The ovarian fibroma is a rare benign tumor which grows from the connective tissue of the ovarian cortex. Among the sex cord-stromal tumors, fibromas are the most commonly encountered subtype accounting for almost two-thirds of neoplasms in this group. We present an unusual case of Fibroma of the ovary presenting later in life.

Fibromas, thecomas and fibro-thecomas are rare benign tumors which grow from the connective tissue of the ovarian cortex. The mean age of occurrence is 45-55 years.[1,2] They are classified under Sex cord-stromal tumors which also include tumors composed of granulosa cells, theca cells, Sertoli cells, Leydig cells, and fibroblasts of stromal origin, singly or in various combinations.[3,4] According to the WHO, thecoma-fibroma tumors are classified into the following categories:
Thecoma-fibroma group
-Typical
-Luteinized
-Cellular fibroma
-Fibrosarcoma
Fibromas are benign tumors developing in the postmenopausal women (over 40 years of age). They usually present as unilateral, solid, firm to hard masses with a bosselated external surface, off white to pearly white in color. They can be bilateral, and usually measure more than 6 cm in diameter. The consistency may be soft and cyst formation is common if edema is associated with the tumor.[5,6] The cut surface shows a whorled pattern with a grayish white stroma and occasional areas of calcification. We present an unusual case of fibroma of the ovary presenting later in life and its surgical management.

A 65 year old postmenopausal woman was referred from a peripheral hospital in view of a large left ovarian cyst (6.2x7.8 cm) diagnosed on ultrasonography (plates not available). She had pain in the left side of the lower abdomen for 7 months, dull aching in nature with no aggravating and relieving factors. She also perceived a mass in her lower abdomen which had gradually progressed in size over 3 months, non tender and of firm consistency. She was a known case of hypertension diagnosed 12 years ago, receiving T. Amlodipine 5mg OD and T. Aspirin 150 mg OD. She had attained menopause 16 years ago, her previous cycles being regular. She had 3 full term normal deliveries followed by tubal ligation done 24 years ago. On examination her vital parameters were within normal limits, blood pressure was 130/80 mm Hg, and general and systemic examination revealed no abnormality. Per abdomen examination revealed a solitary, intraperitoneal, firm to hard mass of 14 to 16 weeks' size arising from the pelvis. It had free side to side mobility. The cervix and vagina appeared healthy on per speculum examination. On vaginal examination the uterus appeared to be of normal size, pushed to the left and posteriorly by an anterolateral firm to hard mass of about 7x8 cm. A provisional diagnosis of left ovarian tumor was made.
Pap smear was atrophic inflammatory. Her hemogram, plasma sugara levels, liver and renal function test results were within normal limits. Contrast enhanced computerized tomography (CECT) of the abdomen and pelvis showed a well defined left ovarian cyst measuring 10 cm in diameter, causing smooth extrinsic impression on the fundus of the urinary bladder. The fat planes were preserved and minimal fluid was noted in pouch of Douglas. Tumor marker CA-125 was 14.49 U/ml. 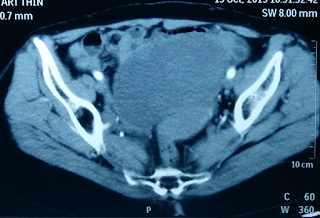 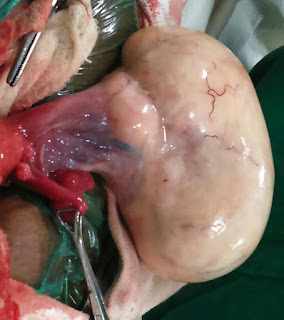 An exploratory laparotomy was performed under epidural anaesthesia through a vertical midline infraumbilical incision. Peritoneal fluid was collected for cytology. In situ findings were of a normal sized uterus with a normal right ovary and fallopian tube. A 6x8x9 cm solid, firm to hard, off white to pearly white colored mass was noted on the left side arising from the left ovary, free from other pelvic structures. Left salpingo-oophorectomy was done and specimen sent for frozen section. Frozen section was suggestive of sex cord stromal tumour favoring thecoma-fibroma. Total abdominal hysterectomy with right salpingo-ophorectomy was done. Infracolic omentectomy was also performed to complete the procedure. Post operative course was uneventful and patient was discharged on the 5th post operative day.
Final histopathology report revealed a mildly cellular spindle cell tumor replacing the entire left ovary. The cells were arrange in multiple fascicles, storiform pattern and in sheets suggestive of left ovarian sex cord stromal tumour – fibroma.

Ovarian fibromas are predominantly benign tumors occurring in the postmenopausal group. Most of these tumors are asymptomatic with the clinical presentation being of vague abdominal pain and discomfort. Sometimes the patient may appreciate a mass in her abdomen which is firm to hard in consistency. They are stromal tumors composed of spindle, oval or round cells producing collagen[7]. Fibromas are usually solid, unilateral, spherical or oval, with a bosselated surface and a glistening white or pearly white appearance.[8] Preoperative diagnosis is difficult. Diagnosis can be aided by imaging and tumor markers. CA 125 is not specific but can be used to suspect malignant change. Elevated CA-125 is usually associated with the presence of ascites[10,11] CECT is helpful in delineating the tumor, its origin and preservation of fat planes. Fibroma should be differentiated from stromal hyperplasia and fibrothecoma. Diagnosis is confirmed only on histopathology. The treatment consists of surgical resection of the tumor which is associated with very low recurrence rates and laparoscopic surgery can be an effective and safe alternative approach. Laparoscopic assisted vaginal hysterectomy can also be done , the tumour being removed in an endobag.[12]
The case presented here was unusual in some respects. The solid tumor was perceived to be a cystic tumor on ultrasonography as well as on CECT. There appears to be an error of both of these investigations. The tumor was much larger than the average size of a fibroma at the time of presentation. Its frozen section report did not diagnose a fibroma and hence, especially considering her age, a total abdominal hysterectomy with bilateral salpingo-oophorectomy with an infracolic omentectomy was performed, though the peritoneal fluid did not show any malignant cells.

Ovarian fibromas are benign tumours of the the ovary, difficult to diagnose pre-operatively and can clinically and biochemically mimic ovarian cysts, tuboovarian mass, uterine myoma or ovarian malignancy. CA 125 levels are not specific for diagnosis but with imaging are helpful to decide the course of treatment which usually consists of surgical resection either by laparotomy or laparoscopic approach.