Intestinal Malrotation In A Case Of Bicornuate Bicollis Uterus

Congenital malformations of the female genital tract may be seen in approximately 5 to 7 percent of the population. They are known to be associated with various other anomalies such as renal, musculoskeletal, gastrointestinal etc. We report an unusual association of an intestinal malrotation with the sigmoid colon on the right side in a case of bicornuate bicollis uterus with a longitudinal vaginal septum.

Müllerian anomalies include various malformations in the female genital tract. They may be associated with renal and anorectal malformations, which occur sporadically, without any familial tendency.[1] Of these anomalies, uterus didelphys due to a failure of fusion of müllerian ducts, is seen in about 11%.[2] In 75% cases of didelphic uterus a longitudinal vaginal septum is seen.[3] Renal anomalies are seen in 20% patients with uterus didelphys, with renal agenesis being the most common anomaly. We report the case of a patient  uterus didelphys  with  intestinal malrotation.

A 23 year old primigravida , married for 2 years, was scheduled for an elective cesarean section for breech presentation at term. The breech presentation was persistent in her third trimester. There was no medical or surgical illness in the past. There was no history of any bowel or urinary bladder related symptoms. Her clinical examination revealed a pulse of 86 beats per minute, blood pressure was 110/70mm of Hg. General and systemic examination revealed no abnormality. Abdominal examination showed uterine size of 38 weeks, breech presentation, and normal fetal heart sounds. A speculum examination showed complete longitudinal vaginal septum and two cervices. A vaginal examination showed a complete longitudinal vaginal septum and both the cervices uneffaced and closed. Ultrasonography (USG) showed a bicornuate uterus, a single live intra uterine gestation in the right horn of the uterus in breech presentation, and no anomalies of maternal urinary tract. Investigations for fitness for anesthesia showed normal findings. An elective lower segment caesarean section was performed. The patient delivered a male child of 2.3 kg with APGAR 9/10. Intraoperative findings revealed pregnancy in the right horn of a bicornuate bicollis uterus. Incidentally it was also found that the sigmoid and the appendix were on maternal right side. There was no intestinal obstruction. The rest of the anatomy was normal.  Post operative period was uneventful and the patient made a complete recovery. 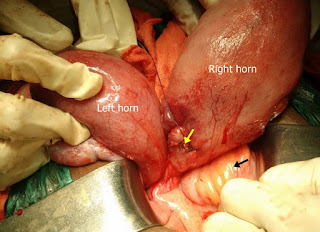 Figure 1. Intraoperative findings: two horns of the uterus are seen from posterior aspect, the medial end of the suture in the lower segment incision of the right horn is seen (yellow arrow). The sigmoid colon is seen on the right side (black arrow). 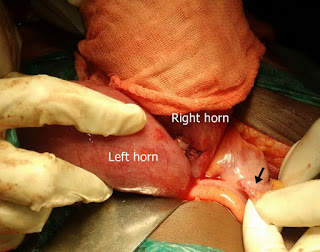 Figure 2. Intraoperative findings: two horns of the uterus are seen from posterior aspect, the appendix is seen behind the right horn (black arrow).

The uterus, fallopian tube, cervix and upper two thirds of the vagina develop from a pair of mullerian ducts while the lower third of the vagina develops separately from the urogenital sinus. The co-existence of müllerian anomalies with renal anomalies ipsilateral to the side of obstruction occurs due to arrest in embryological development at the eighth week of gestation, which may affect both paramesonephric and mesonephric ducts. Renal anomalies like ipsilateral renal agenesis,  renal dysplasia, double collecting system and ectopic ureter are known to be  associated with didelphys uterus.[4] It is also associated with duplication of inferior vena cava, high-riding aortic bifurcation, malposition of ovary and malrotation of intestine.[5] Uterus didelphys is a part of OHVIRA syndrome (obstructed hemivagina, ipsilateral renal anomaly).[6] Malrotation may occur alone or associated with other anomalies like atresia of small bowel. During normal abdominal development, the gut herniates out from the abdominal cavity, where it undergoes a 270 degrees counterclockwise rotation around the superior mesenteric vessels. Following this rotation, the bowel returns to the abdominal cavity, the duodenojejunal loop getting fixed to the left of the midline and the cecum getting fixed in the right lower quadrant. Intestinal nonrotation or incomplete rotation is any variation in this rotation and fixation of the gastrointestinal tract during development. Intestinal rotation and fixation can be interrupted during fetal development at different locations leading to various presentations of disease.[5] Stage I of midgut rotation occurs between 5-10 weeks' gestation, in which the physiologic herniation of the bowel takes place. Nonrotation is the result of arrest in development at stage I. As the gut lengthens without rotation, the mesentery forms a narrow base predisposing to to volvulus. Stage II is at 10 weeks  of gestation, in which the bowel returns to the abdominal cavity. Incomplete rotation is due to arrest in stage II. It is likely to result in duodenal obstruction by compression of its third portio, or due to internal herniations. Stage III is from 11 weeks of gestation to term, in which the cecum descends to the right lower quadrant and the mesenteries get fixed.
This case is interesting because of the association of malformations of the genital tract and gastrointestinal tract. The incomplete rotation of the bowel made the patient vulnerable to intestinal obstruction. She was counseled accoridngly and advised to retain the operative notes carefully and report to a medical center in case she developed constipation and vomiting associated with abdominal distension at any time in future. No operative treatment was given for the incomplete rotation because none was warranted.