Intramural pregnancy with implantation in a previous cesarean section (CS) scar is probably the rarest location for ectopic pregnancy. The true incidence of pregnancy occurring in a uterine scar has not been determined because so few cases have been reported in the literature. However, the incidence of such cases seems to be on the rise. Here we present a case of a 28-year-old woman with a history of previous 1 CS 5 years ago, who presented with a history of 2 months amenorrhea with positive urine pregnancy test and pain in abdomen. USG was suggestive of scar ectopic, which we managed laparoscopically.

A 28-year-old woman came to our OPD with complaints of pain in abdomen with a history of 2 months amenorrhea. A urine pregnancy test was done and was positive. Patient was second gravida with a history of previous one LSCS done 5 years back. An ultrasonography was done which showed a regular endometrial cavity with a gestational sac at the anterior border of the myometrium corresponding to 7 weeks pregnancy suggestive of a scar ectopic pregnancy. On examination, patient had tenderness over the lower abdomen. On vaginal examination uterus was 6-8 weeks size. External os was closed. 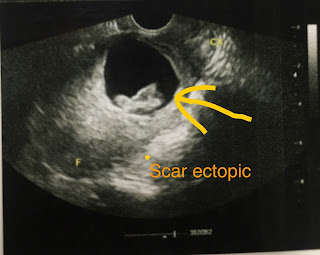 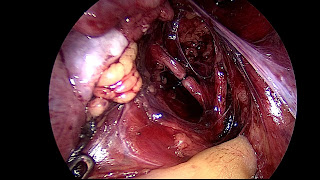 Local injection of vasopressin was done around the lower uterine scar area to minimize the bleeding. The adhesions over the previous uterine scar were separated. Bladder peritoneum was dissected off the uterus. After separating the bladder peritoneum off the uterus, a clear blue bulge was visible protruding from the uterine scar. The thinned out uterine wall over the protruding sac was incised. The gestational sac was exposed and was enucleated completely along with the fetus and the choriodecidual tissue and were removed in an endo-bag. The previous uterine scar was excised. After confirming hemostasis, the uterine incision was closed with polyglactin No. 1. Postoperative period was uneventful and patient was discharged on 3rd day. 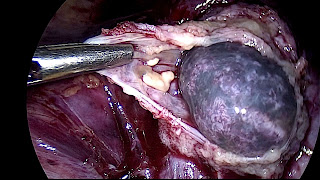 Figure 3. Enucleation of sac being performed. 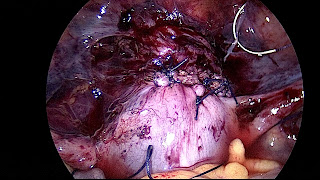 
Primary open laparotomy may be considered in cases presenting late, or in shock or non-availability of endoscopic expertise and instruments. Various other treatment modalities have also been used in cases of scar ectopic pregnancies which include systemic or local methotrexate, or hysteroscopic evacuation of ectopic pregnancy. A simple dilatation and curettage has also been done but in a review of literature by Arslan [7], out of the 9 women who underwent dilatation and curettage, 8 women required surgical intervention due to complications of heavy bleeding during dilatation and curettage.
Our patient underwent a successful laparoscopic approach with minimal amount of bleeding and no intra -operative complications.