Huge Fibroid Of The Round Ligament Masquerading As Adnexal Mass

The round ligament extends from the cornual end of uterus through the inguinal canal and terminates in the region of the mons pubis and labia majora. Embryologically, it is the female equivalent of the gubernaculum testis. This structure is responsible for the descent of the ovary from the posterior abdominal wall to the uterus. It is mainly composed of smooth muscle fibers, connective tissue, vessels, and nerves with a mesothelial coating.[1,2]  Common presentation of round ligament pathologies are inguinal swelling mimicking an incarcerated/ irreducible hernia/ inguinal secondaries/ lymph node.  Leiomyoma of the round ligament is a rare presentation occurring predominantly in premenopausal middle-aged women. Abdominal, inguinal, and vulvar locations for these fibroids have been described.[3] Its Incidence is not known exactly, and the mean age ranges from 13 to 70 years. Local excision is recommended as definitive therapy. We report a case of round ligament fibroid which was operated as an adnexal mass and histopathologically it proved to be leiomyoma.

A 42 year old woman presented  with complaints of  swelling in the right lower abdomen for 4 months. Complain of pain in abdomen was for the last 2 months. She had no history of bladder, bowel complaints, weight loss, anorexia or fever. Her menstrual cycles were regular with cycle of 30 days, duration of 3-4 days and average blood flow.
On examination, the patient was afebrile, pulse rate was 88 / min, and BP of 120/80 mm of Hg. On systemic examination, chest was bilaterally clear and S1, S2 were normal.  On Per abdominal examination, a supra pubic mass of approximately 18 weeks size gravid uterus was palpated. It appeared to be arising from the pelvis, it had irregular margins, smooth surface, was firm to hard in consistency,  was non-tender, moved transversely and the lower limit could not be reached. No clinically evident ascites was present. The temperature of the overlying skin was normal. On per speculum examination, cervix was high up. Cervix and vagina were healthy and no abnormal discharge was present. On per vaginal examination, a mass was felt through the right fornix measuring 10x12 cm size, non-tender, firm, with a smooth surface, and restricted mobility. Left fornix was clear. Cervix was backward, uterus was anteverted, and deviated to the left side. Exact size of the uterus could not be made out.
Tumor marker results detected serum CA-125 levels as 33.50 U/ml, serum AFP levels as 2.65 IU/ml, CEA levels as 3 ng/ml, and serum CA19.9 levels as 55.6 IU/L. Pap smear was normal. Ultrasound (USG) abdomen and pelvis showed a round, complex, cystic mass in the right adnexa with heterogeneous, and heteroechoic texture. Ovaries were not visualized separately. Uterus looked normal but was displaced by the mass. Size of the mass was 9x8x10.6 cm.  It was reported as right adnexal complex cystic mass.
CT scan showed uterus as normal in shape and size. No obvious lesion was seen in the myometrium.  Normal endometrium was visualized with no evidence of fluid in the endometrial cavity. Cervix was normal. Surrounding parametrial fat planes were maintained. Right adnexa showed a well defined round, cystic space occupying lesion with size upto 10x10x6 cms. Post contrast image showed peripheral thick rim of enhancement. Surrounding mesentry was thickened. There was no evidence of ascites. A complex, thick walled, space occupying lesion in the right adnexa most likely an inflammatory tubo-ovarian mass (Pyosalpinx) was seen. (Figure 1)
She underwent an elective laparotomy. Peroperatively, a solid mass of 10x8 cm arising from the right round ligament was seen. (Figure 2) Omentum and bowel was adhered to the anterior surface of the mass. Blunt and sharp dissection was done. Pus like discharge from the mass was sent for culture and sensitivity. Peritoneal lavage was done. Mass was excised. Uterus, bilateral tubes and ovaries were normal. Peritoneal fluid cytology was negative for malignant cells
Pathologist report stated grossly specimen as round ligament mass received as adnexal mass with attached fibro-fatty tissue. A single thickened partially cystic mass identified measuring   11x9x8.5 cm. Outer surface was smooth and congested. Cut surface showed a single cavity with solid encapsulated area measuring 9x6x4 cm. On microscopic examination section from the mass showed a benign smooth muscle neoplasm disposed in interlacing whorled fascicles along with interspersed hyalinated and degenerated smooth muscles by well vascularized connective tissue infiltrated by chronic inflammatory infiltrate comprising of lymphocytes, plasma cells and histiocytes with no evidence of any significant atypia. Individual smooth muscle showed cigar shaped nuclei in an eosinophilic fibrillary cytoplasm. (Figure 3 a,b,c) 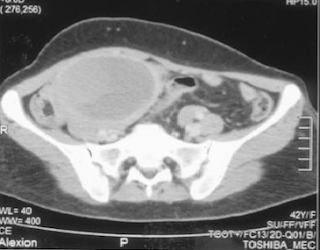 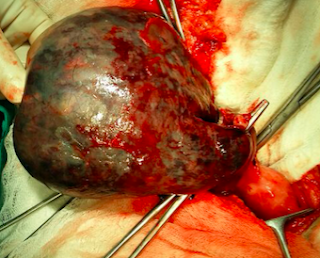 Figure 2.  Mass seen arising from the right round ligament of uterus

Tumors of the round ligament of the uterus are quite rare. The most commonly found tumors are leiomyomas, followed by endometriosis and mesothelial cysts.[1,4–7]  Transformation of myofibrous structure of the female genital tract to leiomyoma involves somatic mutations of normal smooth muscle and a complex interaction between sex steroids and local growth factors. Estrogen is the major promoter of the myoma growth; however, the role of progesterone is still unclear, as both receptors have been found in the round ligament.[3,8,9]
The differentiation between benign and malignant tumors can be difficult as the major criteria for malignancy are mitotic figures, nuclear atypia, and necrosis.[4,10] In 50% of the reported cases, the lesions are associated with uterine leiomyomas.[4] Mass lesions that involve the extra-peritoneal portion of the round ligament as it passes through the inguinal ligament can mimic an incarcerated inguinal hernia or inguinal adenopathy.
Location of round ligament fibroid at abdominal, inguinal and vulvar regions had been quoted in literature but we did not find round ligament fibroid presenting as adnexal mass in the literature.
Preoperative imaging techniques such as computed tomography (CT) scans can be helpful in diagnosing the condition, but it is not usually employed before surgical exploration.[11] Leiomyoma presents as a circumscribed, heterogeneous, dense mass in CT images.[1,11,12] It may contain calcification that may be mottled, whorled, streaked, and curvilinear.[11] Surgical excision of the tumor is adequate treatment as it would distinguish between the rare leiomyoma and an inguinal hernia or adenopathy.[1]
In our case, the mass presented like an adnexal mass, with symptoms of abdominal discomfort and pain . Clinically and radiologically it was diagnosed as an adnexal mass but   on laparotomy it was seen to be a mass arising from the round ligament. Histopathology   proved it to be leiomyoma of the round ligament. Various presentation of round ligament lesion have been shown in literature including fibroid of the round ligament but for the adnexal location of fibroid of round ligament, this is first case reported.