Cervical polyps are relatively common benign lesions seen often in 4th-5th decade of life. They usually develop as a reactive change to chronic inflammation, with dilated cervical glands and microglandular hyperplasia can be seen on histopathology. Giant polyps are rare and can be a diagnostic dilemma. Here we present a report on a giant cervical polyp in a 43 year old multigravida.

A cervical polyp is usually a benign, small, pedunculated tumor less than 2 cm, incidentally diagnosed on routine examination. Large cervical polyps (>4 cm) are rare.[1,2] They could present as a mass protruding out of vaginal introitus,. Their size and clinical presentation can mimic a cervical neoplasia.  They are commonly seen in multiparous  women, usually in the 4- 5th decade of life.[2] Radiological investigations like ultrasonography (USG) can help in distinguishing cervical polyps from large protruding submucous leiomyomatous  polyps. They are generally treated surgically (simple hysterocopic or under vision polypectomy).

A   43  year old woman, para 2 living 2, with previous 2 uneventful normal vaginal deliveries,  presented with complaints of a soft painless mass in vagina, progressively increasing in size over 1.5 years, protruding on increased abdominal pressure like coughing or straining since 6 months.  She complained of menorrhagia for 4-5 cycles, associated with a dull abdominal pain radiating to lower back. She also noticed a change in the size of the mass with menses - it would increase in size during menses. She had a similar history 4 years ago, when she was operated for the same and the histopathological report of the mass showed the growth to be a cervical leiomyoma. On per speculum examination, there was a 4X5X3 cm sessile mass arising from the posterior lip of the cervix, extending out beyond the vulva. It was firm and variegated in  consistency. It was covered over by healthy epithelium, like that of portio vaginalis. Did no bleed on touch, was reducible but with difficulty. The first impression was that it was an enterocele. But the diagnosis was made when the cervical external os was seen in front of the mass. On per vaginal examination, uterus was 6 weeks sized and anteverted; lateral fornices were free and nontender. Pelvic USG revealed the mass to be cervical polypoidal growth. Pap smear was severe inflammatory. The patient was counseled and she opted for vaginal hysterectomy rather than removal of the polyp, since the abnormal uterine bleeding would not be cured by polypectomy.
Intraopertaively, it was difficult to access the posterior peritoneal pouch due to the growth protruding from posterior cervical lip. After meticulous dissection of the anterior as well as posterior peritoneal pouch, uterosacral and cardinal ligaments were clamped, cut and transfixed with No. 1 polyglactin suture, without excising the large growth on the posterior lip of cervix. Uterine arteries bilaterally were clamped, cut and ligated. Uterus was bisected into two halves above the level of the polyp, cornual ends  were clamped and transfixed, and specimen (uterus+cervix+polyp) was delivered and sent for histopathological examination.
She did well postoperatively and subsequently on followup. Histopathological examination revealed the section from the cervical growth showing polypoidal tissue covered with stratified squamous epithelium, underlying tissue showed odematous stroma, cervix showed squamous metaplasia. 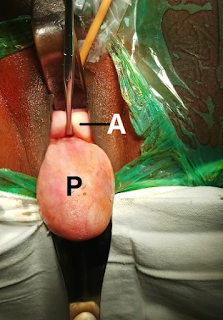 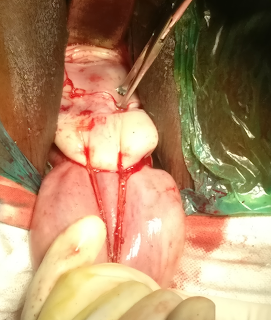 Figure 2.  Dissection of the uterovesical pouch of peritoneum. 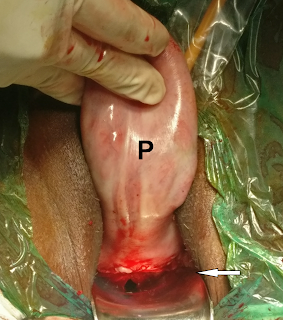 Figure 3.  Dissection of the posterior pouch of peritoneum. Posterior aspect of the polyp is seen (P). Soonawala's speculum is seen inserted into the open posterior peritoneal pouch (arrow). 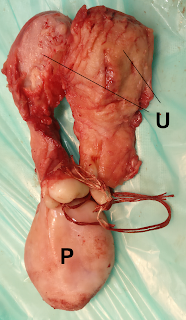 This is a case report of a giant cervical polyp in a multiparous adult patient. Benign cervical polyps  are common tumors of the cervix, although usually they are small and found in middle aged and older women, rare in adolescent  age group.[3-5] They may arise from the endocervix (lined by glandular epithelium) and ectocervix (lined by squamous epithelium- less commonly observed). Cervical polyps can present with symptoms of leucorrhoea or malodorous discharge, protruding mass, postcoital bleeding, dyspareunia.[2] Large polyps could also present as  mass protruding through introitus, with micturition difficulties and pelvic discomfort.  The differential diagnosis clinically could be of cervical leiomyoma, cervical malignancy, large endometrial polyps protruding through the os, large nabothian cyst, vascular neoplasms, squamous papilloma, chronic uterine inversion, uterine rhabdomyosarcoma.[6,7] The possible complications of polyp can range from ulcerations leading to secondary infection, infertility due to obstruction of the canal, and torsion of large polyps causing excruciating pain. Only 1.7% of cervical polyps undergo malignant transformation.[7] Pap smear should be done as a screening procedure. Radiological investigations such as USG or magnetic resonance imaging can be used to ascertain the diagnosis and the extent in the large polyps. Definitve diagnosis is always histological, hence surgical excision of the polyp, especially a large polyp is done.[6-8] Small asymptomatic polyps are not necessarily excised, the patient can be followed up over a long time. Smaller polyps can be grasped with a clamp and twisted free and base can be cauterized for hemostasis. Resection should be as complete as possible to avoid regrowths. Most of the giant cervical polyps reported are benign but histopathological examination is must to rule out malignancy.
The polyp in the patient presented here was unusual. Its base was of the same diameter as its pedicle, like downward continuation of the posterior lip of the cervix. There was no ulceration of the epithelium over it, which was very unusual. It was a recurrent polyp. The recurrence must have been due to residual part of the polyp after the first excision, and the residue must have been left behind due to absence of a well defined pedicle as was found this time too.