A chronic cervical perforation forms between the cervical canal and external aspect of the portio vaginalis. It can be due to non-healing of cervical injury or necrosis secondary to inflammation or malignancy. A spontaneous cervical perforation has not been reported in the world literature so far. We report one such case.

A 23 year old woman presented to us for management of primary infertility. She had been married for three years and cohabiting since then. She had menarche at the age of 12 years. Her past and present menstrual cycles were every 28 days, the flow lasting for 3-4 days, associated with mild dysmenorrhea. Her medical and surgical history was not contributory. There was no abnormal vaginal bleeding or leucorrhea. There was no contact with tuberculosis. She had not undergone and vaginal operation or insertion of any foreign body or chemical substance into the vagina. Her vital parameters were within normal limits. Her general and systemic examination revealed no abnormality. A vaginal speculum examination showed an irregular opening on the posterior wall of the portio vaginalis. It was found to be communicating with the cervical canal, as found on passage of a uterine sound through the external os, which exited through the perforation. Edges of the perforation were firm and did not bleed to touch.
Her investigations for fitness for anesthesia were normal. Her husband’s semen report was satisfactory. There was no evidence suggestive of tuberculosis on hemogram and chest radiograph. Hysteroscopy, laparoscopy, chromopertubation and endometrial curettage were done. The methylene blue solution dye leaked back into the vagina through the perforation when injected through a Colvin’s cannula passed through the external os. So we had to pass the cannula through the perforation site into the uterine cavity before injecting the dye. That entered the uterine cavity successfully and did not leak back. Hysteroscopy findings were normal. Laparoscopy showed normal organs and some adhesions in the pouch of Douglas, suggestive of past pelvic infection. There was no evidence suggestive of abdominal and pelvic tuberculosis. Both of the fallopian tubes were patent. The cervical perforation was found to be 1 cm in diameter. Its upper limit was close to the internal os. Two biopsies were obtained from the edges of the perforation. The biopsy sites did not bleed at all. The patient made an uneventful recovery. Histopathology showed endometrium in the proliferaive phase. Cervical biopsies showed chronic cervicitis, but no evidence of tuberculosis or malignancy. 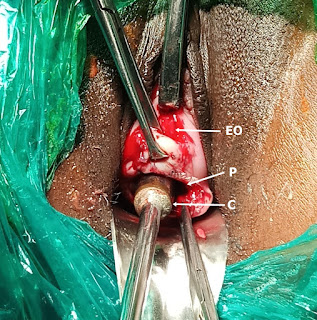 The cervical perforation was repaired after a month. The edges were excised. The raw edges did not bleed at all. The defect was repaired with interrupted sutures of No. 1-0 polyglactin. The wound was found to have healed well after a month. 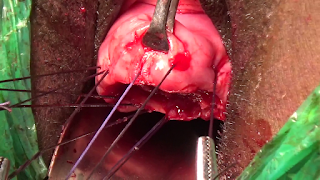 Figure 2. Operative repair of cervical perforation. The sutures are held long until all sutures have been placed. Then they will be tied one by one. 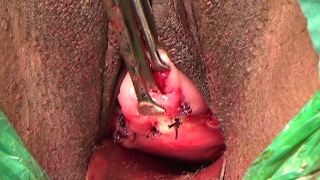 Figure 3. Operative repair of cervical perforation: the end result. Allis’ forceps have been applied to the anterior and posterior cervical lips.

Histopathology of the excised edges showed chronic inflammation but no evidence of tuberculosis. GeneXpert test - a cartridge based nucleic acid amplification test (CB-NAAT) - on cervical biopsy for tuberculosis was negative. The patient was advised to undergo follicular studies for ovulation.

Traumatic perforation of the cervix is much more common than that due to a disease process. A second trimester abortion is a not uncommon cause.[1-3] It can occur after a cervical cerclage, if the suture cuts through, especially when the cerclage is not removed in presence of uncontrolled uterine contractions.[4] A perforation caused by a cervical dilator during rapid cervical dilatation usually heals, but it may persist with chronic inflammation. Chronic perforation by vertical limb of an intrauterine contraceptive device may produce a perforation that does not heal.[5] Cervical tuberculosis produces cervical lesions that ulcerate.[6-9] However a through and through perforation has not been reported so far.
In our case tuberculosis was the most likely diagnosis, as the edges showed chronic inflammation and the tissue was firm, fibrous and did not bleed. However both histopathology and CB-NAAT test were negative for tuberculosis. There was no evidence of tuberculosis on chest radiography, hemogram, hysteroscopy, laparoscopy and endometrial histopathology. Another possibility considered was a cancer that did not bleed, like a scirrhous carcinoma of the breast. However such a cancer is extremely rare in the cervix. It was ruled out anyway on histopathological examination of the tissue in the edge of the lesion.
Thus the necrosis and perforation of the posterior cervical wall in this case was spontaneous. No source of the chronic inflammation could be identified. This patient is likely to require a cervical cerclage during pregnancy, as the upper edge of the  perforation was at the internal os, which was open during the operative procedure performed on her. The repair of the perforation might not have restored competence of the ineternal os.

We thank Dr Shruti Panchbudhe for the operative pictures.