Paraganglioma of Bladder in Pregnancy

A paraganglioma of the urinary bladder is a rare tumor that develops from the chromaffin tissue of the sympathetic nervous system situated outside the adrenal medulla. It is even more rare in pregnancy. We present a rare case that became symptomatic only in successive pregnancies.

A paraganglioma, also known as extra-adrenal pheochromocytoma, is an extra-adrenal tumor. It develops from the chromaffin tissue of the sympathetic nervous system  outside the adrenal medulla. It can cause severe hypertension and its deleterious effects onthe mother and fetus both. Diagnosis and management of a paraganglioma of the urinary bladder may be more difficult in pregnancy.

A 33 year old woman, married for 3 years, gravida 2 para 1 living 0, with 3 months of amenorrhea, presented with frank hematuria and occasional micturition syncope during the last 6 days. There was no history of any pain in abdomen or from loin to groin, and no dysuria. She gave a history of similar occurrence during her last pregnancy a year ago, which had been complicated by severe hypertension, convulsions, and had ended in a stillbirth. The symptoms had resolved after the childbirth, and had not recurred until 6 days ago. Her general condition was fair, pulse rate 68/min, respiratory rate 18/min, and blood pressure 120/70 mm Hg. Systemic examination revealed no abnormality. The uterus was of 12-14 weeks’ size. Speculum examination showed no abnormality. Vaginal examination showed a closed cervix, and a 3x1.5x1.5 cm transverse, nontender mass in the area of the urinary bladder, behind the pubes. A diagnosis of a bladder mass was made. Abdominal and pelvic ultrasonography (USG) showed a 6.5x5.5 cm sized mass in the inferior wall of the bladder, a 10.8x5.6 cm hematoma within the bladder and an intrauterine gestation of 12 weeks. Magentic resonance imaging (MRI) of the abdomen and pelvis showed a 5.3x4.8x5.4 cm mass in the left and inferior to the urinary bladder, a blood clot in the bladder, and an intrauterine gestation of 12 weeks. There was no mass in the adrenal glands. A self retaining urinary catheter was passed into the bladder. Plasma metanephrine level was found to be 126 picogram/ml. Hemogram, fasting and postprandial blood sugar levels, liver and renal function test results were normal, except that her hemoglobin level was 9 g/dL.
Her blood pressure showed episodic elevation to 149/90 mm Hg over a number of days. She was administered amlodipine 5 mg qd, prazosin 2.5 mg qd by the endocrinologist as a preventive measure, along with adequate hydration and salt intake. 17 alpha hydroxyprogesterone caproate 250 mg deep IM was administered to prevent an abortion triggered by operation on the bladder. Two units of packed red cells were transfused. Transurethral biopsy of the tumor was done. Its histopathology showed it to be a paraganglioma of the bladder. MRI brain showed no metastases. Partial cystectomy along with excision of the paraganglioma was done. After insertion of DJ stents into the ureters and placing a suprapubic drain, the bladder was reconstructed. The abdomen was closed after placing two intraperitoneal drains. The patient’s blood pressure rose to 190/110 mm Hg during surgery, but came down to 90/60 mm Hg after surgery. She had to be administered a dopamine infusion to maintain her blood pressure for 12 hours. She made an uneventful recovery thereafter.
The tumor was unencapsulated, measuring 8x6x4 cm with a dark brown color. Smooth muscle fibres of the urinary bladder could be identified at the periphery. The formalin fixative used to fix the specimen had a light brown color (figure 1). Histology showed the tumor to be composed of large sheets of basophilic polygonal neoplastic cells situated amidst the muscularis propria of the urinary bladder. The sheets had a focal Zell Ballen pattern i.e. nest of cells surrounded by a thin fibrovascular stroma. Individual cells had moderately pleomorphic round nuclei with prominent nucleoli and granular basophilic cytoplasm. The diagnosis was a paraganglioma of the urinary bladder (figures 2, 3, and 4). 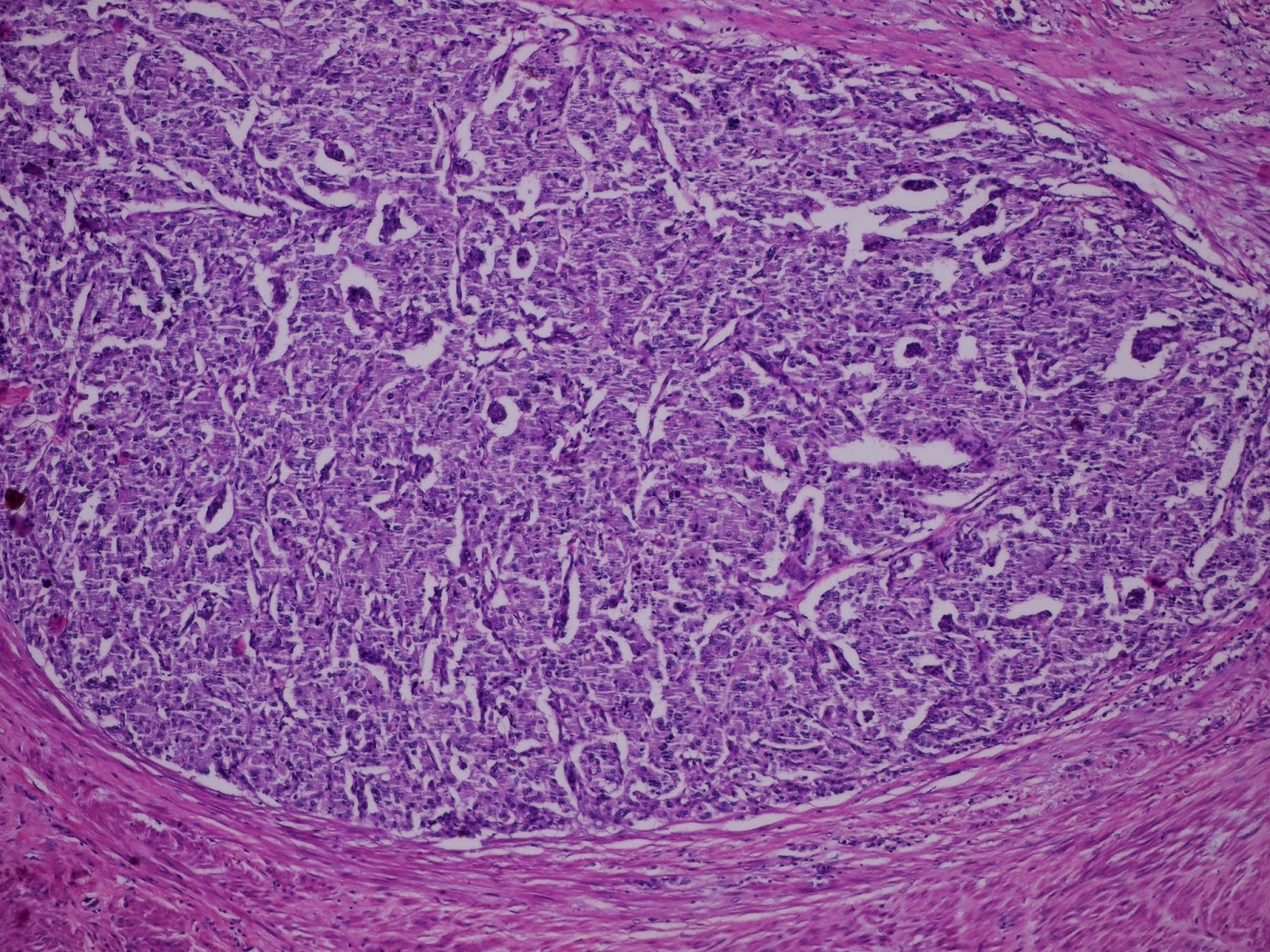 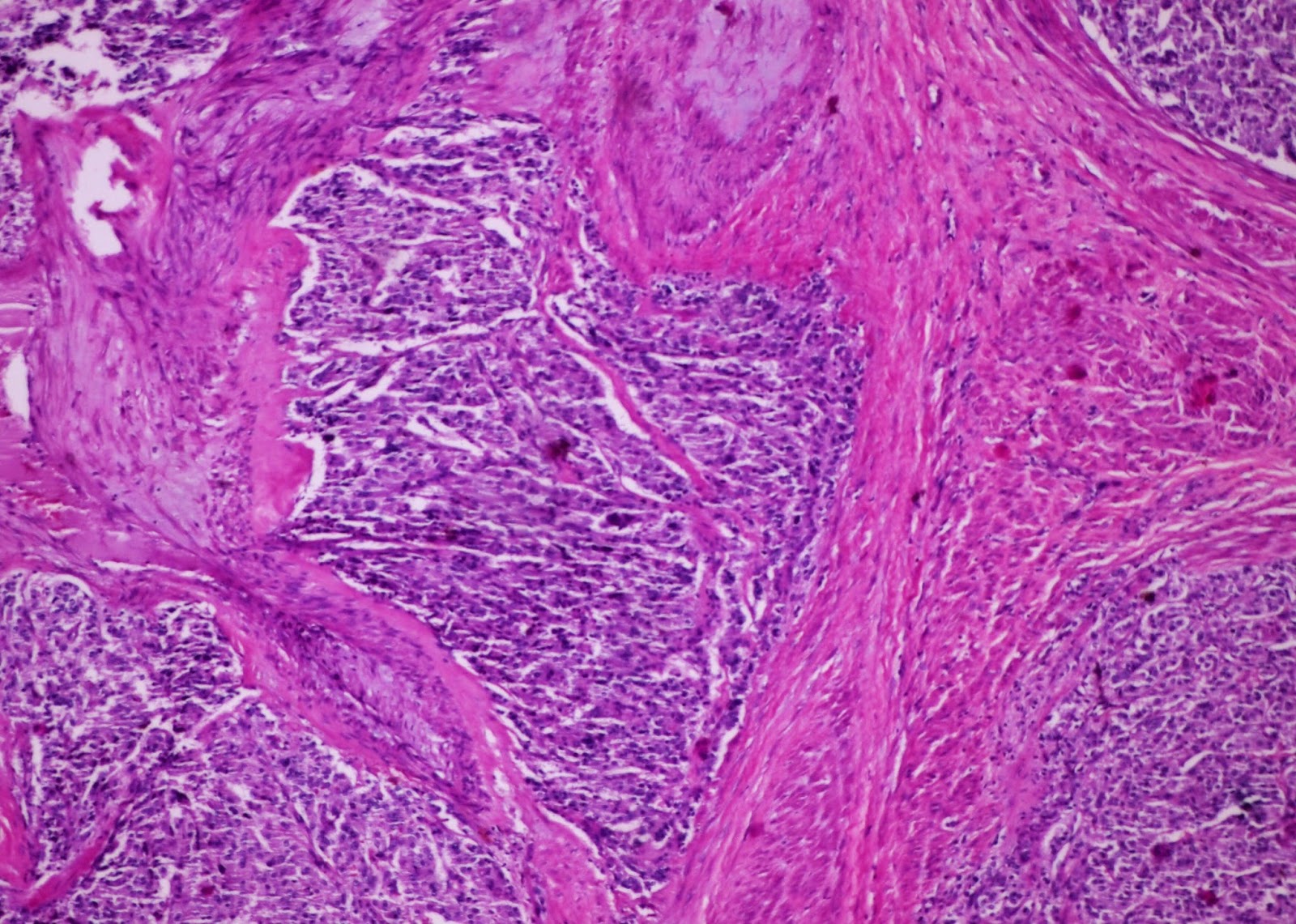 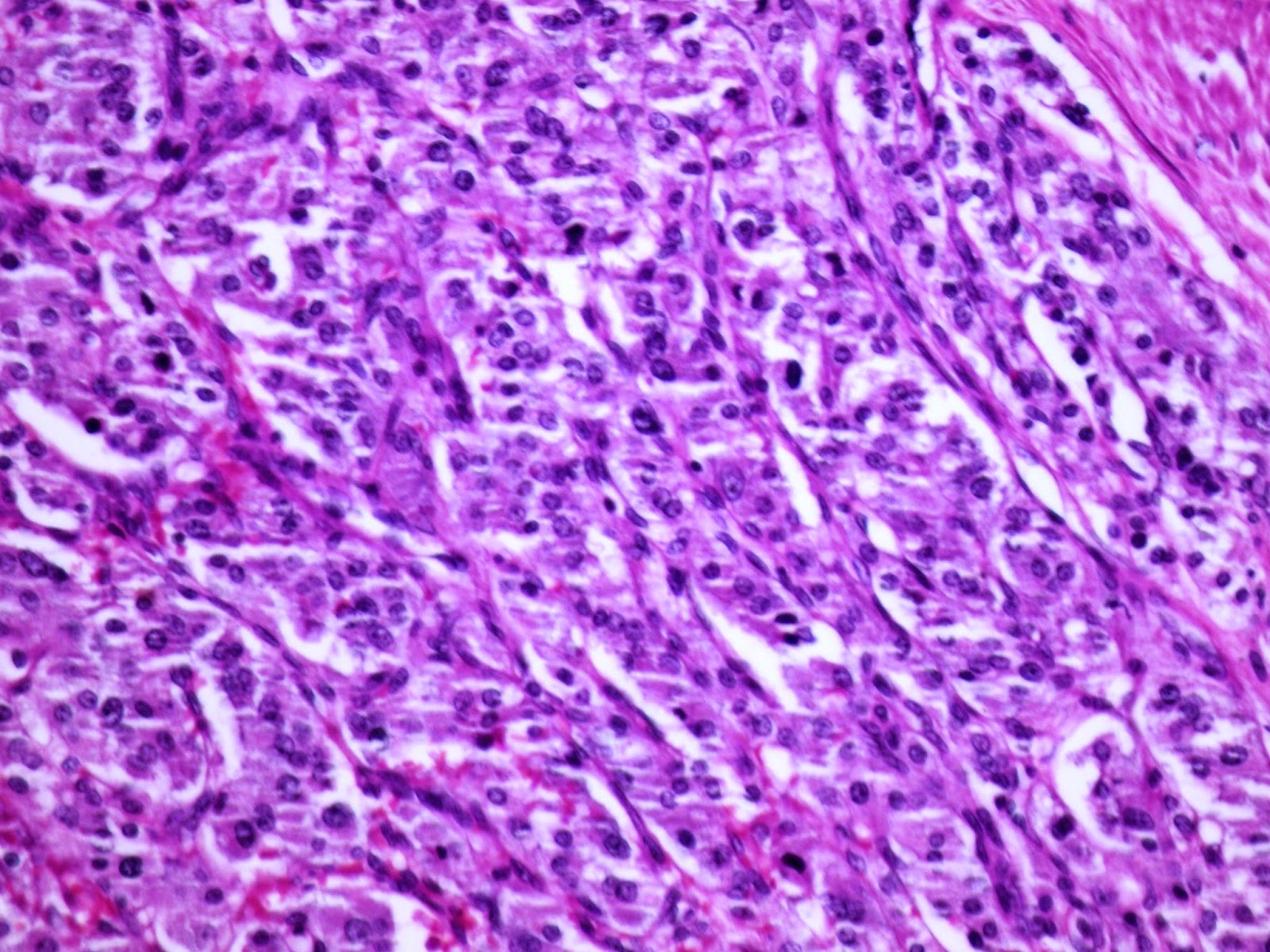 The patient received adequate antenatal care. She had some incontinence of urine up to term, which was explained to be due to reduced capacity of the bladder and urge incontinence. She underwent a cesarean section at 38 weeks of gestation for a breech presentation and uteroplacental insufficiency, delivering a baby weighing 2.8 kg. Postoperatively she was put on darifenacin 7.5 mg qd. She was advised regular follow up examinations to detect any recurrence.

A paraganglioma, also known as extra-adrenal pheochromocytoma, is an extra-adrenal tumor that develops from the chromaffin tissue of the sympathetic nervous system situated outside the adrenal medulla.[1] It accounts for 6% of all paragangliomas and less than 0.05% of all bladder tumors.[2] It is more common in women than in men ( 3:1), mainly in the age group 30-50.[3] About 17% of them are hormonally inactive.[4]
Its clinical features include headache, palpitations, sweating, and fainting (especially with micturition), paroxysmal hypertension and hematuria. USG detects it in 8% cases, showing a submucosal homogeneous, well delineated, vascular mass, sometimes with   necrosis at its center. MRI in diagnostic in almost 100% cases, also defining its extension accurately.[5,6] Cystoscopy both shows the mass and permits transurethral resection. A biopsy is not recommended, as it can cause serious hemorrhage, hypertensive crisis, and its diagnostic rate is low. The histological features of the tumor are as described in this case. About 5-15% cases are malignant. Histology cannot distinguish between benign and malignant tumors, and only local invasion or distant metastases are diagnostic of malignancy.[7,8] Transurethral resection is adequate if the tumor is less than 2-3 cm in size and does not infiltrate deep.[9] In all other cases open surgery is preferred. Pregnancy does not contraindicate the diagnostic and therapeutic approaches discussed. It is a unique situation in that the hypertension caused by the tumor may be mistaken for toxemia of pregnancy.[10] Our case was unique in that she had hematuria suggestive of the presence of a bladder mass even in her past pregnancy associated with hypertension, presumably due to the paraganglioma, which did not cause any symptoms in between pregnancies. This then would be the first case of a paraganglioma of the bladder that became manifest during successive pregnancies only. This patient did not have any family history of such a disorder. However she was counseled to have the family members screened inview of about 10% cases being familial or genetic in nature.[11] She was also advised to have at least one follow-up every year, since recurrences as late as 10 years are known to occur.[12]