Ovarian hyperstimulation syndrome (OHSS) is an iatrogenic complication following the use of clomiphene citrate and gonadotropins for ovulation induction and ovarian stimulation in assisted reproductive technology. It is characterized by multicystic ovarian enlargement and fluid displacement from intravascular to extravascular compartment due to increased capillary permeability; in its severe form it can be potentially life-threatening, requiring intensive care. Serum human chorionic gonadotropin (hCG), either exogenous or endogenous, is the triggering factor and the action is mediated through vascular endothelial growth factor.[1] We report a case of moderate OHSS following the indiscriminate use of clomiphene and gonadotropins for ovulation induction in a patient with polycystic ovarian disease. She was managed conservatively, conceived but pregnancy was terminated due to fetal malformation.

The incidence of OHSS is approximately 0.3 to 5% amongst women undergoing in vitro fertilization (IVF) or intrauterine insemination (IUI).[1] Risk factors include young age, low body weight; higher doses of exogenous gonadotropins, rapidly rising serum estradiol levels and previous episode of OHSS. Women with PCOS have a higher incidence of OHSS after gonadotropin therapy owing to a high number of follicles recruited. OHSS usually resolves spontaneously over several days, but can last longer especially in conception cycles.
Mild, moderate and severe forms are described; in mild OHSS, only ovarian enlargement is present on ultrasonography (USG), while in moderate form, there is ascites with mild abdominal distension. Severe form, characterized by hemoconcentration, thrombosis, oliguria, pleural effusion, and rarely pericardial effusion and respiratory distress, is seen in only 0.5% patients.  Hepatorenal failure, acute respiratory distress syndrome (ARDS), thromboembolism and even death can occur as complications.[2]


A 29 year old woman, married for 5 years, a case of primary infertility, was referred to us on day 26 of a treatment cycle, with complaints of gradually increasing abdominal pain, distension and vomiting since 12 days, and ultrasonography showing features of OHSS. She had received ovulation induction for infertility in a private nursing home with tablet clomiphene citrate 100 mg qd from 3rd to 7th day of menses along with human menopausal gonadotropin (HMG) 75 IU intramuscularly on days 5, 6, 7, 8 and 9. Folliculometry began on day 10 and showed 8 follicles in right ovary and 7 in left ovary, which reached size of 17- 18 mm on day 15 in both the ovaries; subsequently 4 follicles in right and 3 follicles in left ovary ruptured on Day 22. Serum estradiol was not estimated. The patient had vomiting and abdominal pain from day 14 with gradually increasing abdominal distension which became evident on day 20 of the cycle. On day 22, ascites was noted on ultrasonography suggestive of OHSS, at which time she was referred. However she presented on day 26. Baseline hemoglobin was 13 g%, INR was 1.27, bilirubin was 1.05 mg%, creatinine was 1.4 mg% and electrolytes were normal. Ultrasonography showed bilateral moderately enlarged ovaries with hemorrhagic follicles with moderate ascites and bilateral mild pleural effusion. 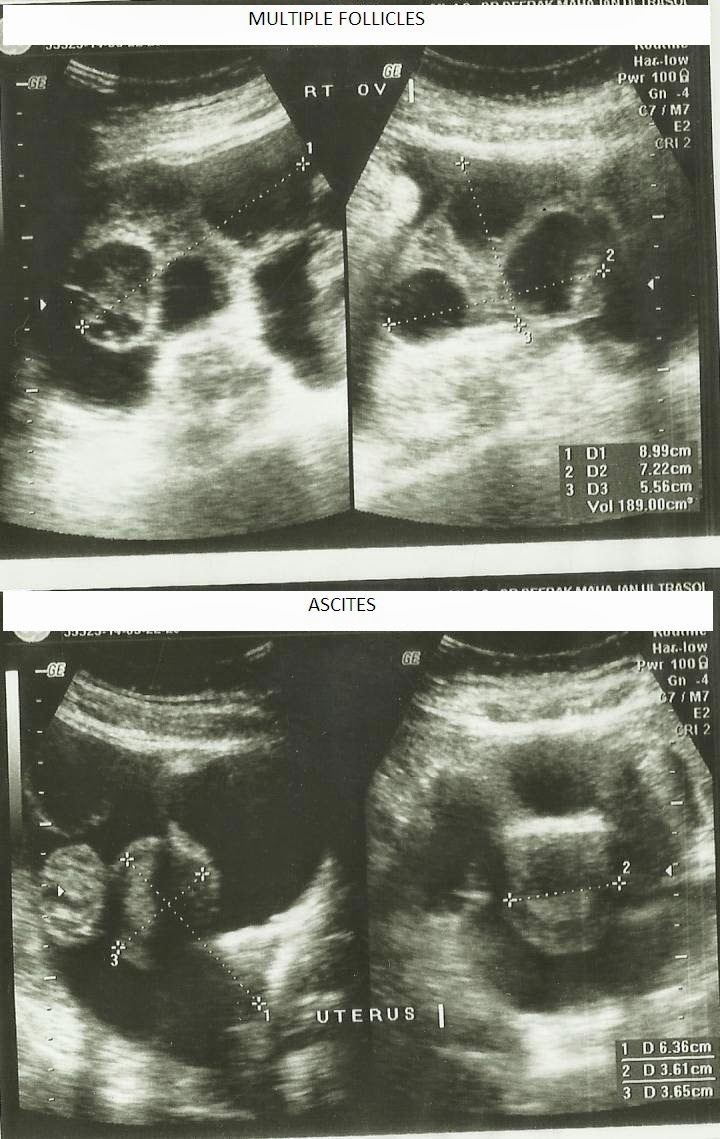 The patient was managed conservatively: adequate hydration in the form of intravenous normal saline and 5% dextrose, supplementation of multivitamins and potassium chloride, and intravenous paracetamol infusion for analgesia were given. Her weight, abdominal girth, vital parameters, fluid intake and urine output, serum electrolytes and coagulation profile were monitored daily. Electrolytes remained normal; INR decreased to 1.0 within 2 days. Liver and renal function tests were repeated every third day; bilirubin remained normal and creatinine fell to 1.0 mg%. She was observed for breathlessness, increment in the abdominal girth or any coagulation abnormality. Pleural effusion was mild hence did not require thoracocentesis. Her symptoms reduced over a period of 8 to 10 days; abdominal distension, pain and vomiting all subsided.


Ten days after admission (day 36 of the cycle), as patient was amenorrheic, βhCG level was done which was 1687 mIU/ml, this doubled within 48 hours (4945 mIU/ml). USG showed a small gestation sac; hence supportive treatment with natural micronized progesterone was started and patient was discharged after 14 days of admission and advised to follow up regularly. A live pregnancy was noted on ultrasonography at 7 weeks with persistent mild ascites and bilateral pleural effusion. Unfortunately, at 12 weeks a large cystic hygroma was noted on ultrasonography and dual marker showed increased risk of chromosomal anomaly. Patient was counseled for CVS (chorionic villous sampling) but she opted for medical termination of pregnancy. 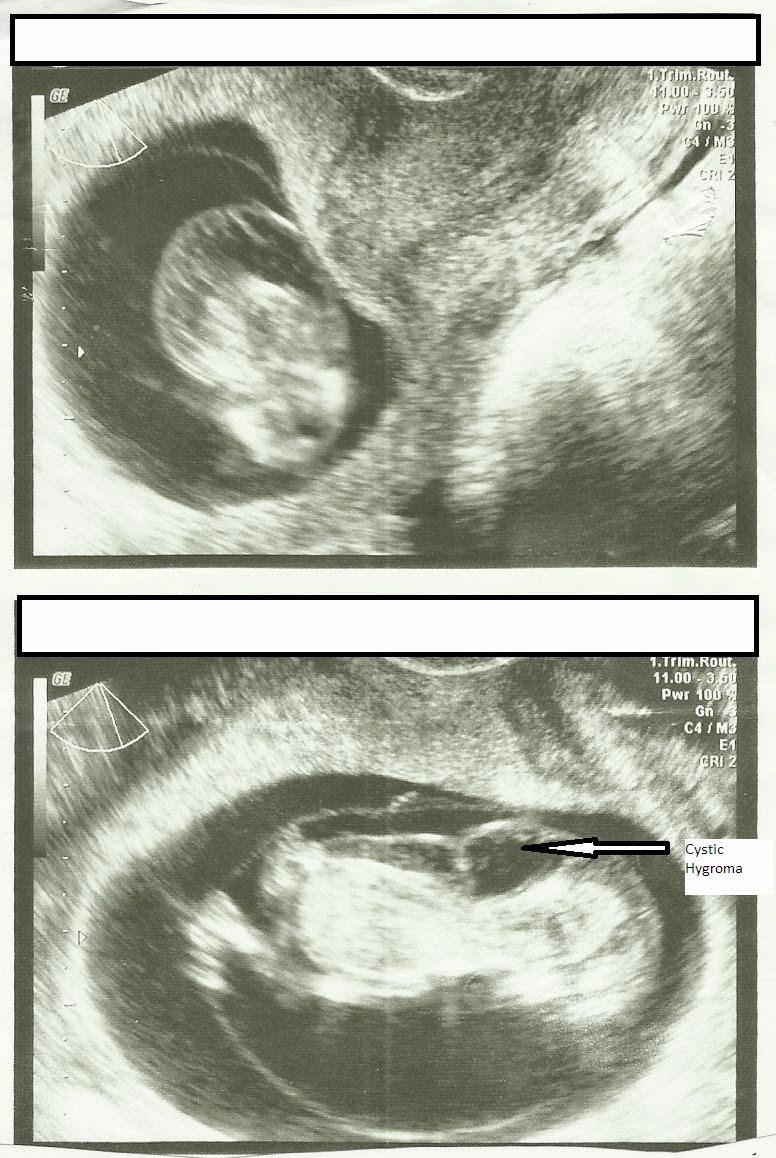 Exact etiology of OHSS is not known. However vascular endothelial growth factor (VEGF) is an important causative factor, believed to increase capillary permeability leading to accumulation of fluid in extravascular compartment. βhCG has a stimulatory effect on VEGF activity. Antagonizing VEGF action by dopamine agonist, cabergoline is effective to overcome the changes induced by gonadotropins.[3] Other vasoactive substances like cytokines (interleukins IL-2, IL-6, and IL-8), tumor necrosis factor-alpha (TNF-α), and the ovarian renin-angiotensin system are also implicated.
OHSS can be classified as early and late onset. Early onset is mainly gonadotropin related and late onset usually corresponds to presence of hCG in pregnancy. Early onset OHSS is usually associated with preclinical miscarriage leading to lower pregnancy rates. Pregnancy may increase the severity of OHSS and prolong the recovery time. Pregnancy with OHSS is associated with pregnancy complications such as preeclampsia and gestational diabetes mellitus.
Risk of OHSS can be judged by indicators of ovarian response like high levels of Anti Mullerian Hormone (AMH), antral follicular count, absolute value of estradiol or its rate of increase, increased level of inhibin, none of which were done in our case.
Mild forms can be managed on outpatient basis with analgesics and counseling about signs of progressive disease, however moderate and severe forms require admission. The primary aims of management are correction of hypovolemia, electrolyte imbalance and oliguria. Hematocrit, renal and liver function tests, electrolytes, coagulation profile, chest x-ray, abdominal ultrasound for ascites and ovarian volume should be done. Paracentesis of ascitic fluid, thoracocentesis of pleural fluid, and heparin may be necessary in case of severe OHSS.
Prevention strategies can be primary or secondary. In primary prevention, the stimulation protocol is individualized after classifying patients as poor, normal, or high responders. Primary strategies include reducing exposure to gonadotropins either by reducing the dose or using step-down protocol; or reducing duration of FSH exposure by delaying its administration till mid or late follicular phase. Other primary strategies include reducing the dose of hCG for oulation trigger and avoiding its use for luteal phase support. GnRH agonist and recombinant LH can also be used instead of gonadotropins to trigger ovulation. Use of GnRH antagonist also reduces severity of OHSS and need for use of secondary prevention strategies. Use of insulin sensitizers like Metformin is also believed to be effective.
In case of excessive response to ovarian stimulation, secondary prevention methods are used which include cancellation, delay, or modification of the stimulation protocol during that cycle. Secondary prevention strategies include delaying further gonadotropin stimulation and hCG administration until estradiol levels plateau or decrease, a technique known as coasting. Another option in IVF cycles is to allow normal progression till oocyte pickup, followed by cryopreservation of embryos which may be thawed and reimplanted later when the patient’s estradiol levels are not elevated. [4]