Inversions account for about 10% of structural chromosomal aberrations, with pericentric inversions being more common than paracentric rearrangements probably due to diagnostic difficulties in the latter group.  Pericenteric inversions and most frquently associated with  chromosome 2 . Incidence reported is around 11% . Paracenteric inversions  are frequently seen in chromosomes 7 and 3  (19% and 16%, respectively)[1]

A 27 year old Gravida 3 with 2 spontaneous abortions and  38.3 weeks of pregnancy, a known case of diabetes mellitus on lifestyle modifications for the last 1 year was referred to our hospital casualty on 1st April 2014 in view of severe pre eclampsia. There were no pre monitory symptoms. BP on admission was 180/110 mmHg, there was mild pallor, bilateral pedal edema, knee jerks were normal, chest was clear,  uterus was full term, relaxed with fetus in vertex presentation and regular fetal heart sounds.  On vaginal examination cervical os was 1.5cm dilated, poorly effaced,  vertex presentation,  station -3, membranes were present.  Urine albumin was nil. Patient was diagnosed with gestational hypertension at 31 weeks at BP of 146/90 mm Hg and was started on T. Labetalol 100mg qid which was modified to 100mg bid 4 weeks later. Serological, biochemical and hematological investigations were done. Tab Nifedipine 10 mmg 6 hourly was started. Injection Magnesium sulphate was started by Pritchard regime and induction of labour was done after all reports were found to be normal. HbA1c in the second month of pregnancy was 6.3% suggesting good control of sugars. She was evaluated in private for bad obstetric history for previous two spontaneous first trimester abortions. TORCH titres were negative for IgM antibodies. Lupus anticoagulant and anti cardiolipin antibodies both IgM and IgG were negative. Thrombophilia profile was within normal limits. A malformation scan done at 21 weeks gestation revealed an absent nose and a single umbilical artery. A quadruple marker test was done in view of single umbilical artery which revealed low risk for trisomy 21, trisomy 18 and neural tube defects.  Subsequently amniocentesis was done and amniotic fluid was sent for karyotyping and FISH tests. No aneuploidy was detected for chromosomes 13, 18, 21 and sex chromosomes on FISH. This was done on interphase nuclei. 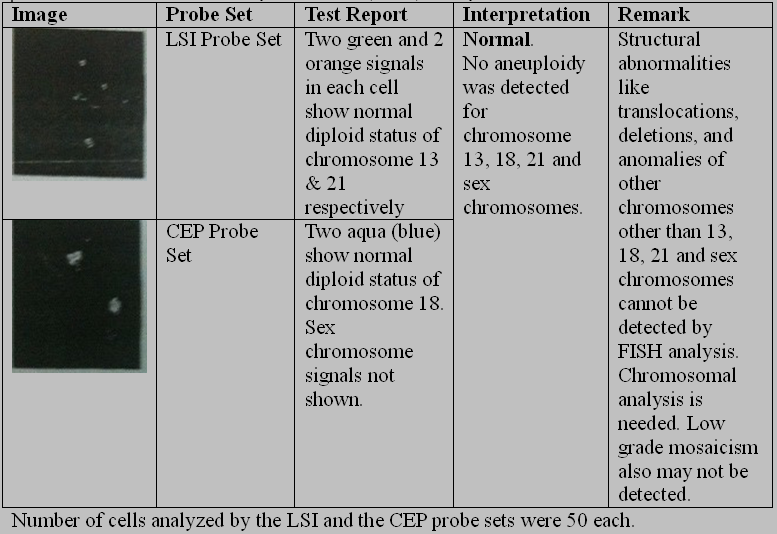 Karyotyping was done. It diagnosed paracentric inversion of chromosome 7. This was a report written on her case records. Patient did not have the mapped karyotype document with her. Parental karyotyping was done.  It revealed normal karyotype. She had uneventful antenatal course till term. She delivered a female child of 2.075 kg weight, by face to pubis vaginal delivery. It was a fresh still birth. Baby had absent nose, hypertelorism, laryngeal stenosis and single umbilical artery. 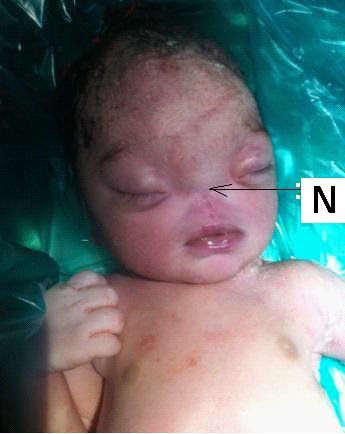 Statistics suggest that the nasal bone can be absent in normal foetuses (chromosome component normal) in 3% of the cases with an absent nose. In two thirds of fetuses with trisomy 21 the nasal bone is absent.[2] Single umbilical artery is a risk factor for structural and chromosomal  abnormalities.[3] One third of the foetuses have structural abnormalities and about 10% foetuses have chromosomal anomalies (aneuploidy) like trisomy 13, and 18. Trisomy 21 is not found to be associated with a single umbilical artery (SUA).[4]
When sonography diagnosed the absent nasal bone and SUA the patient was evaluated by a quadruple marker test to determine the risk of trisomy 21, 18 and neural tube defects. An amniocentesis was done as the quadruple test returned a low risk result for aneuploidy. A quadruple test is not recommended as per existing scientific evidence in such cases.[5] Karyotyping is recommended when a patient with single umbilical artery also shows intrauterine growth retardation, or any structural abnormality.[5] The amniotic fluid obtained by amniocentesis was sent for karyotyping and FISH. Karyotyping diagnosed a  paracentric inversion of chromosome 7. FISH was normal.
Paracentric inversion of chromosome 7 can have varied clinical presentations. Syndromes like Michelin tire , Williams-Beuren, ectrodactyly-ectodermal dysplasia-cleft syndromes have been described in literature in association with paracentric inversion of chromosome 7.  In all of these syndromes there is facial dysmorphia, developmental and behavioural disorders In "Michelin tire syndrome" there is hirsutism, smooth muscle hamartoma, facial dysmorphia, submucous cleft palate, genital and dental anomalies, seizures and moderate developmental delay. But in our case only few of these features were noted. A peculiar feature of this syndrome is that the baby and mother have apparently identical paracentric inversions of the long arm of chromosome 7.[6] However in our case parental karyotyping was normal. Normal parental karyotyping is commonly associated in cases of congenital absence of nose as these cases are usually sporadic.  Literature describes two cases with absent nose involved chromosome 9 anomalies, and in a third case there was de novo reciprocal translocation between chromosomes 3q and 12p.[7] However chromosome 7 anomalies have not been reported to be associated with congenital absence of nose.
Antenatal diagnosis of total arrhinia based on ultrasonographic findings has been described. Arhinia per se is not life threatening but the immediate and long-term outcomes of the neonate are dependent on associated anomalies. The afflicted neonate  may need emergency resuscitation due to respiratory distress. In this case there was laryngeal stenosis which was the probable cause of death. The technique and timing of the reparative procedures of the nasal structures is also a medical controversy. Parental counselling is important. A multidisciplinary team effort is required for best neonatal results.[7]