Sclerosing Stromal Tumor Of The Ovary: A Rare Entity

Sclerosing stromal tumors of ovary are rare benign tumors, which have distinctive clinical and pathologic features. They are characterized by the pseudolobular pattern of the cellular and hypocellular areas with marked vascularity and heterogeneity of the cellular area. They tend to occur more commonly during second to third decade of life and more than 80% of these tumors occur below the age group of 30 years. We present such rare case of sclerosing stromal tumor of the ovary in a 38 years old patient. The ultrasound and gross findings were suggestive of a malignant neoplasm which turned out to be sclerosing stromal tumor with a very favorable outcome.

A 38 years old woman came to the out-patient department with complaints of pain in lower abdomen for 10-12 days. The pain was cramping in nature, continuous, non-radiating and the intensity of pain reduced in lying down and left lateral position. There were no associated bowel or bladder complaints. She did not have any menstrual complaints. Her last menstrual period was one month ago. Her previous cycles were normal. She had three full term vaginal deliveries and underwent a puerperal tubal ligation 14 years ago. She did not have any significant past medical, surgical or personal history. She was given two doses of intravenous iron sucrose by a general practitioner two days back for mild anemia (hemoglobin 8.7 g/dL).
She had a pulse rate of 90 beats per minutes, blood pressure of 120/70 mm Hg. She had mild pallor. Lymph nodes were not palpable. Her cardiovascular and respiratory system did not reveal any abnormality. Her breast and thyroid were normal. The abdomen was soft on palpation and there was a mildly tender suprapubic mass of 9x5 cm, which was firm and with reduced mobility. There was no clinical evidence of free fluid in the abdomen. Per Speculum examination revealed cervical erosion and visual inspection with acetic acid was negative and Pap smear was taken. Per vaginal examination revealed a 9x5x5 cm cystic and solid mass with lobular surface in the right and anterior fornix. It was tender and was felt separately from the uterus. Mobility was reduced and left fornix appeared free.
She was admitted with a suspicion of tubo-ovarian mass undergoing torsion. Her repeat hemoglobin was 8.6 g/dL and CA-125 value was 53.7 U/ml. Her ultrasound revealed a heterogeneous predominantly hypoechoic lobulated mass measuring 10.1x10.0x 6.7 cm which is pushing the uterus caudally. It showed increased perfusion with resistance index of 0.34 (tumoral vascularity). Few areas of necrosis were noted within it. Left ovary was not seen separately from the mass. The right ovary was normal. There was minimal free fluid in the pelvis and Morrison’s pouch. There was no other abnormality in the abdomen. In the settings of raised CA 125 a suspicion of malignancy was kept in mind.
She received one unit of packed cell volume and underwent a staging laparotomy with total abdominal hysterectomy with bilateral salpingo-oophorectomy.
Intraoperative a large lobulated mass of 10 x 10 x 8 cm arising from the left ovary with single twist torsion of the pedicle was seen. 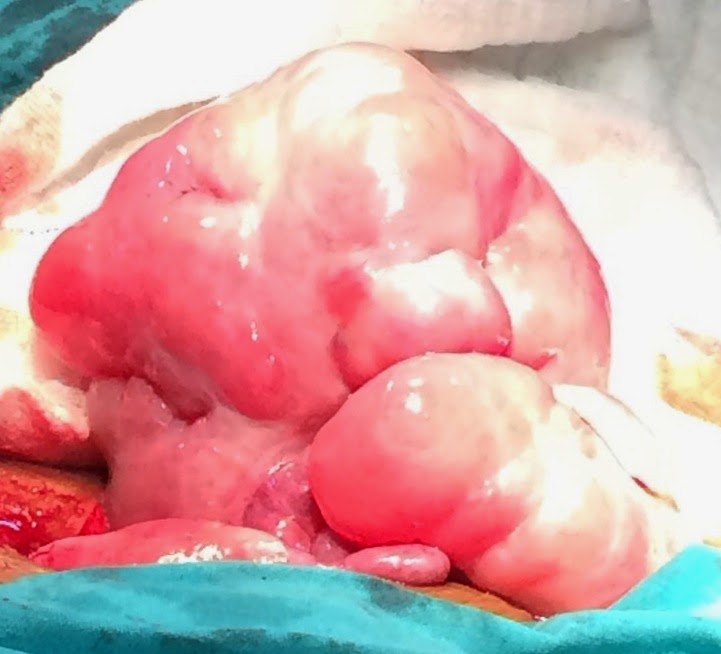 There were cystic and solid areas with edematous ovarian tissue. There were no para-aortic lymph node enlargement and her liver and other organs did not reveal any palpable tumor. The peritoneal fluid was negative for malignant cells.
The cut section of the tumor was yellowish, homogenous, and lobulated and showed a glistening, translucent surface. Histopathological examination showed a benign stromal tumor composed of many lobules of polygonal to spindle cells with uniform round to oval nuclei and eosinophilic cytoplasm (figure 2). 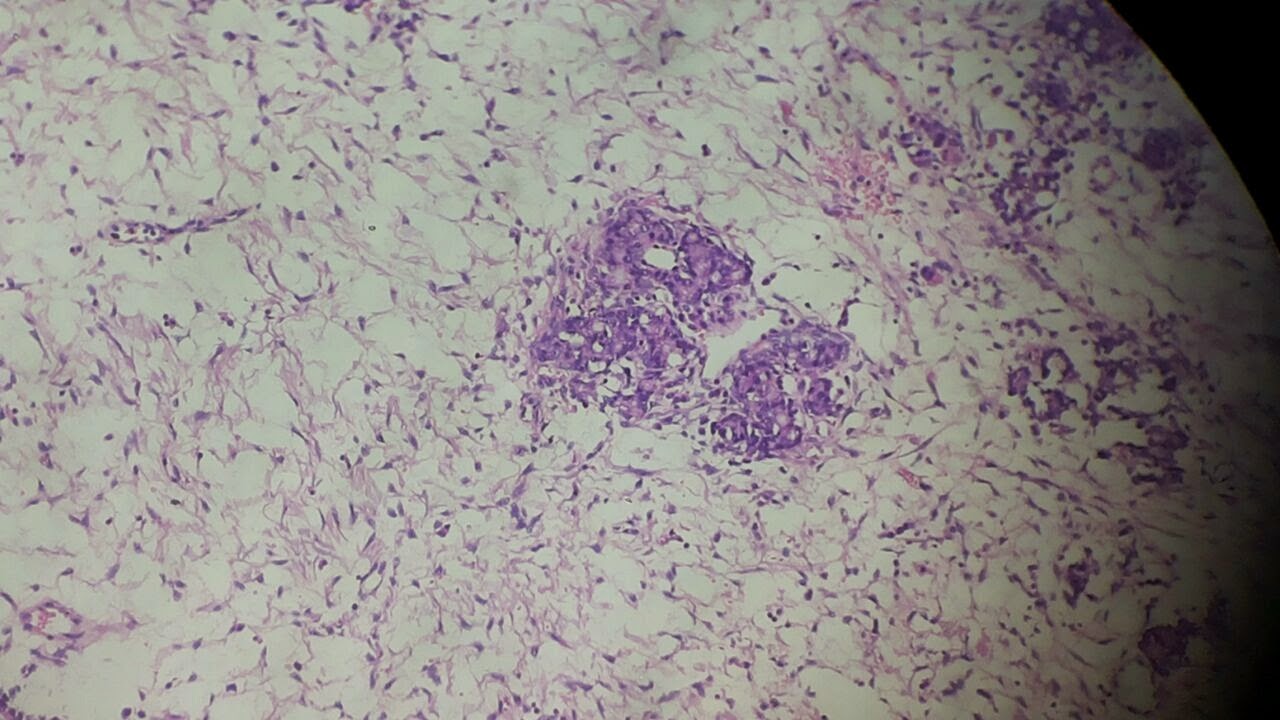 Figure 2. Histopathological appearance of the tumor.

The islands of tumor cells were scattered in an edematous ovarian stroma with many dilated lymphatic and vascular channels within it. The superficial ovarian cortex was relatively spared. The findings were suggestive of sclerosing stromal tumor of ovary with massive edema due to torsion.
She received one unit of packed cells post operatively and had an uneventful recovery. She was discharged after suture removal on day 8 of surgery. She did not have any symptoms on follow up after one month of the surgery.

SST is a benign subtype of ovarian stromal tumor, described as a distinct entity in 1973 by Chalvardjian and Scully. Sex cord stromal tumors have an approximate occurrence in 8% of ovarian neoplasms and SST compromises less than 5% of these.[1] It differs from fibromas, thecomas, and lipid cell tumors in clinical presentation and histopathological features. SST usually occurs in the second and third decades of life, younger than the mean age of patients with other types of stromal cell tumors. The symptoms associated with these tumors are altered menstrual patterns and lower abdominal pain. They may have some functional activity and very rarely may have associated ascites.[2, 4, 5]
Histopatholgical examination of these tumors reveals a pseudolobular pattern in the cellular and hypo cellular areas. There is a prominent vasculature with hemangiopericytomatous pattern. There are areas of cellular heterogeneity in the luteinized theca like cells and there are many spindle shaped, fibroblast like cells seen.[6, 7]
The term ‘sclerosing stromal tumor’ was attributed because the cellular areas of this tumor revealed collagenous sclerosis. Immunohistochemistry plays an important role in distinguishing these tumors from massive ovarian edema and Krukenberg’s tumor. [3]
The luteinized theca like cells may secrete vascular permeability factor and vascular endothelial growth factor causing vasodilatation leading to hypervascularity, hyperpermeability and edema.[7] This zonal edema is a distinctive feature of SST. The edematous stroma of these tumors may show some vacuolated and signet ring cells which can be confused with signets cells of Krukenberg tumor of ovary.[8] Blood markers like calcitonin, inhibin, CD34, and α –glutathione S-transferase positivity have been found to be useful to differentiate SST from thecomas, fibromas and other sex cord stromal tumors.[9]
The etiology of SST remains largely unknown. By virtue of their structural morphology they are proposed to arise from the immature pluripotent stromal cells of the ovary.[10] An alternative origin from the muscle specific actin positive elements of the theca cells called as perifollicular myoid stromal cells has also been reported.[7]
The reported case was a rare occurrence of SST in fourth decade with symptoms and signs suggestive of torsion, and a malignant neoplasm which turned out to be benign on histopathology. The massive edema seen in the ovary of this patient can be because of the torsion and the vascular hyperpermeability induced by VPF & VEGF.
In conclusion SST should be considered in women when clinical findings suggest a solid and cystic adnexal mass with multiple lobulations, with an ultrasound showing low PI and RI values and no ascites. The ultrasound features of SST may mimic those of malignant ovarian tumors, and hence color Doppler ultrasound is advisable to reveal the prominent peripheral vascularity. [11]