Vulval leiomyomas are rare in occurrence with as few as 300 cases reported in the literature. Smooth muscle tumors may arise from the erector pili muscle, the erectile tissue or at the insertions of the round ligaments and are usually well- circumscribed. Purely epithelioid lesions are identified only in the vulva and their hyalinisation is more common. We present a case of a 46 year old woman with bilateral multiple vulval masses with symptoms of discomfort while sitting and walking. Clinically it was diagnosed as a labial lipoma due to its soft consistency and surgical excision was done. Histopathology report was suggestive of leiomyoma with hyaline changes on microscopic examination.

Extrauterine leiomyomas commonly affect the urinary bladder, labia majora, labia minora, ovaries and urethra; labia majora being the most common. Presence of concurrent uterine leiomyomas or a history of hysterectomy done for the same may be suggestive of the diagnosis.[1] Among those affected by these tumors, the mean age at presentation varies from 13 to 71 years. The average tumor size varies from 0.5 to 15 cm. With regard to pathologic origin, the tumors are thought to arise from the smooth muscle cells within erectile tissue or blood vessel walls or the remnants of the round ligament. These may also originate from the dartos muscle of the genitalia.[2] Vulval leiomyomas may be clinically misdiagnosed as Bartholin’s cysts, lipomas or fibromas.[3] Although considered benign tumors, they can be locally aggressive and can also metastasize. Most tumors are solitary and well circumscribed masses. Symptoms include pain and difficulty in walking, discomfort while sitting or difficulty in micturition. Owing to the size and appearance of the tumor, the patient may suffer from stress, anxiety and cosmetic issues. Treatment options include surgical excision and removal of the entire tumor, when symptomatic. Follow-up care with regular screening and examination are very important as the chances of recurrence are not uncommon. Excision of the labial masses was performed in our patient admitted with complaints of increase in the size of the swelling causing her discomfort while walking. The patient was discharged on day 7 and followed up after 2 weeks and 6 weeks.

A 46 year old, married since 26 years, Para 3 was admitted with the complaints of multiple vulval masses since 1 year which gradually increased, largest mass being 5x4 cm  and smallest being 3x2 cm, causing discomfort while sitting and walking with occasional bleeding from the mass. There was no history of fever, vaginal discharge and bladder or bowel disturbances. The patient gave history of undergoing total abdominal hysterectomy 5 years ago for fibroid uterus with abnormal uterine bleeding. On general examination, vital parameters of the patient were normal. On local examination, multiple masses (grossly four masses) were present on both sides (two on either side) of the labia majora and smaller masses on the lateral walls of vagina near labia majora, the smallest being 3x2 cm and largest 5x5 cm. Clinically, the masses appeared to be lipomas or degenerated fibromyomas due to its soft consistency. All the routine investigations were normal. Ultrasonography of the pelvis was done which indicated hyperechoic lesions in the labia majora and essentially a normal pelvic study. On clinical examination, the innermost extent of one of the vulval mass on the left side could not be appreciated. Hence, a multiplanar-multiecho magnetic resonance imaging (MRI) with post-contrast imaging was done which was suggestive of a fairly large space occupying lesion involving the lower pelvis and perineal region measuring 10x7x5 cm in the vagina extending into the peri-urethral region and distinct from the rectum. The fat planes from the rectum were well-preserved. Antero-inferiorly, it was seen extending up to the vulva and superiorly till the vault. The patient was planned for excision of the vulval mass with an abdomino-perineal approach with surgical stand by. Procedure was done under spinal and epidural anesthesia. A 3 cm incision was made at the muco-cutaneous junction and a firm to cystic encapsulated mass was enucleated after dissection along its capsular plane. The size of the cavity formed after removal of the mass was reduced with interrupted sutures followed by closure of the overlying skin. Similar procedure was done for the other vulval masses. There was no extension of the vulval masses till the vault and into the pelvis. The vulval mass on the upper left side, clinically and on MRI thought to be extending into the pelvis was also enucleated completely through the vaginal approach. On cut section of the largest mass a whorl-like appearance with central degenerative changes were noted and our intra-operative diagnosis was that of a vulval leiomyoma. She had an uneventful postoperative recovery and was discharged on the seventh postoperative day. At 6 weeks follow up she was completely asymptomatic.
Histopathology report showed tissue bits greyish white in color with whorled pattern in gross appearance that was confirmed on microscopic examination that revealed features of leiomyoma with hyaline changes with no evidence of malignancy. 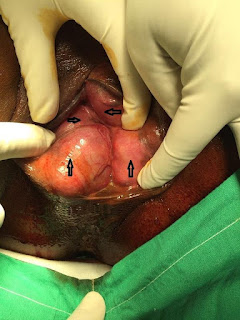 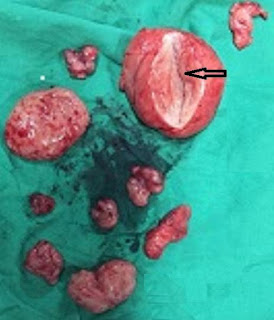 Figure 2. Vulval leiomyomas after removal. One leiomyoma is bisected (arrow) to show its archtecture.

Leiomyomas are an important health concern as they are the most frequent indication for the performance of hysterectomy, accounting for nearly 2,40,000 such procedures in the United States.[4] About 40% of the patients with fibroids have chromosomal abnormalities that include deletions of chromosome 7 and trisomy of chromosome 12. The genes known to play an important role in their occurrence are CLAD1 and PLAG1 gene.[5] Vaginal leiomyomas were first described by Denys de Leyden in 1733.[6] Vulval leiomyomas are most commonly seen in the anterior vaginal wall. The size of the tumor may vary from 2 to 10 cm, the most common site being the labia majora. Myxoid changes and hyalinization are common over labia majora. Majority of the patients are asymptomatic though some may present with vaginal bleeding, dyspareunia, discomfort while sitting and urinary disturbances. Most tumors occur as solitary, well circumscribed and slow-growing masses.[7] Diagnosis may involve complete clinical examination with thorough evaluation of medical history. Ultrasound and MRI are most commonly used for diagnosis though histopathology of the surgical specimen is the gold standard for diagnosis. Treatment of choice would be surgical excision of the tumor with urethral catheterisation (to avoid damaging the urethra) if limited to the vulva. In cases of large tumors, abdomino-perineal approach is preferred. The patient needs to be explained about the chances for recurrence and hence the need for regular follow up.[8]

Vulvar leiomyomas are rare, seen more commonly in middle aged women. Concurrent uterine leiomyomas or a past history of abdominal hysterectomy for the same helps in its diagnosis. These tumors rarely metastasize but chances of their recurrence are known. Clinical examination, USG and MRI help in the diagnosis. However, histopathology of the surgical specimen is the gold standard. Surgical excision of the tumors is the treatment of choice.