Congenital Granular Cell Tumor (GCT), commonly called congenital epulis or Neumann’s tumor is a rare benign tumor of the maxillary or mandibular gingival margin. It may be detected antenatally or can present at birth. If large in size, it can lead to respiratory obstruction or difficulty in swallowing. Surgical excision is needed in most cases with favorable outcome. We present a case of antenatally diagnosed congenital epulis which was surgically excised with no complication at 4 month follow up of baby.

Epulis is a growth on alveolar mucosa. Congenital epulis also known as granular cell tumor was first described by Neumann in 1871. Although it is a very rare tumor it is common in Caucasians, with female preponderance (about 8-10 times more than male infants).[1,2] Diagnosis may be antenatal, as in our case, or postnatal.

A 26 year old lady, married since 3 years, non consanguineous marriage, a 3rd gravida with previous two miscarriages, with 1.5 months amenorrhea was booked in our hospital at 6 weeks gestation. On obstetric history, she had two previous spontaneous incomplete abortions at 4 months and 3 months respectively, each followed by check curettage. Her blood investigations, dating scan and scan at 12 weeks 5 days for nuchal translucency and nasal bone were normal. Her anomaly scan done at 18 weeks 1 day was normal, with cervical length of 3.5 cm.
At 30 weeks of gestation on her routine growth scan, patient was diagnosed to have a single live intrauterine fetus with gestational age 30 weeks 3 days, with adequate liquor of 18 cm, with a 2 x 1.6 x 1.1 cm echo- poor mass, seen protruding from the region of fetal oral cavity, in the midline. The mass was probably seen arising from mandible or epignathus. She underwent 3D scan, in which a 2 cm x 2 cm well defined hypoechoic lesion was seen protruding from fetal mouth, arising from mandibular alveolus with normal fetal tongue and maxilla, as seen in figures 1 and 2. 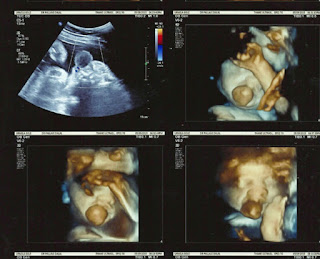 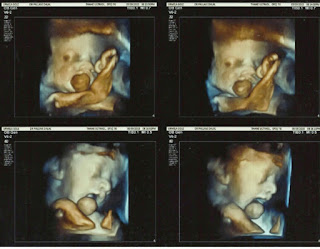 Antenatally, pediatric surgery reference was taken; they opined that the mode of delivery would not affect the postnatal outcome, and that the mass would be surgically excised after delivery. Glucose tolerance test was repeated and values were, fasting: 76 mg/dl, 1 hour: 92 mg/dl, 2 hour: 84 mg/dl. Patient was called for weekly follow up for fetal well being and growth monitoring. At 38 weeks gestation, patient came with spontaneous labor pains and delivered uneventfully a female child of 2.8 kg with an Apgar score at of 8/10 at 1 minute. Baby was admitted in NICU for evaluation of the mandibular mass and was given Ryle's tube (RT) feeds as the mass was obstructing normal swallowing. There was no respiratory obstruction. 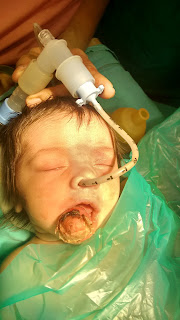 On day 2 of life, ENT evaluation and USG was done. USG was suggestive of a pedunculated hypoechoic lesion 2 x 1.2 cm originating from lower alveolar mucosa, containing both arterial and venous component, suspected to be neoplastic.
On day 10, injection triamcinolone 0.1 mg per kg and injection dexamethasone 0.4 mg per kg was given for sclerosing the vascular component. Bleomycin was not given as the mass was flush to mandible and could cause mandibular necrosis and later pulmonary fibrosis in the baby. After 2 weeks, the tumor shrunk to 50% of its size and on day 24 of life, laser- assisted excision of the tumor was done. Wound was left open for mucosal healing. After 1 week the wound healed completely. Trial with breast feeding was attempted on day 32 of life (before that only RT feeds were given). Baby successfully established suckling and swallowing. Baby was discharged on 10th post operative day. Histopathology revealed congenital epulis (granular cell tumor) with clear margins. 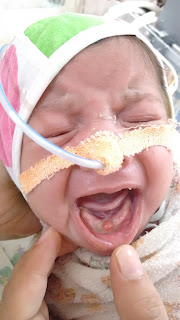 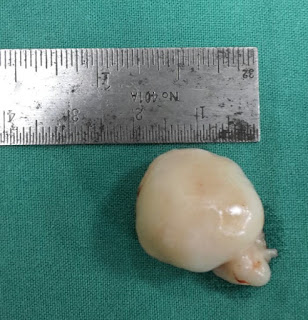 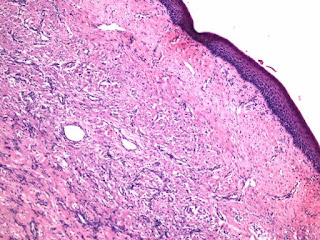 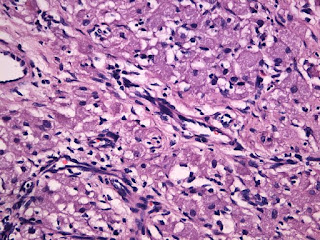 In cases of epulis, the upper gingival margin, that is maxilla is three times more affected than mandible. On gross external examination, it is seen as a pink coloured growth on alveolar margin with smooth surface; often it is pedunculated. It generally affects canine or incisor area.
On histopathological examination, it originates from the epithelial cells of dental lamina (odontogenic origin). Sometimes epulis originates from fibroblasts, pericytes, myocytes, smooth muscle cells, histiocytes and neural crest cells. In a recent study by Aparna et al on immuno-profiling of the epulis, cells of mesenchymal origin with myofibroblastic features were identified. They were contractile fibres and produced collagen, and eventually underwent auto-phagocytosis.[3]
In immunohistochemical study on the histogenesis performed by Leocata, markers for lysozyme, macrophage marker CD68, and HLA-DR were present. Epithelial markers and S-100 protein, which are specific for Schwann cells were absent.[4] Although there is female preponderance, the tumor does not have estrogen receptors and is hormone independent.[1][5] Malignant transformation in the mass is also not found. [6][7]
Diagnosis can be done antenatally by ultrasonography.[8] In intrauterine life, a big mass in oral cavity can hamper fetal swallowing and result in polyhydramnios.[9,10] The tumor is rarely detected before third trimester.[11] Antenatally other oral lesions as dermoids, lymphatic malformations, osteogenic or chondrogenic sarcomas, rhabdomyosarcoma can have similar ultrasound features and should be ruled out postnatally.[12]
If the lesion is huge and can potentially obstruct neonatal airway during a vaginal delivery, due to mechanical obstruction or by traumatic disruption of tumor, elective lower segment cesarean section with ex- utero intrapartum treatment (EXIT) can be attempted.[13] EXIT includes elective intubation and mechanical ventilation of the neonate before placental separation and clamping of the cord, so that hypoxia can be avoided.[14]
Postnatally, surgical excision is the preferred form of treatment for large granular cell tumors as they interfere with breathing, suckling and swallowing.[15] Smaller lesions can be monitored for spontaneous regression.[16,17] If an alveolar defect is created during surgical excision, normal dental development can be affected. In such cases, subperiosteal undermining with gingivoperiosteal flap suturing should be done. Carbon dioxide laser excision is another good option which was done in our institute. [18]

Congenital epulis can be diagnosed in an antenatal ultrasound mostly in third trimester. A multidisciplinary approach and an institutional delivery with good NICU care is advocated. Confirmation of the diagnosis can be done only after histopathological examination. Postnatal USG and MRI can guide the extent of penetration. Small tumors can be monitored as they may regress in size but larger ones need surgical excision as they can cause mechanical obstruction to respiratory and oral tract. Even on long term follow up, recurrence or malignant transformation of the tumor mass is not seen.