Cesarean section scars may cause difficulties during future pregnancies and any surgery the patient has to undergo. We present a case report of an unusual problem during a first trimester medical termination of pregnancy (MTP) due to previous cesarean section scars.

Some of the commonly known and faced long term complications due to lower segment cesarean section (LSCS) are uterine scar dehiscence or rupture and intra-abdominal adhesions.[1,2] Other problems like scar endometriosis, adherent placenta, and scar ectopic pregnancy may also be seen.[1,2] In our case, previous caesarean section scar had formed an incomplete ring like constriction around the isthmus of the uterus, which posed difficulty during cervical dilatation and curettage.

A 35 year old gravida 3, para 2, living 2 patient with previous 2 LSCS came to us with 7 weeks intrauterine gestation for medical termination of pregnancy. She gave a history of receiving 15-S-15-methyl PGF2alpha intramuscularly followed by an attempt at dilatation and curettage in a private hospital, which had to be abandoned as the cervix could not be dilated. Then tablet misoprost 800 µg was kept per rectally but that also failed to cause any bleeding or cervical dilatation. Hence she was referred to our hospital.

Her medical and surgical history was not contributory. Her last cesarean section had been performed 2.5 years ago. Her general and systemic examination revealed no abnormality. Abdominal examination showed a Pfannenstiel scar and other normal findings. On per vaginal examination the uterus was 7-8 weeks' size, acutely retroflexed and retroverted (cochleate). The fornices were nontender, without any mass. The results of her investigations for fitness for anesthesia were normal. Due to the risk of uterine rupture, we decided not to use pre-procedure misoprostol for cervical dilatation in this patient. She was put in lithotomy position under general anesthesia. the cervix was held with vulsellum to give outward and upward traction to straighten the axis of uterus, uterine sounding was done and dilatation of cervix with Hegar’s dilators was done. Dilatation posed difficulty as we had to negotiate the dilators first in horizontal and then upward and backward direction. There was resistance at two levels – the first at the level of the internal os, and the other about 1 cm above it. Cervical dilatation to 8 mm could be achieved with difficulty. Suction evacuation was performed and check curettage was done. During check curettage, a ring like ridge was felt above the level of the cervix anteriorly (in the area where an LSCS scar would be expected to be present) and laterally. It was thought to be due to previous two caesarean sections that the patient had undergone. The patient made an uneventful recovery after the procedure. After 2 days of procedure we performed ultrasonography on the patient to check for the ring like constriction that was felt during surgery and it was found to be LSCS scar. 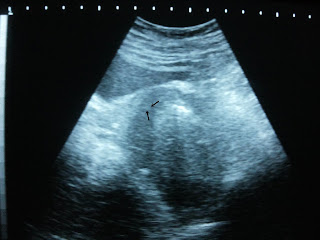