Adnexal masses in pregnancy pose a challenging clinical scenario.  Hyperreactio luteinalis and ovarian hyperstimulation syndrome are two such conditions, which cause bilateral ovarian masses. These two entities have been described in literature as conditions in continuum. The diagnostic dilemma between the seemingly similar entities and an attempt to distinguish the two is reported here.

Ovarian hyperstimulation syndrome (OHSS) is a condition that is characterized by massive enlargement of ovaries, features of fluid shift and varying effects on the end organ systems. In the mild form, the patient presents with discomfort, pain, nausea, abdominal distension, enlarged ovaries and normal hematological and biochemical profiles.   In its severe form, this can include hydrothorax, marked ascites, liver dysfunction, renal shut down or venous thromboembolism.[1]

A 25 year old lady with married life of 2 years, primigravida with a gestational age of 13 weeks and 3 days confirmed by early sonography was admitted with complaints of multiple episodes of vomiting.  She had complaints of abdominal pain, but no complaints of vaginal spotting or bleeding. Patient had been admitted to a different hospital prior where she did not respond to symptomatic management. Apart from irregular menstrual cycles, for which no specific treatment was taken; she did not report any major medical or surgical illnesses in the past. She denied any history of receiving medications for purpose of conception or regularization of menses in the past 6 months. A review of pre-pregnancy investigations showed a scan dated 14 months prior to admission, showing polycystic ovaries with ovarian volumes of 23 cc and 14 cc and also a left para-ovarian cyst measuring 2.5x2.1 cm. However, patient did not give history of any weight gain, irregular menstrual cycles or facial hair.
Examination showed signs of dehydration, pulse of 120 beats per minute, normal blood pressure, unremarkable cardiovascular and respiratory system examination. Abdominal examination showed a uterus of 14-16 weeks size and closed internal cervical os. Bilateral forniceal fullness was present.
Ultrasonography confirmed a single live intrauterine gestation of corresponding gestational age and showed bilateral simple ovarian cysts in both ovaries—the ovaries measured 10.5x6.2x5.8 cm and 7x6.2x5.1 cm. The bilateral cysts showed normal vascularity.
Patient was admitted to the ward and was treated with intravenous fluids, anti-emetics and multi-vitamin infusion. Urine output was monitored and was adequate. Vomiting gradually reduced in frequency and severity.  Investigations showed normal hemoglobin, WBC and platelet count. Liver function tests showed normal levels of protein and albumin. Slightly elevated AST with value of 56 IU/ml normalized in few days. Renal function tests showed elevated blood urea of 44 mg%, elevated creatinine of 2.1 mg%, serum sodium of 126 meq/l and serum potassium levels of around 2.5 meq/l. There was no decrease in urine output, which was maintained strictly.   Daily monitoring of renal function tests showed improvement in blood urea and creatinine and returned to normalcy within 4 days of admission. Electrolyte abnormality persisted for duration of almost 10 days despite treatment with intravenous potassium in normal saline.
β HCG value was 450667 mIU/ml which reduced to 395012 mIU/ml. The upper value of reference range at 13 weeks of gestation being 254,000 mIU/ml. Coagulation profile was normal. Serum TSH was 0.03 IU/ml but Free T3 (normal range 1.4-4.4 pg/ml)  and Free T4 ( normal range 0.84-2.00 ng/dl) were normal and hence no treatment was started. The serum TSH repeated 3 months later showed normal value of 2.15 IU/ml. Ultrasonography was repeated 10 days after admission and showed single live intrauterine gestational age with corresponding gestational age and persistence of multiple large simple cysts with a left ovarian volume of 109 cc and right ovarian volume of 40 cc.
Upon symptomatic improvement and reduction of vomiting, patient was discharged after 23 days of indoor hospital stay; and advised regular outpatient antenatal visits. Ultrasonography done around 3 months and 5 months (at 34 weeks) after the admission also showed persistence of the simple cysts in the ovary.
At full term gestation, patient went into spontaneous active labor. LSCS was performed in view of non-progress of labor and a female child of 3.39 kg was delivered uneventfully. Adnexae were inspected and showed bilateral mildly enlarged ovaries with a paraovarian cyst of 1x1 cm on the left side (figure 1). No intervention was done for the cyst. Patient had an uneventful postoperative course. The patient did not have any signs of virilization and the female child was also normal.
Post-delivery, venous blood sample of the patient was collected and sent for FSH receptor analysis. This did not reveal any mutation. 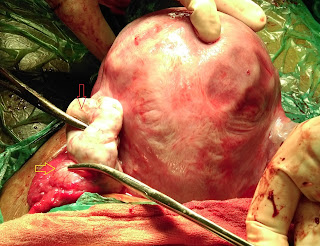 OHSS is predominantly described as an iatrogenic event in the context of controlled ovarian hyperstimulation for management of infertility. Being a possibly life-threatening complication, many classifications have been proposed and many strategies have been developed to reduce the incidence and complications of OHSS.  However, recently it has been recognized that OHSS can occur even without the use of ovulation induction or gonadotropic agents.  This entity is now termed as “spontaneous OHSS” (sOHSS).[2]
A clinico-radiological algorithm has also been described recently which differentiates the four etiological types of sOHSS (Type I-- FSH receptor mutation; Type II – elevated β HCG due to twins/ molar pregnancy; Type III—hypothyroidism; Type IV- FSH/LH secreting adenomas).[3]
Our patient had abdominal pain, vomiting, tachycardia, elevated creatinine, hyponatremia, hypokalemia, multiple bilateral ovarian cysts, elevated β HCG and mildly elevated liver enzymes. The absence of history of ovulation induction allows a diagnosis of sOHSS, and clinical criteria match that of mild OHSS. All of these clinical parameters improved with conservative management including intravenous hydration and directed symptomatic management, which is in line with the guidelines available.[1]
A close differential diagnosis of such a clinical condition is hyperreactio luteinalis (HL). The condition is characterized by multiple cysts in the ovary (theca lutein cysts), transient hyperthyroidism, elevated β HCG, ascites and virilization of the mother and fetus, if female. In the past aggressive management including exploratory laparotomy with cystectomy or ovarian removal were in vogue due to possibility of coexisting malignant pathology.  However, significant long term sequelae on the mother or the fetus have not been described. A recent review also suggests that conservative management is most preferred, for the condition.[4]
Multiple reports have appeared in the past, which have suggested the similarity of the two conditions, but the need to distinguish the two. Foulk et al had reported a case which details about the need to differentiate the two conditions. The distinction was made on the fact that there were no features of virilization and conservative management was followed.  No other specific effort was made to distinctly characterize the conditions.[5] Coccia et al have described hyperreactio luteinalis occurring in a woman with preexisting renal failure, hyperthyroidism and with twin pregnancy, but the distinction was not clearly made.[6] Gherman et al reported a case of intractable hyperemesis and transient hyperthyroidism ultimately resulting in a small for gestation age fetus. Interestingly our patient also had severe hyperemesis and transient hyperthyroidism initially, but IUGR was not present.[7] In their two-case comparison between sOHSS and hyperreactio luteinalis, Suzuki et al opined that the distinction between the conditions is difficult.[8] Haimov-Kochman in 2004 suggested that sOHSS and HL are entities in a continuum.[9]
Clearly, our case represents the diagnostic dilemma between spontaneous OHSS and Hyperreactio luteinalis. Since the patient does fit into sOHSS, it was reviewed if the patient fits into any of the types of sOHSS etiologically (as mentioned above)[3]. It was a singleton pregnancy and there were no features of gestational trophoblastic disease, so type II is not considered. Our patient had transient hyperthyroidism and a later euthyroid state for the duration of pregnancy, and hence is not type III. Since the patient did not have any neurological or ophthalmological manifestations, it is unlikely to be type IV.
Hence, a possibility that remained to be ruled out was Type I sOHSS, which is FSH receptor mutation. A recent case report has described a novel FSH receptor mutation occurring in a patient with severe sOHSS with successful pregnancy outcome.[10] Hence the possibility of FSH receptor mutation was considered in our patient and analysis done for the purpose. However, no mutation was found.
This case is being reported because a specific attempt was made to distinguish the two seemingly similar entities by testing for FSH receptor mutations. As mentioned in the literature reviewed above, and is presented in our case; hyperreactio luteinalis and sOHSS are entities which have a continuum and continue to be difficult to distinguish.