Anterior abdominal wall is a rare site for the development of a leiomyoma. It may develop there primarily, or may be the result of implantation during myomectomy. A case of rectus sheath leiomyoma which had been wrongly diagnosed as an ovarian tumor is presented.

A leiomyomas is a smooth muscle cell tumor. The uterus is a common site of development of a leiomyoma in a woman.[1] Extrauterine leiomyomas are known to develop in the round ligament, uteroovarian ligament, vagina, and broad ligament. A pedunculated subserosal leiomyoma may get adherent to bowel or omentum, and become a wandering leiomyoma when its pedicle undergoes ischemic necrosis and it derives its blood supply from the structure to which it adherent. Leiomyomas may also develop in the bowel wall. Muscular tumors arising from the abdominal wall tend to be rhabdomyomas, arising from the skeletal muscle. Development of a leiomyoma in the anterior abdominal wall is difficult to explain. A case of rectus sheath leiomyoma which had been wrongly diagnosed as an ovarian tumor is presented.

A 28 year old nulliparous woman, married for two years, presented with a complaint of a lump in abdomen for one month. Her menstrual history was normal. There was no history of abdominal pain, pressure effects on bowel, bladder or rectum. Her medical and surgical history was not contributory. Her general and systemic examination revealed no abnormality. Abdominal examination showed a rounded lump measuring 10 cm in diameter on the left side of the midline, below the level of the umbilicus. Its mobility was restricted. A straight leg raising test showed the mass to be intraabdominal. On bimanual pelvic examination there was a 10 cm diameter mass with a smooth surface above and to the left of the uterus. Its lower limit could be reached. Its mobility was restricted. Ultrasonography done prior to presenting to us showed it to be a solid left ovarian tumor. Her CA 125 level was 14 U/mL. Her investigations for fitness for anesthesia showed no abnormality. An exploratory laparotomy was done through an infraumbilical midline vertical incision. It showed a 10 cm diameter mass in the left rectus sheath, attached to the left rectus abdominis muscle and the rectus sheath by loose connective tissue. It was dissected easily and removed completely. Its feeding vessel was on its posterior aspect, branching from the inferior epigastric artery. It was clamped, cut and ligated. The anterior parietal peritoneum was not invaded by the mass. All intraperitoneal structures including the uterus were normal. An extraperitoneal drain was placed in the cavity left behind by the removal of the mass. The abdominal was closed in layers. The patient made an uneventful recovery. Histopathological examination showed it to be a leiomyoma. 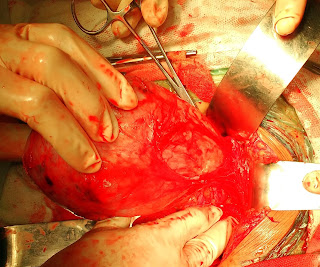 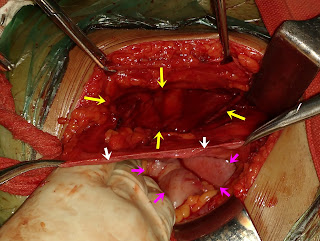 A leiomyomas is a common benign uterine tumor seen in women in the reproductive age group. Extrauterine leiomyomas are uncommon. Most of the extrauterine tumors are located close to the uterus, as in the round ligament, uteoovarian ligament, broad ligament, and vagina.[2,3,4,5,6] A subserous pedunculated leiomyoma may become a wandering leiomyoma when it gets attached to the bowel or omentum and its pedicle undergoes necrosis. Abdominal wall is composed of skeletal muscle, and connective tissue – loose or in aponeurotic form. Muscular tumor of the abdominal wall is expected to be a rhabdomyoma rather than a leiomyoma. Still leiomyomas have been reported in the anterior abdominal wall layers.[7,8,9,10,11,12,13] Though some of them may be due to implantation during open or laparoscopic myomectomies,[4,14.] most of them develop there primarily. These are believed to develop from smooth muscle cells in the walls of blood vessels in the abdominal wall.[15] A leiomyoma incarcerated in an anterior abdominal wall hernia differs from those described before in that it has an abdominal wall defect associated with it and it often has its connection with the uterus.[16] They tend to be asymptomatic, since they cannot cause usual symptoms of a uterine leiomyoma – abnormal bleeding, pain and pressure effects. Usually attention is drawn to them when they become large, or during an examination for some unrelated symptom. Their location in the abdominal wall can be diagnosed clinically by examining the woman in lying down position and then with her raising her extended lower limbs. An abdominal wall tumor becomes more prominent during leg-raising, while an intraabdominal tumor becomes obscured. The diagnosis can be confirmed by imaging techniques, like ultrasonography, and computed tomography. The excision of the mass is usually easy and complete, leaving little residual effect behind, if any. Abdominal wall leiomyoma needs to be differentiated from a fibroma, lipoma, amd a sarcoma. A biopsy may be obtained when a malignancy is suspected.

In the case presented, the straight leg raising test was false negative. Unfortunately the diagnosis was missed on ultrasonography too, and a wrong diagnosis of an ovarian tumor was made. Had a correct diagnosis been preoperatively, a laparotomy could have been avoided, and the tumor could have been excised by opening the abdominal wall only up to the cavity of the left rectus abdominis.

A leiomyoma, although commonly seen in uterus or gastrointestinal tract, can develop de novo in areas devoid of myomatous tissues or obvious smooth muscle cells. Whether smooth muscle cells in vessels of anterior abdominal wall react to extraneous hormonal stimulation to form a de novo leiomyoma is yet to be established. This condition has to be kept in mind while completing the list of differential diagnosis of anterior abdominal wall tumors.