Fraser syndrome is an autosomal recessive syndrome with multiple malformations. Cryptopthalmos, syndactyly (cutaneous), genito-urinary and laryngeal malformations are the major manifestations. Herewith presenting a case of antenatally diagnosed Fraser syndrome. The infants which are not severely affected can survive upto early childhood but majority die in utero or in early neonatal period.

Fraser syndrome was named as such by George Fraser in 1962 in 2 sisters affected by it at birth. It is a rare syndrome with an incidence of 0.043 per 10,000 live births and 1.1 in 10,000 still births.[1] It is an autosomal recessive syndrome characterized by variable phenotypic expression. It is caused due to mutation in the FRAS1 gene (607830) on chromosome 4q21, the FREM2 gene (608945) on chromosome 13q13 or the GRIP1 gene (604597) on chromosome 12q14.[2] It has a recurrence risk of 25% among siblings; therefore prenatal diagnosis is an important task for counseling of the affected families.[3] Prenatal diagnosis has been reported in less than 20 cases antenatally, to the best of our knowledge.[1,4]

A 27 year old gravida 2 abortion 1 was referred to our institute in view of abnormal ultrasound findings at 19 weeks of gestation. She was in a consanguineous marriage (married to her cousin brother) and her husband had fathered both the pregnancies. A single prior second trimester pregnancy in 2005 was terminated at the same institute, in view of multiple malformations detected on ultrasound (USG) examination. There was scoliosis, crowding of the fetal parts and oligohydramnios on USG. The detailed USG report was not available. She had received anti D after the termination of pregnancy due to her Rh negative blood group status.
In the present pregnancy she was registered with a local practitioner at 6 weeks of gestation. The current pregnancy was a spontaneous conception. All her blood investigations were within normal range. She had missed her first trimester screening. Anomaly USG scan performed at 18 weeks of gestation was suggestive of congenital high airway obstruction (CHAO), bilateral congenital talipes equinovarus (CTEV) and unilateral renal agenesis. The fetal growth was consistent with her dates. Anatomic evaluation showed lungs that were enlarged and hyperechogenic with fluid bronchogram. The diaphragm was everted, trachea and main bronchus were grossly dilated. Fetal cardia was compressed in between the hyperinflated lungs. Heart was centrally located and structurally normal on real time imaging and color Doppler scanning. In addition to above there was unilateral renal agenesis, single umbilical artery and both legs exhibited bilateral severe CTEV. 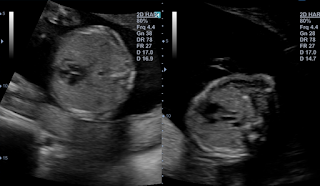 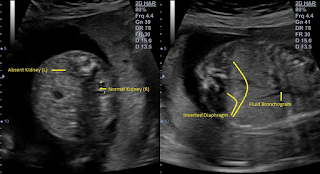 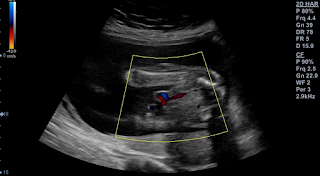 Figure 3. USG image showing single umbilical artery
The genitalia revealed a phallus like structure and hence it was thought to be a male fetus. However abiding by the PCPNDT Act of the country the same was not disclosed to the couple. The examination of the intracranial structures and digits were unremarkable. In the presence of multiple malformation, consistently lethal CHAOS, consanguinity and previously affected sibling the parents were counseled about the possibility of a genetic abnormality and unfavorable prognosis in the index pregnancy. Parents decided to terminate the pregnancy. Autopsy was also offered.
Macroscopic examination of the abortus revealed eyelids that were fused (partial cryptopthalmos), broad nasal bridge and hair line receding up to the corner of the brows. In addition to confirming the ultrasound findings the abortus also had imperforate anus and ambiguous genitalia. The external genitalia revealed phallus with fused labia. Scrotal sac was absent. 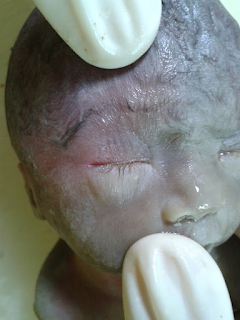 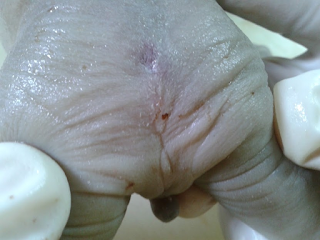 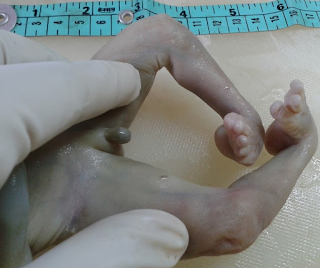 An autopsy was done by the pathologist after the parents consented for the same. Autopsy showed hyperinflated, edematous lungs with rib markings. They were occupying most of the mediastinal space. Heart was compressed, trachea was dilated and the site of obstruction was at the level of the vocal cords in the larynx. In addition spleen was in form of accessory splenules interspersed in the mesentry and there was hepatomegaly. 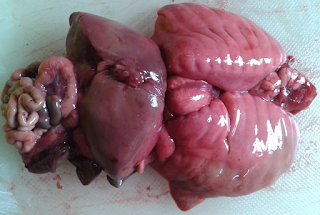 Fraser syndrome was first reported by Zehender in 1872 as a syndrome with complex malformations and multi-system involvement including bilateral cryptophthalmos, syndactyly, hypertelorism, umbilical hernia, abnormal genitalia, anal stenosis and hoarseness of voice.[4] Similar cryptophthalmos syndromes were reported in several other cases.[5] In 1962 Fraser published a case of two siblings who exhibited cryptophthalmos, syndactyly, stenosis of the larynx, defects of the nose and the ear, laryngeal and genito-urinary malformations.[4] Since then the term Fraser syndrome has been used for similar malformation sequences involving multiple organ system, including cases with or without cryptophthalmos (cryptophthalmos spectrum).
Thomas et al reviewed 124 cases of cryptophthalmos. He established the least required diagnostic criteria to differentiate Fraser syndrome from isolated cryptophthalmos.[5] The major criteria were cryptophthalmos, syndactyly, abnormal genitalia and positive family history and the minor criteria included congenital malformations of the nose, ears or larynx, cleft lip and / or cleft palate, skeletal defects, anterior abdominal wall defects, agenesis of either or both kidneys and mental retardation). Diagnosis is based on presence of at least 2 major and 1 minor criterion or 1 major and 4 minor criteria.[5]
Van Haelst (2007) revised the diagnostic criteria described by Thomas due to the variable phenotypic expression. He added airway tract and urinary tract abnormality to major criteria and removed mental retardation and cleft lip and palate from the minor criteria.
Revised major criteria are syndactyly. (cutaneous), cryptophthalmos spectrum (hidden eye), urinary tract abnormalities, ambiguous genitalia, laryngeal and tracheal abnormalities, positive family history of affected sibling and the revised minor criteria are anorectal defects, dysplastic ears, skull ossification defects, umbilical abnormalities, nasal anomalies. The  uncommon deformities are cleft lip/ palate, cardiac malformations, musculoskeletal abnormalities, and mental retardation
For confirmation of diagnosis, 3 major, or 2 major and 2 minor, or 1 major and 3 minor criteria should be present.[6]
In our case as there was fulfillment of criteria the diagnosis was clear. However the variability of phenotype expression can make diagnosis challenging. Most of the literature search suggested the contrasting association between oligohydramnios which is seen with renal agenesis (which would otherwise be associated with hypoplastic lungs) and bilateral hyperechogenic lungs is highly suggestive sonographic marker of Fraser syndrome.[7] However as in our cases the presence of a single functioning kidney accounted for normal liquor levels. To our best knowledge less than 20 cases have been diagnosed prenatally.
The parental genetic testing for the carrier status could not be offered as tests are not available in India. Parents were counseled regarding the 25% risk of recurrence in the following pregnancies and the diagnosis of which could be suspected from 13 weeks of gestation by ultrasound. Although there is single reported case of affected individual alive upto 96 yrs;[8] there are no reported cases of affected individuals with reproductive capacity, to the best of our knowledge.

In conclusion, prenatal diagnosis of Fraser syndrome is possible with an expert sonologist, but due to the great variety of possible malformations the diagnosis will remain doubtful in most cases in which there is no positive family history of affected sibling. High index of suspicion needs to be exercised when multiple malformations are detected.