A cystic pelvic mass is most likely to be an ovarian cyst. Other possible diagnoses include a leiomyoma with cystic degeneration, paraovarian cysts, endometriomas, pelvic hematocele, encysted ascites, hydatid cyst and full bladder. It may be difficult to distinguish the conditions from one another clinically and sometimes even on ultrasonography. A case is presented here in which the clinical and ultrasonographic diagnosis was ovarian cyst, while it turned out to be a leiomyoma with cystic degeneration.

A 36-year-old, asymptomatic woman presented to our outpatient clinic with a USG report showing a loculated cyctic tumor in the pelvis. It had been detected by a private practitioner during evaluation of chronic mild pelvic pain. It was closely related to the top of the uterus. Its size was 7 x 6 x 5.5 cm. It was loculated and contained clear fluid. There was no solid area within the tumor, or on its surface. The right ovary was normal, while the left ovary was not seen. The remaining intraperitoneal structures were normal. A diagnosis of a benign ovarian tumor was made.

She was a second para with two normal deliveries. Both children were well. Her chief complaint was mild chronic pelvic and lower abdominal pain for 4 months. There were no aggravating or relieving factors for that pain. Her menstrual cycles were regular, painless, with moderate flow for 3-4 days every month. Her last menstrual period had been 10 days ago. Her past history was not contributory. Her general and systemic examination revealed no abnormality. Findings of speculum examination of the vagina were normal. Abdominal examination revealed normal findings. Bimanual pelvic examination showed a normal sized uterus, and a 5-6 cm diameter nontender, cystic mass above the uterus. Lateral fornices were empty. A provisional diagnosis of an ovarian cystic tumor was made. Reports of hemogram, fasting and postprandial plasma sugar levels, liver and renal function tests, chest radiograph and electrocardiogram were normal. Her CA 125 level was 18 units/ml. USG performed at our center confirmed the findings of USG done prior to presenting to our center.
The patient opted for a laparotomy rather than laparoscopic surgery. At laparotomy, a kidney-shaped loculated lump measuring about 6 x 5 x 5 cm was found above the uterus, obscuring it. It was cystic and the fluid within it was clear. Further examination revealed that both the ovaries were normal and the tumor was connected by a pedicle measuring 2 mm x 2 mm to the center of the uterine fundus. A diagnosis of cystic degeneration in a subserous pedunculated leiomyoma of the uterus was made. The pedical was electrocauterized and cut. The uterus did not show any other leiomyoma. Hence no further surgery was done. The patient made an uneventful recovery. Histopathology of the mass confirmed the diagnosis of cystic degeneration in a leiomyoma. 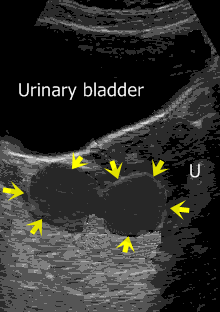 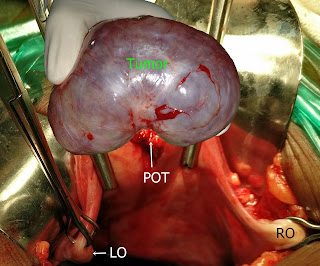 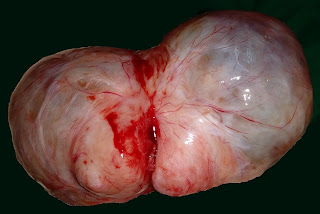 A leiomyoma is a smooth muscle tumor.[2,4] Owing to a compromise of its blood supply, it tends to undergo degeneration.[4] Different types of degeneration seen in a leiomyoma include hyaline, cystic, myxomatous and calcific. A degeneration is seen more commonly in the center of large intramural leiomyomas, where the blood supply is less than at the periphery. When the pedicale of a subserous or submucous leiomyoma elngates and thins, the blood supply to the leiomyoma may get compromised and it may undergo degeneration. In the case presented, the pedicle of the fundal subserous leiomyoma was very small and thin, and there was virtually no blood supply to the leiomyoma. It had not become adherent to any other intraperitoneal structure like bowel, its mesentary or omentum, from which it could have derived its blood supply. It was likely that the pedicle would have broken some time soon and the leiomyoma would have become a free intraperitoneal leiomyoma.
A USG is very useful to distinguish between various conditions that present as cyctic pelvic masses, such as paraovarian cysts, endometriomas, pelvic hematocele, encysted ascites, hydatid cyst and chronic retention with overflow of urine.[4,5,6,7] Performed carefully a USG would have detected the ovaries separate from the mass, and possibly the connection between the uterus and the mass in the case presented. Then a correct diagnosis could have been made preoperatively. It was not considered necessary to perform a computerized tomography or magnetic resonance imaging, because the diagnosis seemed correct. Retrospectively thinking, it is felt that it would not have mattered much, as the mass was benign and needed to be removed, whether ovarian or uterine in origin.

A cystic mass close to the uterus in the female pelvis is not always an ovarian tumor. Though most of the conditions are benign, it is still necessary to make a correct diagnosis of the condition, so that appropriate treatment can be planned. Imaging techniques like USG, CT and MRI are useful for differentiating cystic pelvic masses from one another in an asymptomatic woman.