Endometriosis is defined as presence of endometrium like stroma and glands outside the uterine cavity. There are many causes of scar endometriosis. A common theory is the direct implantation of endometrial tissue in surgical scars. Here we present a case of a 30 year old female presenting with scar endometriosis after 3 years of tubal ligation.

Endometriosis is defined as presence of endometrial-like stroma and glands outside the uterine cavity.[1] The name ‘endometriosis’ was given by Rokitansky in 1860. It is a rare entity. It is reported in 0.03-1.08 % of the women following obstetric or gynecological surgeries. Post salpingectomy endometriosis is documented in 20-50% of the tubes which are examined after ligation. It occurs in 8-15 % of the women of the reproductive age group. It usually occurs in region such as abdominal wall, ovaries, cul de sac, uterine ligaments, pelvic peritoneum, bowel and rectovaginal septum. It can also be present in unusual places like CNS, thorax, urinary tract, gastrointestinal tract and in cutaneous tissues.[2] There are many causes of scar endometriosis. A common theory is the direct implantation of endometrial tissue in scars during the operation which commonly follows obstetric and gynecology surgeries.[3]

A 30 year old G4P3L3MTP1 with mini laparotomy tubal ligation done 3 years back at a tertiary medical care center came to the outpatient department with chief complaints of cyclical pain at tubectomy scar site since 2 years. She also had complaints of bloating sensation during menses. She did not have any previous history of endometriosis. Her general examination was normal. On local examination there was presence of 4 x 3 cm size nodule at the tubectomy scar site. The nodule was tender and immobile. Fine needle aspiration cytology (FNAC) showed presence of endometriosis. Ultrasonography (USG) of the abdominal wall was suggestive of 4 x 3 cm size scar granuloma with no abnormalities of the uterus and ovaries. Small vertical incision was taken over the nodule of about 3 cm in size. There was presence of fibrous tissue which was excised by sharp dissection and sent for histopathology. Post-operative stay in the ward was uneventful and she was discharged on day 5 of the procedure. Histopathology examination of the tissue showed fibrous tissue with few scattered endometrial glands and endometrial stroma. 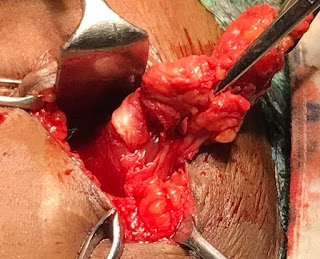 Figure 1. The scar endometriosis tissue being excised at the previous tubectomy scar site 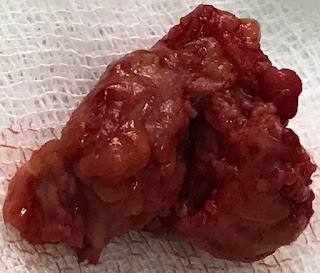 Scar endometriosis is a rare and uncommon diagnosis. One should maintain a high level of suspicion if a woman presents with cyclical pain with a painful swelling at an abdominal incisional site, most commonly after any pelvic surgery. In such instances scar endometriosis should be considered as an important differential diagnosis.