Germ cell tumors of the ovary are highly malignant and are prone to metastases to neighboring organs such as the sigmoid colon and uterus. We describe a case in which an ovarian malignant germ cell tumor occurred in a 6 year old girl who presented to our institution with abdominal pain and a palpable abdominal mass arising from the pelvis. Imaging showed a pelvic mass possibly arising from the retroperitoneum with raised serum tumor markers. On staging laparotomy a Stage III ovarian tumor involving the uterus and adherent to the sigmoid colon was seen. Frozen section revealed malignant germ cell tumor of the ovary. Malignant germ cell tumors of the ovary are common in occurrence and should be suspected in the pediatric age group. Surgical removal in tumors involving uterus and bowel requires expertise and precise dissection.
Introduction

A 6 year old girl was admitted in the ward with complaints of pain in abdomen and distension of the abdomen since 2 weeks. She also complained of fever, weight loss and vomiting during this time along with tingling and numbness of the right leg. Per abdominal examination revealed a tense solid and cystic mass arising from the pelvis and extending upto the umbilicus. Her tumor markers were as follows: CA 125 was 209 U/mL, CEA was 66 ng/mL, AFP was 32859 ng/mL, hCG was < 1.0 mIU/L, and LDH was 1183 U/L. Ultrasonographic examination of the pelvis suggested an ovarian tumor. Contrast enhanced CT (CECT) scan done subsequently showed 10x7x5 cm retroperitoneal mass extending into the presacral space displacing the bowel anteriorly and extending upto the umbilicus. Inferiorly the mass extended upto the umbilicus (Figure 1-3) An oncosurgical opinion suggested the mass was clinically operable and she was posted for a staging laparotomy. On staging laparotomy an ovarian tumor involving the uterus and adherent to the sigmoid colon was seen. The tumor was hemorrhagic in appearance and friable in consistency. Contralateral ovary appeared normal. Unilateral salpingo-ooporectomy with hysterectomy was done and sample was sent for histopathology. Frozen section revealed malignant germ cell tumor of the ovary. A diagnosis of stage III malignant germ cell neoplasm was made. Tumor was resected around the sigmoid colon but a colostomy was deferred owing to the poor socioeconomic status of the child. She is doing well postoperatively (Figure 4). She was referred to the medical oncologist for adjuvant chemotherapy. 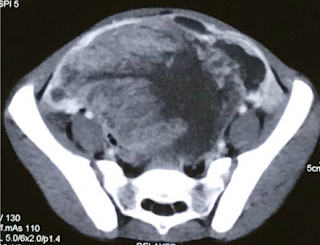 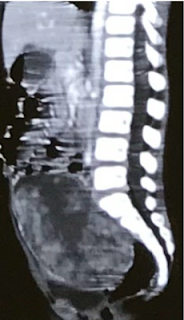 Figure 2. CECT scan of the abdomen and pelvis (lateral view) shows the round tumor with heterogenous appearance suggesting its malignant nature. 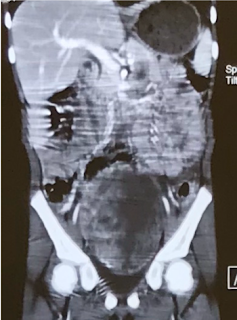 Figure 3. CECT scan of the abdomen and pelvis showing pelvic tumor extending upto the umbilicus superiorly and the acetabulum inferiorly. 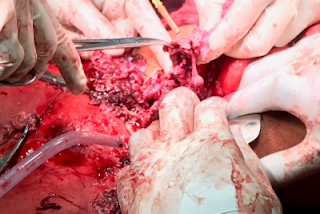 Figure 4. Intraoperative image shows the hemorrhagic appearance and friable nature of the mass.

Once a pelvic mass is detected, especially in younger female patients, the standard workup for suspected germ cell tumors (GCTs) requires lactate dehydrogenase (LDH), alpha-fetoprotein (AFP), and beta-human chorionic gonadotropin (beta-hCG) levels. If any levels are elevated, they may assist in diagnosis and/ or follow-up of women diagnosed with malignant ovarian GCTs.[2]
Cytoreductive surgery is generally recommended for malignant ovarian germ cell tumors. Debulking to a level of minimal residual disease improves response to chemotherapy. For those who have completed childbearing, hysterectomy with bilateral salpingo-oophorectomy (BSO) is appropriate. Preservation of the contralateral ovary leads to “recurrent” dysgerminoma in 5 to 10 percent of retained gonads during the next 2 years.
Chemotherapy has replaced radiation as the preferred adjuvant treatment for all types of malignant ovarian germ cell tumors. Stage IA dysgerminomas and stage IA grade 1 immature teratomas do not require additional chemotherapy. More advanced malignant ovarian germ cell tumors have been treated with combination chemotherapy.[3] The standard regimen is a course of bleomycin, etoposide, and cisplatin (BEP) for five days given every 3 weeks. Variations of this do exist in practice.

Malignant germ cell tumors of the ovary are common in occurrence and should be suspected in the pediatric age group. Surgical removal in tumors involving uterus and bowel requires expertise and precise dissection. Knowledge of pediatric anatomy is important in tackling this histological type of ovarian tumors.