Uterine inversion is defined as descent of the uterine fundus to or through the cervix. Chronic, non puerperal, postmenopausal uterine inversion is an extremely rare entity. Here we are presenting a case of a 60 year old, postmenopausal woman who presented as a case of prolapse but who had chronic non puerperal uterine inversion secondary to multiple uterine submucosal pedunculated leiomyoma, She was managed by vaginal myomectomy followed by correction of inversion of the uterus by Kustner’s  method followed by abdominal hysterectomy.

A 60 years old, postmenopausal woman, para 4 living 1, all full term normal vaginal  home deliveries, came with complaints of something coming out from vagina since 1 month which was non reducible. She had foul smelling vaginal discharge since 2 months.  She was a known case of hypertension since 2 years; well controlled on medication.  Her general condition was fair and vital parameters were stable. Abdomen was soft. On local examination there was a large, elongated, congested, firm mass of approximate 15 x 10 cm present, mass was irreducible, 2 areas of ulcerations of size 3x3 cm covered with foul smelling slough were seen. Two submucosal fibroids were present of size approximate 4x4 cm on right lateral wall near right cornua and 3x3 cm on left lateral wall behind left cornua. Cervical ring was seen and felt. Clinical impression was chronic non puerperal infected uterine inversion associated with multiple fibroid. Other differential diagnosis was uterine procidentia. 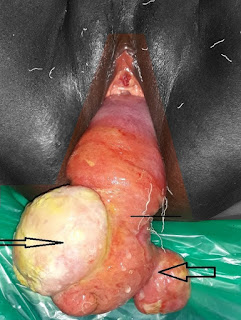 Figure 1. The prolapsed mass with fibroid. Leiomyoma is pointed out by arrow.

She was hospitalized. Pap smear was severe atrophic and inflammatory. Ultrasonography  (USG) of the pelvis showed that the uterus was not seen in the pelvis. MRI was suggestive of complete uterine inversion grade four with 3x4.5x4.5 cm pedunculated posterior wall submucous fibroid, 2x2 cm intramural fibroid over fundus and a 4.8x3.4x3.5 cm anterior wall submucosal fibroid with degeneration and ulceration. 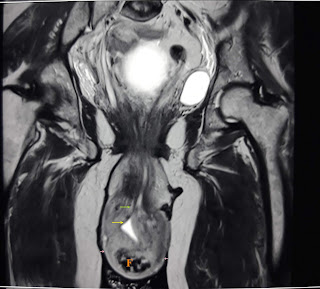 All blood investigations except blood sugar were within normal limit. She was diagnosed with diabetes mellitus after hospitalization and started on oral hypogycemic drugs. Daily twice dressing of inverted uterine mass was done using povidine iodine, and the prolapsed mass was covered with glycerine and acroflavin dressing. She had an episode of transient stroke in the ward. Neurologist advised a CT scan of the brain but no abnormality was detected.  She was started on anticoagulants. 2D Echo done was within normal limit with ejection fraction of 60%. She also had urinary tract infection which was treated according to culture sensitivity report.  Corrective Surgery was postponed as she was unfit. She was planned for surgery after getting fitness from anesthetist, endocrinologist and neurologist.  Procedure performed was vaginal myomectomy followed by correction of inversion of uterus by Kustner’s method followed by abdominal hysterectomy. Surgery was performed under general anesthesia. Posterior colpotomy was done and diagnosis of inversion was confirmed. 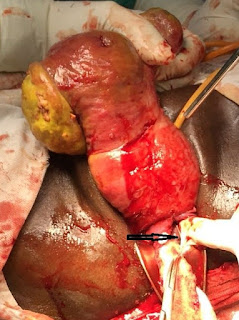 Submucosal fibroid was enucleated. Reposition of the uterine inversion was done by Kustner’s method. Cervical ring was divided vertically in the midline posteriorly. Edges of cervix were held with Alli’sforceps. There was still difficulty in reposition hence the incision was extended upto the isthmus and posterior uterine wall. Following which uterine inversion was corrected, which was confirmed on per speculum examination. Abdominal hysterectomy was done by standard method. Histopathology report showed a leiomyoma. Uterus and cervix had no evidence of malignancy. 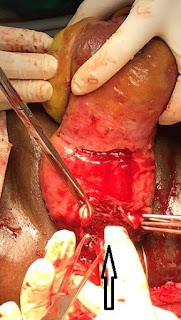 Figure 4. Kustner's operation. Incision of the posterior cervical ring and identification of the edges of the cervix. 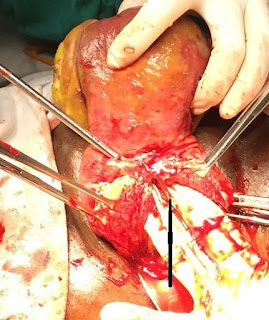 Figure 5. Kustner's operation. Incision extended to the posterior wall of the uterus

On day 3 of surgery She developed signs of sepsis. She was shifted to intensive care unit. Higher antibiotics were started. Coagulation profile was deranged and correction with fresh frozen plasma was given as per hematologist’s advice. Her condition deteriorated and she succumbed on post operative day 16  .

They present with symptoms of something coming out from vagina, irregular vaginal bleeding and offensive vaginal discharge.[6, 7] Chronic inversion is some times confused  with fibroid polyp. Our patient presented with something coming out from vagina, with foul smelling discharge and multiple ulceration. USG is first diagnostic modality of choice. MRI and CT scan are also useful diagnostic tools.[8, 9]
Rectification surgery is definitive line of treatment. Unlike acute inversion which requires immediate correction, chronic inversion is to be treated electively.  Preservation and/ or removal of the uterus along with rectification is determined by factors like age, parity, and associated complicating factors. Since our patient was postmenopausal, rectification surgery followed by hysterectomy was done. Many operative procedures for the treatment of chronic inversion are described amongst these the most common abdominal procedures are Huntington’s and Haultain’s  and  vaginal procedures are mainly Spinelli’s and Kustner’s operations.[10,11,12] Spinelli’s and kustner’s operation are both  performed vaginally, are similar with the exception that in Spinelli’s surgery the approach to divide the cervical ring is anterior whereas in Kustner’s procedure the  posterior approach is used and the incision is placed on the posterior cervical ring.[13] Kustner’s approach was suitable here as the risk of damaging the bowel was small, because of the deep reflection of the pouch of Douglas whereas anterior approach included  danger of damaging the bladder during separation, risk being more due to complete inversion. In Haultain’s  procedure, done transabdominally the constricting ring is incised posteriorly by a vertical incision and then the inversion is corrected. In Dobbin’s procedure, the cervical ring is divided in midline anteriorly by an abdominal approach and then the inversion is corrected.

Once a diagnosis is established the surgical correction can be done by choosing the best option from the different available ones as described in literature.