Adherent placenta diagnosed in the first trimester is a rare occurrence. Most of the cases are detected later in pregnancy. A case of morbidly adherent placenta at 13 weeks of gestation is presented here. The surgical management consisting of laparotomy, removal of retained products of conception (RPOCs) and uterine repair is presented.

A 27 year old woman G3P1L1MTP1 at 13 weeks and 2 days of gestation by menstrual dates presented with complaints of vaginal bleeding since 2 months. She was referred from a primary private center with ultrasonography (USG) suggestive of 10 weeks gestation and with an impression of missed abortion. A differential diagnosis of invasive mole was also mentioned. She reported vaginal bleeding since 2 months that had increased over the last few days. She denied history of passing grape like masses per vagina. She gave history of taking oral contraceptive pills as prescribed by private practitioner. In her first pregnancy, a lower segment cesarean section was done in view of placenta previa, two years prior. This was followed by a surgical termination of pregnancy by dilatation and curettage, in view of failure of contraception. She denied undergoing any other uterine procedures. On examination, she was stable, well oriented and afebrile, pale but with no tachycardia, with blood pressure 110/70 mm of Hg, and unremarkable cardiovascular and respiratory system examination. Abdomen was soft and non-tender, and showed healthy well healed Pfannenstiel scar. Uterus was just palpable. Speculum examination revealed a healthy cervix and vagina with minimal bleeding, and no passage of clots. On vaginal examination internal cervical os was closed and the uterine size was 14-16 weeks. β HCG was 601 mIU/ml and the value repeated after 48 hours was 430 mIU/ ml. Serum TSH (1.5 µUL/ml), chest x ray and electrocardiogram were normal. Ultrasonography was advised and it showed retained products of conception with suspicion of myometrial invasion at lower uterine segment, approximately at the site of the previous cesarean scar. For confirmation, magnetic resonance imaging was done, and it showed similar findings with adherence at the scar site, most likely to be placenta percreta (figure 1). 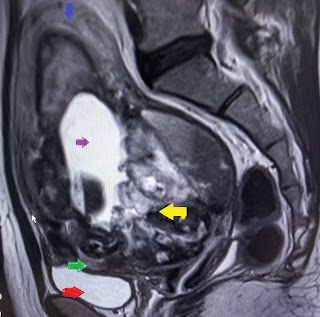 Decision of exploratory laparotomy was made, and possibility of hysterectomy was explained, and appropriate consent was taken. Intra-operatively dense adhesions between lower uterine segment and bladder were released by sharp dissection, and upon opening uterovesical layer of the visceral peritoneum, placenta was seen just beneath the thinned out uterine serosa. Transverse incision was taken after sufficient mobilisation of bladder.  Placenta and retained products of conception, amounting to almost 300 ml were removed and sent for histopathological examination, which confirmed RPOCs. Lower part of the anterior uterine wall was thinned out, friable and multiple button holes formed. In the process of sharp dissection from the thinned out anterior uterine wall from the bladder, inadvertent injury to the bladder serosa occurred, involving the posterior wall of bladder (3 cm in length). It was also noted that the bladder serosa was densely stuck to the uterus. Urologist who were called repaired the bladder without tension in two water tight layers.(Figure 2). The thinned out button hole part of the uterine wall was excised and then the healthy part of the uterine lower segment that was identified after further dissecting the urinary bladder by the urologist was closed in a single layer with ployglactin No 1-0 suture material. 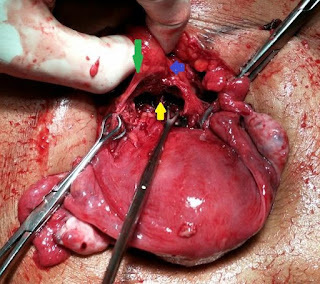 A 12 F suprapubic catheter was inserted and 20 FR per urethral catheter was inserted, and left in situ for 21 days.  She was given 1 unit of blood transfusion intraoperatively. Intra-peritoneal drain was also inserted.  Post operative period was uneventful. Intravenous antibiotics were continued for two weeks and an anti-spasmodic tablet Solefenacin 5 mg twice a day was given till catheter removal. Urine culture showed no growth. Renal function tests were monitored and were within normal limits. Ultrasonography on day 7 postoperative showed no collection. Tablet Nitrofurantoin modified release 100 mg twice a day was started as catheter prophylaxis. Skin sutures were removed on day 15. There were no postoperative febrile episodes and overall post operative recovery was uneventful. Intraperitoneal drain was removed on postoperative day 3. Before removal of urinary catheter, cystoscopy that was done showed integrity of bladder. Per urethral catheter was removed after 3 weeks. After resumption of normal voiding function, suprapubic catheter was removed.

Adherent placenta is mainly a problem of late gestation. However, it can occur in early pregnancy also. There is considerable overlap in the pathogenesis of cesarean scar pregnancy and placental adherence in early pregnancies.[4] The risk factors of adherent placentae include previous uterine surgery and curettage.[5] Our patient also had these risk factors (one prior LSCS and one curettage). Termination of pregnancy, including by hysterotomy, has been reported as early as 19th week of gestation. Our patient was in her 13th week of gestation at the time of the procedure. However, it was already an abortion, and she required evacuation of the retained products of conception, through an abdominal approach. In this context, it is interesting to note that most of the adherent placentas diagnosed in early pregnancy are done so after the pregnancy has been terminated. This has been reported in a 31 case series by Yu et al.[6] However, in our case, the diagnosis was achieved prior to the termination of pregnancy, during evaluation for persistent vaginal bleeding. In our case, the patient had been referred to us with a differential diagnosis of vesicular mole. This was because in the ultrasonograpy the features were that of intrauterine hypoechoic contents with vascularity. However, the β hCG was in the range of less than 1000 IU/ ml. Hence, the diagnosis of vesicular mole was ruled out.  The ultrasonography findings not only diagnosed retained products of conception but also diagnosed the possibility of placenta accreta. The confirmation was done by magnetic resonance imaging. While  MRI is an established clinical tool for adherent placenta, whether it should be used as a first line modality is doubtful.[7] Hysteroscopic procedure for evacuation of retained products of conception, following which diagnosis of accreta was attained has also been reported by Guarino et al.[8] However, we preferred an abdominal approach. Intraoperative difficulties encountered were an extremely thinned out lower uterine segment, and a densely adherent bladder. A similar case report by Gupta et al had also described identical difficulties.[9]  In our patient, inadvertent bladder injury occurred. Checking for bladder integrity is recommended, whenever sharp dissection of the lower uterine segment from a densely adherent bladder is done.[9] However, postoperative recovery was uneventful and she regained good voiding function and was voiding normally at 2 months follow-up. Usually, in such cases massive blood transfusion is required.[10] However, our patient required only one unit blood transfusion.

Here we have discussed a case with adherent placenta being diagnosed and managed in the first trimester of pregnancy. Abdominal approach was opted for the removal of retained products of conception and the post operative period was uneventful. With timely diagnosis and appropriate management of such cases, one can have a favorable outcome despite the dreaded complications associated with this condition.