Abdomino-pelvic cystic tumors are encountered quite frequently and are often diagnosed early due to various radiological modalities available. These masses are usually diagnosed incidentally due to imaging modalities available. Therefore presentation of huge tumors has become rare. But sometimes these patients present late with huge abdominopelvic mass and diagnosis is possible only at laparotomy and after histopathological examination as was seen in our patient. We present a case report of a 50 year woman who had a past history of hysterectomy, who underwent exploratory laparotomy for ovarian cyst but intraoperatively the cyst was found to be occupying the mesentery of descending colon with mucinous content, thus a probable diagnosis of mesocolon cyst was made, although a final diagnosis of mucinous-cystadenoma was made on histopathology.

Mucinous cystic neoplasms (MCN) usually arise in the ovary and can arise at various extra-ovarian sites as they share a common pathway of development.[1] MCN are rare tumors of uncertain histogenesis and should be considered in the differential diagnosis of abdomino-pelvic cystic masses. The rarest type of MCN is of the mesocolon which can present as a abdomino-pelvic mass in the spectrum of mesenteric cysts.[2] MCN are usually diagnosed incidentally on radiological imaging and sometimes can present with nonspecific or chronic symptoms as was seen in our case. A mesocolonic MCN masqurading as an ovarian tumor is presented here.

A 50 year old woman, married for 30 years came to the gynecological outpatient department with dull aching  pain in abdomen and heaviness in the abdomen for 6 months. She had also noticed a lump in the lower abdomen which had gradually increased in size. There was no history of acute pain in abdomen, loss of appetite or weight loss. There was a history of total abdominal hysterectomy done in 2015 for a fibroid uterus. She had a normal vaginal delivery 23 years back. She was diagnosed case of  myotonic dystrophy and was on  phenytoin 100 mg PO q12h. She had been investigated by gastroenterologist for deranged liver function tests and presence of a subhepatic cyst on magnetic resonance scan. Her liver biopsy had been found to be normal, and  no obvious cause was found for deranged liver enzymes. Her general and systemic examination findings were normal. Abdominal examination showed an infraumbilical vertical midline scar of previous hysterectomy and a 24 weeks' size mass arising from the pelvis, which was non tender, cystic with restricted side to side mobility. On speculum examination vaginal vault was healthy and on vaginal examination a 24 weeks mass was felt above the center of the vault. Her investigations for fitness for anesthesia, including liver function tests, showed normal results. Her ultrasonography (USG) of the abdomen and pelvis was done which showed a 14×12×10 cm well defined cystic lesion arising from left adnexa till umbilicus with few internal echoes, left ovary was not seen separately and right ovary was obscured and uterus was not visualized due to postoperative status. There was also evidence of right moderate hydronephrosis and proximal hydroureter and left mild hydronephrosis probably due to compression by the cyst. She also underwent Computerized tomography (CT) of abdomen and pelvis which showed a complex left ovarian cyst of 13.5×15×14 cm with septations and calcification, fat planes were preserved and presence of calcified lymph nodes in the mesentery. There was bilateral hydronephrosis and hydroureter due to extrinsic compression of the ureters, iliac vessels were compressed by the cyst but fat planes were preserved. Her serum CA- 125 was 23U/ml. Bilateral ureteric catheterization was done prior to an exploratory laparotomy.  Laparotomy was done through a vertical midline incision. It showed a 15×15×10 cm cystic mass occupying the mesentery of the descending colon,  which was seen stretched circumferentially over the cyst. The cyst was adherent to the posterior parietal peritoneum. In view of these findings a surgeon were called. He found the cyst to be attached to the descending colon. He separated it from the colon, dissected and enucleated it. The cyst was accidentally ruptured at the time of dissection and mucinous material was drained from the cyst which was sent for cytological examination. No malignant cells were found in the fluid. Frozen section of the cyst was suggestive of mucinous cystadenoma. A 6 to 7 cm long serosal tear in the descending colon at the site of separation of the cyst was noted and was sutured with No. 2-0 black silk with simple interrupted sutures. Hemostasis was achieved. The right ovary was found to be atrophic. There was a 2×2 cm sized  simple cyst in it. The right ovary and  lateral one third of the right fallopian tube were found to be  densely adherent to the vault and sigmoind colon and rectum. There were dense adhesions over the position of the left ovary and fallopian tube, and they could not be identified. An intraperitoneal drain was kept and the abdomen was closed. The patient was kept nil by mouth for 48 hours and was given intravenous fluids in that period. She made an uneventful recovery. The final histopathology report revealed that the cyst was a mucinous cystadenoma. 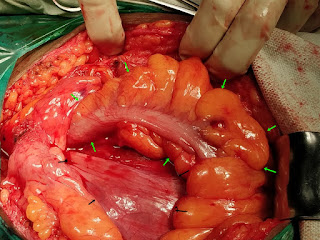 Figure 1. Laparotomy findings – the cyst is in the center (black arrows) with descending colon (green arrows) along with its mesentry completely encasing the cyst. 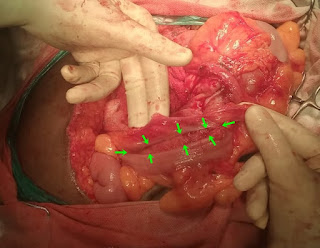 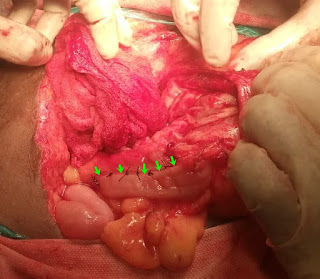 Figure 3. Repair of the serosal tear with simple interrupted sutures of No. 2-0 black silk (green arrows).

MCN can arise in the ovary and various other extra-ovarian sites like the appendix, retroperitonium, spleen, bowel, lung, hepatobiliary tract, breast and the mesentery.[3] MCN are predominately found in adult females. The ovarian and extra-ovarian MCN have a common pathway of development. They are usually diagnosed incidentally or present with nonspecific and chronic symptoms like abdominal distension, pain, a palpable mass or symptoms of gastrointestinal or urinary obstruction.[2] There is often diagnostic dilemma in the diagnosis of MCN and its origin due to nonspecific symptoms, absence of any particular radiological features or specific biochemical markers.[4,5] In the case presented here, despite the use of imaging modalities like USG and CT, diagnosis of descending mesocolon cyst was made on laparotomy and final diagnosis of mucinous cystadenoma was made on histology. The important hypothesis which is postulated in the pathogenesis for extra ovarian MCN are celomic mucinous metaplasia of epithelial cells or peritoneal invaginations in the course of ovarian decent.[6] The various other proposals given in literature have been attributed to the ectopic or implanted or supernumerary ovary.
Our case adds to one of the rare cases of MCN which was found in the mesocolon. The diagnosis could not be achieved preoperatively and surgery was performed jointly by surgeon and gynecologists due to the involvement of descending mesocolon and preoperative misdiagnosis of the cyst as an ovarian cyst.  It also highlights the importance of intraoperative frozen section which aided in our management. Surgery is the mainstay of treatment and can be performed by laparotomy or laparoscopically. The surgical treatment of choice is complete excision. If it is not possible, marsupialization may be done, though it can lead to development of pseudomyxoma peritonei at a later date.