Mayer-Rokitansky-Kuster-Hauser (MRKH) syndrome is aplasia of uterus and upper part of vagina. Their presentation is around puberty with primary amenorrhea. It can involve the urinary, skeletal, rarely cardiac or auditory system. The incidence and presentation of each association are varied. Approach to these patients should be pan systemic to diagnose other morbidity and to manage accordingly. One such variant of MRKH syndrome is presented here

MRKH syndrome is characterized by congenital aplasia of the uterus and upper part of the vagina with 46XX karyotype and normal secondary sexual characteristics. The incidence is around 1: 4,500.[1] MRKH type II is associated with renal and vertebral problems. Mullerian duct aplasia-Renal agenesis-cervicothoracic somite dysplasia is abbreviated and referred to as MURCS syndrome. It can have cardiac or hearing defects.[2] GRES Syndrome, the association of Genital Renal And Ear abnormalities has an incidence of 1: 50,000.[3] Cardiac and auditory defects are less frequent with variable severity.[4

A seventeen year old girl presented to the gynaecology outpatient department with complaints of primary amenorrhea. She also had occasional dull aching pain abdomen, which was not cyclical in nature. She was born of a nonconsanguineous marriage. None of her siblings had any significant medical or surgical history. She was averagely built and nourished. Tanner stage V breast development was noted. She had discrete facial dysmorphia with short neck (figure 1) not characterizing any known genetic syndrome. Neck movements were unrestricted. 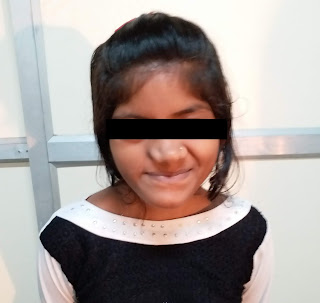 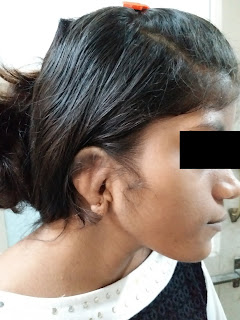 Genital inspection revealed normal clitoris, labia and urethral meatus and a small blind pouch at the introitus. No thinned out/ bluish tinged bulging membrane noted. On rectal examination, no palpable uterus or mass was felt in the midline or laterally. Medial aspect of right thigh had a scar mark of previous skin graft harvest. She had undergone surgical construction of right pinna in childhood. This explained the child covering her right ear with locks of hair. On uncovering the right ear, a reconstructed auricle was seen. (Figure 2). Left sided pinna appeared normal. On ultrasonography of the abdomen and pelvis, uterus and ovaries were not appreciated. Karyotyping was 46 XX. MRI abdomen and pelvis was suggestive of a small uterus seen to the left of the midline. Reported endometrial thickness was 16 mm. An atretic cervix could not be ruled out, and bilateral ovaries were seen. Both kidneys were normal. A diagnosis of Mayer-Rokitansky-Kuster-Hauser syndrome was made. Her medical records revealed profound deafness right ear and otherwise normal left ear hearing. There was no deformity in the spine. The family was explained about the syndrome and management options.

After a consent, she was posted for a diagnostic laparoscopy with uterovaginal anastomoses or hysterectomy as per findings. Plastic surgeons evaluated and counseled the patient for vaginoplasty at a later date. Examination under anaesthesia confirmed a blind vaginal pouch of 3 cm. Laparoscopy revealed hypoplastic right fallopian tube. Bilateral ovaries were normal looking. A small hemi uterus of about 2 x 2 x 3 cm was noted with left sided round ligament and fallopian tube tube near the left pelvic wall (Figure 3). No cervix, connecting tissue or fibrous band between the uterus and vagina was noted. In situ findings of complete cervical agenesis was explained to the relatives. The procedure of anastomoses was deferred in view of huge anatomical gap between uterus and vagina. Hysterectomy in a rudimentary uterus was currently unindicated as she did not have cyclical abdominal pain which would have indicated of a functional endometrium. 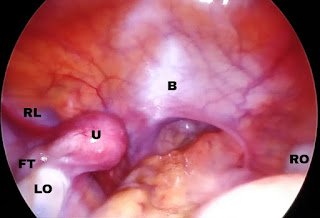 The patient and her parents were counselled about the menstrual, sexual and fertility issues in her case. Need for hysterectomy later, psychosexual counselling and later the need for vaginal dilatation before marriage and surrogacy options for conception were explained. The patients family has been explained about the need for follow up to monitor each of the above issues

Although genetics of MRKH syndrome is not exactly known, most cases are sporadic.[5] However when familial, autosomal dominant inheritance with an incomplete penetrance is noted.[6] As variable presentation is seen, prevalence of this syndrome is underestimated. Type I MRKH is less frequent than MURCS association.[7] This explains the need for evaluation of every case of Mullerian agenesis for other systemic affections and vice versa.  Symmetric or asymmetric uterine hypoplasia with unilateral or bilateral tubal hypoplasia or aplasia is the characteristic feature of type II MRKH syndrome.[8] Our case had asymmetrical, left hypoplastic uterus with hypoplasia of right tube.

The anomalies with Type II mainly involve spine[9], less frequently, face and extremities. Facial asymmetry has been described by Pillay K et al[10], and was also noted in our case. Middle ear malformations or sensorineural defects of varying severity are associated with 10 to 25% of MURCS patients.[11,12] With MRKH type II syndrome our patient was also advised cardiac and skeletal evaluation.

Conclusion
Clinicians must include evaluation for renal, skeletal, facial and cardiac malformations in patients with primary amenorrhea. This case brings out the association of MRKH syndrome with other systemic abnormalities, highlighting the possibility of predicting the diagnosis in childhood, before the onset of amenorrhoea, especially when other malformations are noted.