A 22 year old woman, married for 3 years, presented for evaluation of primary infertility. She was cohabiting for 3 years without use of any contraceptives, at a rate of 4-5 times a week. Her menstrual cycles were regular, every 28 to 35 days, with moderate flow and mild dysmenorrhea. Her last menstrual period had been 31 days after the preceding period, but was associated with scanty menstrual flow for only 2 days. Her medical and surgical history was not contributory. Her general and systemic examination revealed no abnormality. Gynecological examination showed normal abdominal findings, normal cervix and vagina, and normal uterus in anteverted position. Her husband's semen examination showed normal findings. Her investigations for fitness for anesthesia gave normal results.

Hysteroscopy and laparoscopy were performed. Hysteroscopy showed normal findings. Laparoscopy showed a normal sized and shaped uterus, normal fallopian tubes and ovaries, normal bowel and omentum (figure 1). There was an oval red elevated lesion on the back of the uterine corpus. It measured about 1 cm x 0.5 cm. It was elevated and had a flat surface. It had a pale band along its periphery, measuring 1-2 mm in width. A primary abdominal ectopic pregnancy was suspected from its appearance, being similar to that of another case described by the same author in the past.[2] A grasping forceps was passed through a second port and the lesion was elevated from the uterine surface. It could be peeled off easily, without any bleeding from its bed. The surface of the red lesion showed fine processes resembling early chorionic villi. It was fixed in fomalin and sent for histopathology. The patient made an uneventful recovery. She had menstrual flow one week after the laparoscopy. She bled for 4 days, using 3 to 4 pads per day. 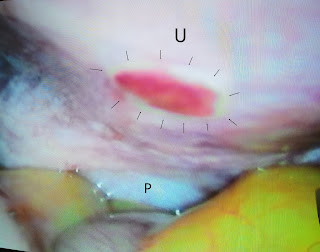 Histological examination showed  sheets of large polygonal cells with abundant cytoplasm, minimal atypia. There was no chorionic tissue. Considering the scanty amount of tissue in the original biopsy and the fragile nature of the tissue resembling early chorionic villi, it was felt that chorionic villi had possibly been lost in the fixative by detachment from the primary biopsy. A request was made to centrifuge the fixative in the container in which the biopsy was sent. Residue after centrifugation was subjected to histological examination. It showed a few chorionic villi.

The case was that of a primary abdominal ectopic pregnancy as per Studdiford's criteria - both fallopian tubes and ovaries were normal, there was no uteroperitoneal fistula, the pregnancy was related exclusively to the peritoneal surface and was early enough to exclude a secondary implantation.[3] It also satisfied Friedrich and Rankin's criteris of a primary abdominal pregnancy - it was less than 12 weeks of gestation and was related solely to the peritoneal surface.[4] Such a pregnancy can occur with the use of assisted reproductive techniques.[5] But the case presented had not received any treatment for her infertility prior to presenting to our center.

Documentation of image of such an early pregnancy is very rare because most of such cases are diagnosed by serial b-hCG assays, and are managed either by observation or administration of methotrexate.[2] This case is reported so as to help build up database of images of very early primary abdominal ectopic pregnancies.

I thank Dr. Shruti Panchbudhe for taking photo of laparoscopic findings in this case.