Glanzmann thromboasthenia is a rare inherited hemostasis disorder characterized by gp2b/3a dysfunction. Here, we present a case with Glanzmann thrombocythemia, which usually manifests in childhood. The patient presented with bleeding after coitus.

Glanzmann thromboasthenia is a rare autosomal recessive recessive disorder that results from deficiency or defect of platelet glycoprotein (GP) IIb/ IIIa receptors. It is associated with severe bleeding tendencies. We want to present this case because of unusual manifestation and late diagnosis of Glanzmann thromboasthenia. It is the first case in literature to the best of our knowledge.

A 24 year old female patient presented with bleeding and spontaneous ecchymosis, which lasted 3 days after coitus. Her menstrual history revealed that her menstrual bleeding lasts 7-8 days on an average and sometimes is prolonged to 15 days. She had often epistaxis in her childhood. She was a virgin and her gynecological examination revealed bleeding due to coital lacerations at hymen after first coitus. Two ecchymoses in the right forearm (3x5 cm) were observed. She had mild vaginal bleeding and no hypotension. She used up to four pads per day. Local methods for stopping vaginal bleeding were performed. Adrenaline sponge was used for bleeding and it stopped totally after ten days. No platelet transfusion was required. In her biochemical parameters hemoglobin was 7.6 g/dl, MCV was 53.1 fl, RDW was 17.0 %, platelet count was 177 x 103/ microliter, mean platelet volume (MPV) was 10.3 fL, serum iron was 17 mg/dl, TIBC was 461 mcg/dl, saturation was 3.6 %. Von Willebrand factor antigen was 74.516 %, Plasma fibrinogen levels were 229.4 mg/dl, INR was 1.00, aPTT was 22.6 sec, bleeding time was 23 min 35 sec, collagen epinephrine was 279 sec (normal(n): 82-150 sec), and collagen ADP> 300 sec (n: 62-100 sec) with platelet function analyser (PFA)- 100 test. Peripheral smear showed isolated large platelets (Figure 1). ADP, ristocetin, and collagen aggregation were 0 %, 9 %, and 2 %, respectively. (Figure 2.) High-dose ristocetin aggregation was performed with 16 microliter (micl) (Figure 3.) High-dose ristocetin provided a partial response. (Chrono-log 810 ca 2005). For iron deficiency anemia ferrous fumarate 200 mg /day was started. 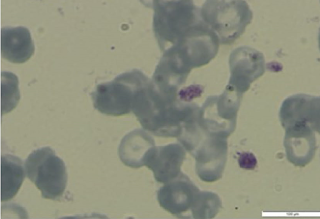 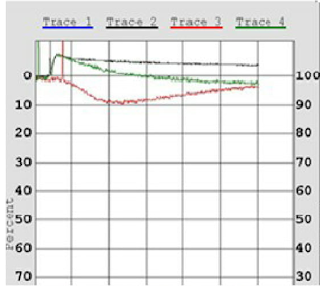 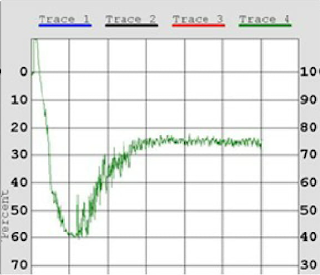 Glanzmann thromboasthenia was diagnosed with the peripheral smear findings wherein isolated platelets rather than clumped platelets were seen, prolonged bleeding time, and partial response to ristocetin. In Glanzmann thromboasthenia, which is a very rare bleeding disorder, the concordance of the clinical and laboratory findings is important. Although the clinical findings are encountered in childhood, different clinical appearances should not be overlooked. Platelet transfusion may be performed and antifibrinolytic agent may be administered prior to an invasive intervention or during severe bleeding.[2,3]