Intrapartum Chemical Burns Of The Fetus

Chlorhexidine gluconate-cetrimide solution has been recommended for usage in under-resourced settings for vaginal examinations. Chlorhexidine has antiseptic as well as disinfectant properties in varying concentrations. However, it has been associated with a number of complications, such as anaphylaxis when used on mucous membranes and dermatitis. The present case is that of a neonate with first degree burns of the buttocks due to use of solution of chlorhexidine gluconate- cetrimide before vaginal examination.

An aqueous solution containing cetrimide solution BP equivalent to cetrimide IP of 15.0% w/v and chlorhexidine gluconate solution IP 7.5% v/v equivalent to chlorhexidine gluconate 1.5% w/v should be used at a recommended dilution of 20 ml solution with 1000 ml of water for aqueous preparation or 35 ml solution with 200 ml water made up to 1 liter with spirit for the purpose of preoperative skin disinfectant and other invasive procedures.[1] It is known to develop idiosyncratic skin reactions including irritant contact dermatitis. Irritant contact dermatitis is a localized inflammatory skin response. It results from the direct cytotoxic effect of irritants, both chemical and physical. The clinical manifestations of irritant contact dermatitis range from mild skin dryness and erythema to acute eczematous dermatitis and even skin necrosis (chemical burn).[2]

A twenty-year-old, primigravida with 37 weeks pregnancy was referred to our institute from a private hospital in view of eclampsia with history of 6-7 episodes of seizures at home. She had received loading dose of magnesium sulphate and was referred to our hospital. She was in a postictal phase and blood pressure was 170/100 mm of Hg. After initial stabilization and sending routine laboratory investigations, magnesium sulphate was continued by Zuspan’s regimen and tablet labetalol 200 mg BID was started in addition to α methyldopa QID and capsule nifedipine 10 mg QID. On abdominal examination, fetus seemed to have longitudinal lie and vertex presentation and hence pre-induction cervical ripening with intravaginal dinoprostone gel was done. She went into active labor, progressed rapidly and became fully dilated in 5 hours. Spontaneous rupture of membranes occurred. Per vaginal examination at this point revealed breech presentation and hence she was taken up for emergency cesarean section in view of breech presentation in labor.
On immediate examination of the neonate, there were no areas of hyperemia noted on the buttocks. The vital parameters and systemic examination of the neonate was within normal limits. However, after a few hours of birth, the mother noticed areas of mild hyperemia on the gluteal area of the baby, which soon became denuded as seen in the image. 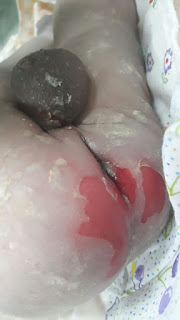 Figure 1. Superficial burns on the gluteal region of the neonate.

There were no other skin lesions. These were diagnosed as superficial chemical burns due to undiluted chlorhexidine solution. The burns were treated with local antibiotic cream and healed soon without scarring. There were neither maternal complaints of vaginal burning or irritation nor remarkable findings suggestive of vaginal burns.

The image shows superficial chemical burns associated with area of erythema and superficial blistering over both buttocks of the infant. Skin irritation is the most common reported adverse event after chlorhexidine-cetrimide exposure. Preterm infants have immature skin with ineffective epidermal barrier as compared to that of term infants and hence they are susceptible to skin damage and absorption of potentially harmful substances.[3] There have also been reports of skin burns and skin irritation in preterm infants less than 48 hours of age after exposure to aqueous-based as well as alcohol based chlorhexidine gluconate-cetrimide solutions. Hence saline rinsing after antisepsis is recommended to avoid the same.[4]
Chlorhexidine gluconate-cetrimide used in appropriate dilution can be safe for per vaginal examinations barring idiosyncratic skin reactions. In fact, it was considered standard of practice to use manual swabs with chlorhexidine solution 0.25 % for every vaginal examination before delivery and babies born during the intervention were also wiped with chlorhexidine wipes. This intervention was found to reduce the early neonatal and maternal post-partum infectious morbidities.[5] Vaginal chlorhexidine-cetrimide mechanical wipes resulted in statistically significant reduction of colonization of neonates with gram positive beta hemolytic streptococcus.[6] In under-resourced settings, chlorhexidine-cetrimide solution can be used to prevent maternal peripartum and neonatal infections from the normal vaginal flora.[7]
However, as per the latest recommendations routine vaginal cleansing with chlorhexidine during labor for the purpose of preventing postpartum infections of the mother and the neonate is no longer recommended even in women with Group B streptococcus infection or colonization. Moderate quality evidence supports the use of vaginal cleansing with povidone iodine immediately before cesarean section to reduce incidence of post-cesarean endometritis alone. The guideline development group suggested the use of manual swabs with diluted povidone iodine (1-10% w/v) for a contact time of 30 seconds in the vagina, immediately after urinary bladder catheterization. The neonatal implication of the above intervention was a transient increase in neonatal iodine levels as observed in neonatal thyroid screening.[8]

In light of recent evidence and guidelines, the use of inexpensive and readily available povidone iodine solution is replacing chlorhexidine cetrimide solution for vaginal swabbing.