Developmental anomalies of the mullerian duct system represent some of the most fascinating and challenging disorders that gynecologists encounter. This is a report of a normally menstruating adolescent girl who presented with acute abdominal pain aggravated during menses. On ultrasonography, she had a septate uterus with non-communicating unilateral (right-sided) hematometra, a very rare müllerian anomaly termed as Robert’s uterus; diagnosis was confirmed on magnetic resonance imaging (MRI). The patient underwent laparotomy with complete excision of the non-communicating hemiuterus and endometrial cavity with drainage of hematometra; she recovered completely and resumed painless menses. The case and relevant literature review are presented.

The reported incidence of mullerian duct anomalies (MDAs) is 0.1-3.5%.[1] The most commonly reported anomalies are septate, arcuate, didelphys, unicornuate, or hypoplastic uteri. The widely accepted American Fertility Society (AFS) classification organizes MDAs according to major uterine anatomic defect and allows for standardized reporting methods. Septate uterus (AFS Class V) is the most common, resulting from incomplete resorption of the medial septum after complete fusion of the mullerian ducts has occurred; variations exist like complete, partial and segmental. The complete septum extends from the fundal area to internal os and divides the endometrial cavity into 2 components and is often associated with a longitudinal vaginal septum. The most common presenting symptoms are dysmenorrhea, dyspareunia, primary or secondary infertility, pregnancy loss and obstetric complications.

A 20 years old unmarried girl, normally menstruating for 5 years, presented to emergency room with severe dysmenorrhea. On examination, her secondary sexual characters were normal. She had mild pallor, marked lower abdominal tenderness but no palpable lump, and normal external genitalia. On rectal examination, a bulky uterus was felt in midline, deviated to the right. Transabdominal and transperineal ultrasonography revealed a septate uterus with right sided hematometra with normal left endometrial cavity. MRI confirmed the diagnosis and clearly showed septate uterus with normal left-sided outflow tract with blind right cavity with septum till internal os and single cervix. There was no communication between the two cavities; there was no evidence of any renal anomaly. The noncommunicating horn was considered to be the cause of the patient's severe dysmenorrhea due to intracavitary retention of menstrual effluent. 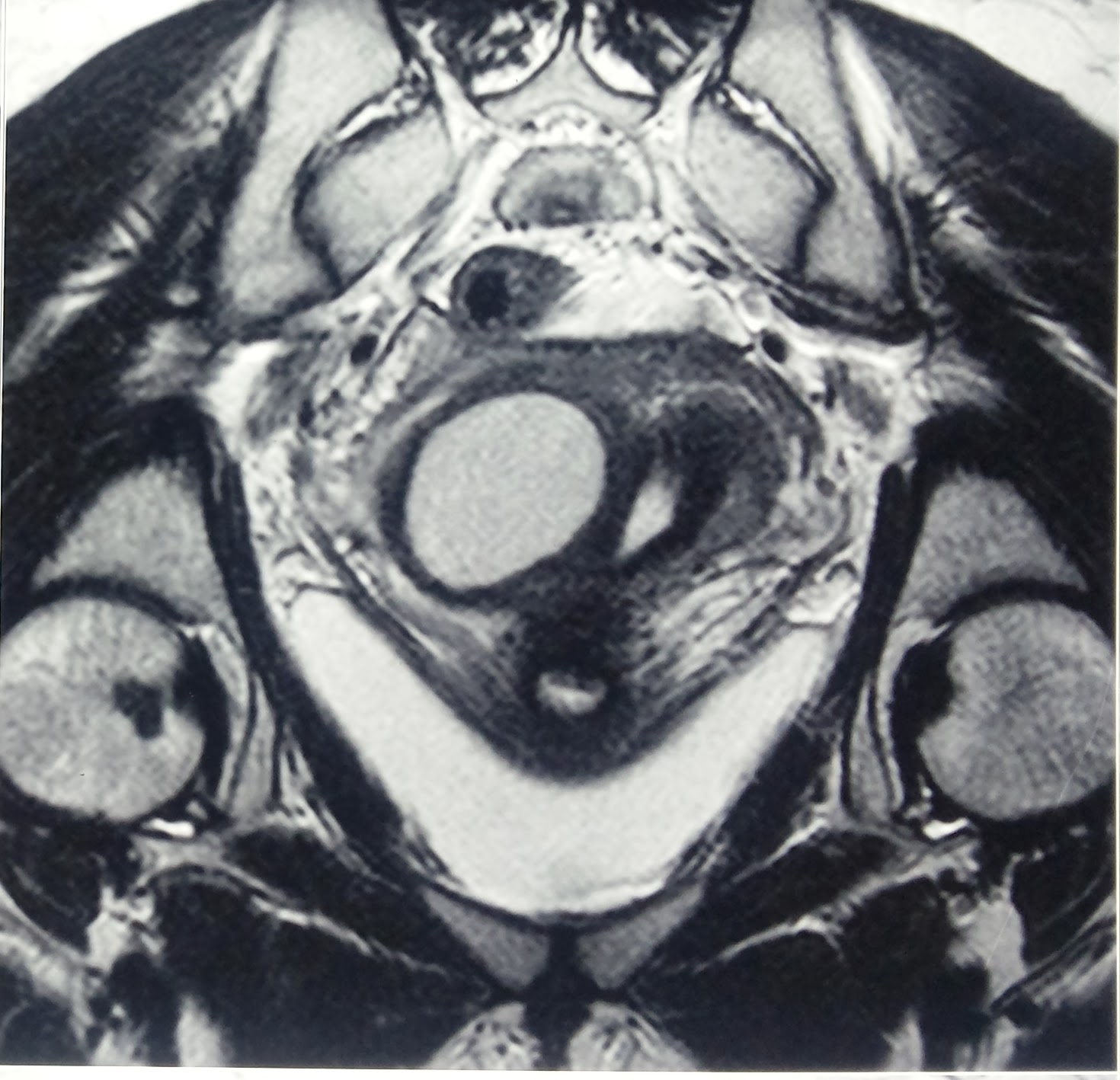 The patient underwent exploratory laparotomy. The uterus was bulky with normal fundal contour and well-developed left side, with a soft, bulging right side suggestive of hematometra. Though right adnexae were normal in appearance, the fallopian tube was not communicating with the right hemiuterus. An incision was taken over the right hemiuterus; anchovy sauce-like material of approximately 100 ml was drained. As the septum was reaching only till internal os, there was neither communication between lower extent of right hemiuterus and cervix below, nor with left-side cavity. Hence non-communicating blind right hemiuterus was excised completely with endometriectomy. The right round ligament was divided; the bladder pushed inferiorly, extent of incision was up to the internal os inferiorly and lateral to the midline septum, so as to preserve the normal functioning left hemiuterus. Intraoperative findings were consistent with preoperative diagnosis. Uterine incision was sutured in two layers using delayed absorbable sutures. 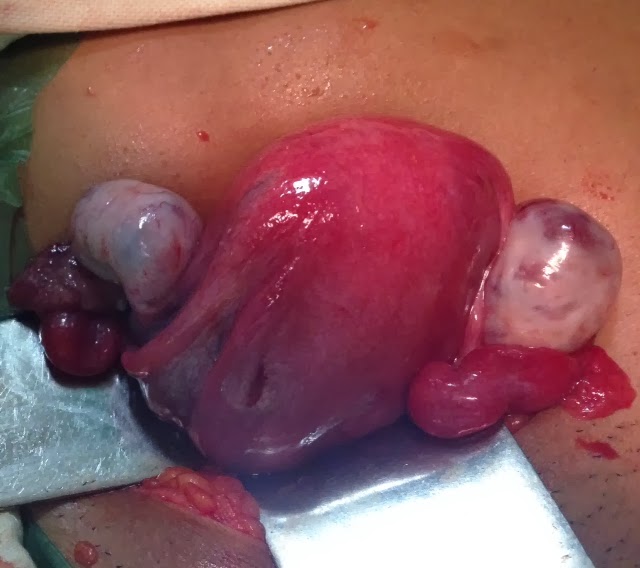 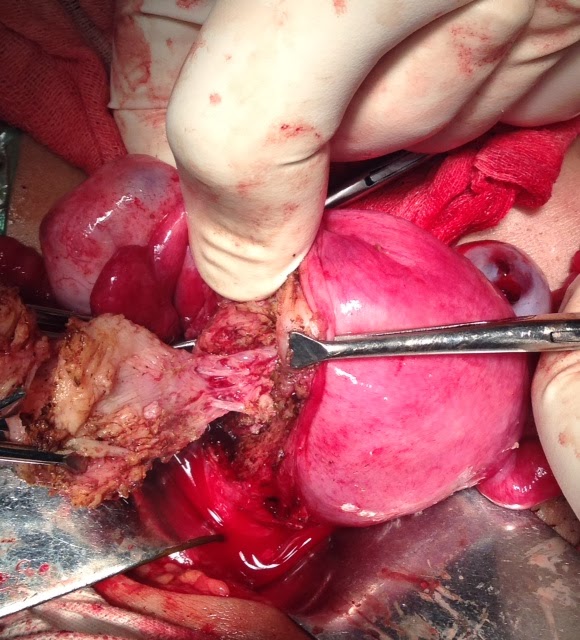 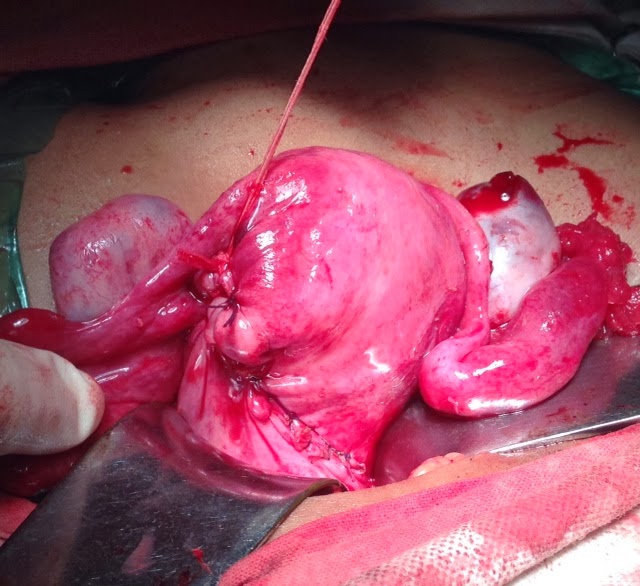 Figure 4: Uterus after excision of right hemiuterus and closure

Histopathological examination was consistent with hematometra. The patient’s postoperative recovery was uneventful with resumption of normal painless menses in the next cycle.

Robert’s uterus or asymmetric septate uterus is a rare variant of septate uterus, a unique congenital mullerian anomaly first reported by Robert in 1970[2]; so far very few cases have been reported in literature.[3,4,5] This is characterized by a complete septum, non-communicating hemiuteri with one blind horn causing hematometra and one communicating hemiuterus with single cervix and a normal extrauterine morphology. Patients usually present in postmenarcheal period with unilateral hematometra causing dysmenorrhea. The modalities for diagnosis are ultrasonography and MRI while hysterosalpingography, hysteroscopy, and laparoscopy are useful especially in infertility cases. MRI provides excellent tissue characterization helping in reliably differentiating septate from bicornuate uterus and also in diagnosing asymmetric septate uterus.[6,7]
Surgery can be done by open or minimally invasive method, definitive surgery involves drainage of hematometra and excision of blind non-communicating hemiuterus taking care to maintain integrity of functional communicating hemiuterus and cervix.[8, 9]
In order to avoid inappropriate management, gynecologists should be aware of this rare entity while evaluating cases of severe dysmenorrhea in previously normal menstruating young girls. Prompt early diagnosis and surgical correction are essential to avoid future morbidity due to endometriosis. Few cases have reported successful pregnancy after endometriectomy in these cases.[10]