Cervical fibroids are difficult to diagnose and manage surgically. Management depends upon presentation and desire of fertility. Myomectomy for preservation of fertility is difficult in cases of giant as well as cervical fibroid. A 27 year-old unmarried girl presented with hemorrhagic shock, menorrhagia and giant cervical fibroid. This case illustrates surgical difficulties especially when uterine conservation is needed, emphasizing the need to follow principles of myomectomy.

Though fibroids are the commonest benign tumors of the uterus, cervical fibroids constitute only 1-2% of all fibroids. They are classified as anterior, posterior, lateral and central depending on their location. They may remain asymptomatic till they enlarge and present with menorrhagia, dysmenorrhea or pressure symptoms, mainly bladder related; diagnosis is often missed prior to surgery. [1] Pelvic anatomy is disturbed especially in interstitial type of cervical fibroid; surgery is confounded by a pulled up, stretched bladder and displaced ureters, increasing the risk of injury. [2] Management is usually surgical as medical and other interventional treatments like uterine artery embolization (UAE) and high intensity focused ultrasound (HIFU) usually fail by virtue of size and location of fibroids; myomectomy is indicated for fertility conservation.

A 27 year old unmarried girl presented with hemorrhagic shock and active vaginal bleeding. She had dysmenorrhea and severe menorrhagia since one year, increased in intensity over last 6 months. There were no urinary complaints. She was previously diagnosed on MRI with single giant fibroid (20 x 20cm) not amenable to HIFU hence was advised hysterectomy elsewhere; however in view of her young age and unmarried status, she and her parents refused surgery. Subsequently, she did not take any treatment.
On admission, she had tachycardia (110/min), hypotension (blood pressure 90/60mm Hg) and severe pallor. Abdominal examination revealed a firm, smooth, nontender, relatively immobile mass arising from pelvis corresponding to 32 -34 weeks’ size uterus. She was stabilized and managed conservatively with 4 units of blood (admission hemoglobin 4g %), intravenous tranexamic acid and injection leuprolide acetate 3.25mg intramuscularly; surgery was deferred in view of severe anemia. She was discharged and asked to follow-up on completion of oral iron therapy and 3 doses of injection leuprolide.
However, she presented in the next cycle with similar complaints; uterine size had only slightly reduced (30 weeks). Hemoglobin was 10.6g %, repeat ultrasound suggested huge intramural fibroid of size 20 x 15cm, pushing uterus towards right, with bilateral hydronephrosis and hydroureters. Hence myomectomy with preoperative ureteric stenting was advised; she refused stenting but after counseling, agreed to surgery.
Abdomen was opened through midline vertical incision, extended supraumbilically. In situ findings: normal-sized uterine fundus sitting on top of giant 20x18cm central cervical fibroid, the classically described lantern on top of the dome of St Paul’s cathedral. Uterine fundus was deviated to the right side, bulk of the growth extended to the left broad ligament, and bilateral adnexae were stretched over fibroid with urinary bladder pulled upward. Uterovesical fold of peritoneum was opened and bladder was mobilized inferiorly. Injection vasopressin 20units in 20ml normal saline was injected in the region of uterine arteries with due care. Vertical incision of approximately 12-15cm was taken over anterior wall of fibroid (4-5cm inferior to fundus). Giant myoma weighing 2.5kg was enucleated easily. Anatomy was identified: entire cervix replaced by myoma, uterine body with anteriorly opened cavity and intact posterior wall was seen on superolateral aspect of a huge myoma bed, with only well-defined intact external os in the base of bed. Both uterus and cervical os were held with Babcock forceps. Hemostasis was achieved by obliterating the myoma bed with series of figure-eight and purse-string sutures using No. 1 polygalactin 910; redundant myoma wall was excised. Reanastomosis of uterine cavity and external os was begun on posterior inner wall, with sutures of No. 1 polyglactin taken anteroposteriorly (vertically) and circumferentially. Pediatric Foley catheter No. 10 was inserted as a stent in the uterine cavity, and bulb was inflated with 5ml normal saline. Open end of the catheter was then inserted in a retrograde manner though external os and brought out into vagina. Circumferential anastomosing sutures were carried anteriorly over the stent taking care not to pierce the catheter. Reinforcing sutures were taken and complete anastomosis was achieved. Serosa was closed with No. 2-0 polyglactin 910. Bilateral ureters were traced and found normal. 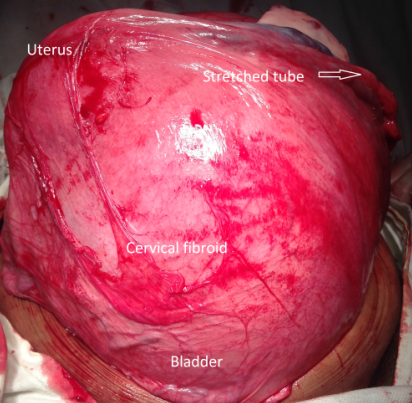 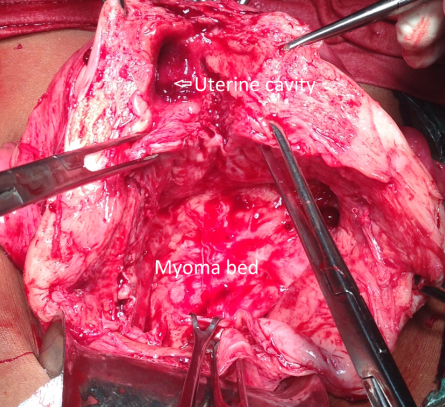 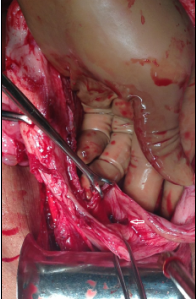 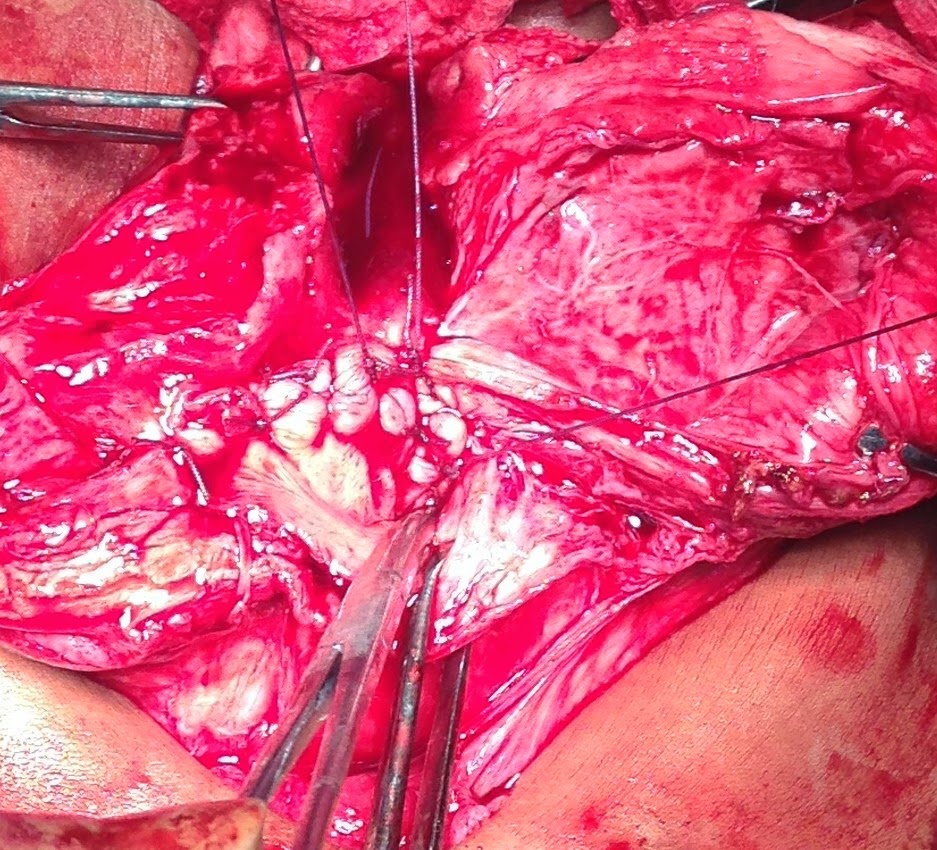 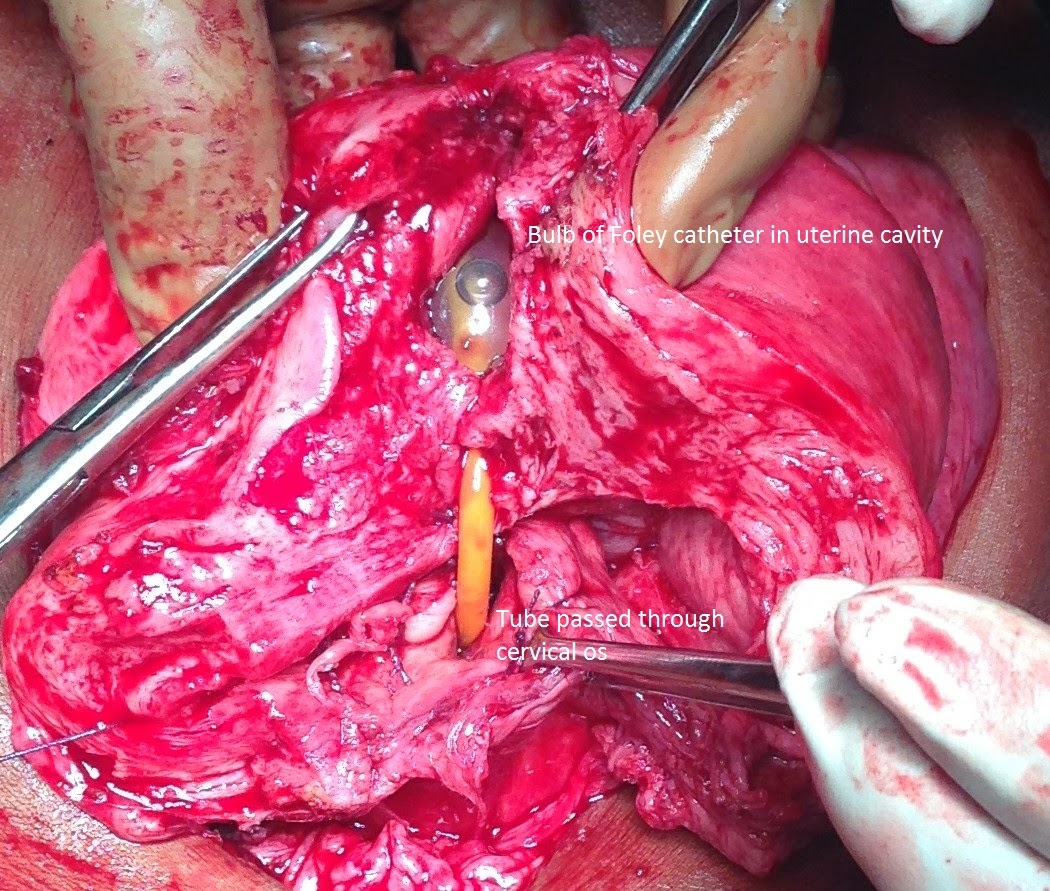 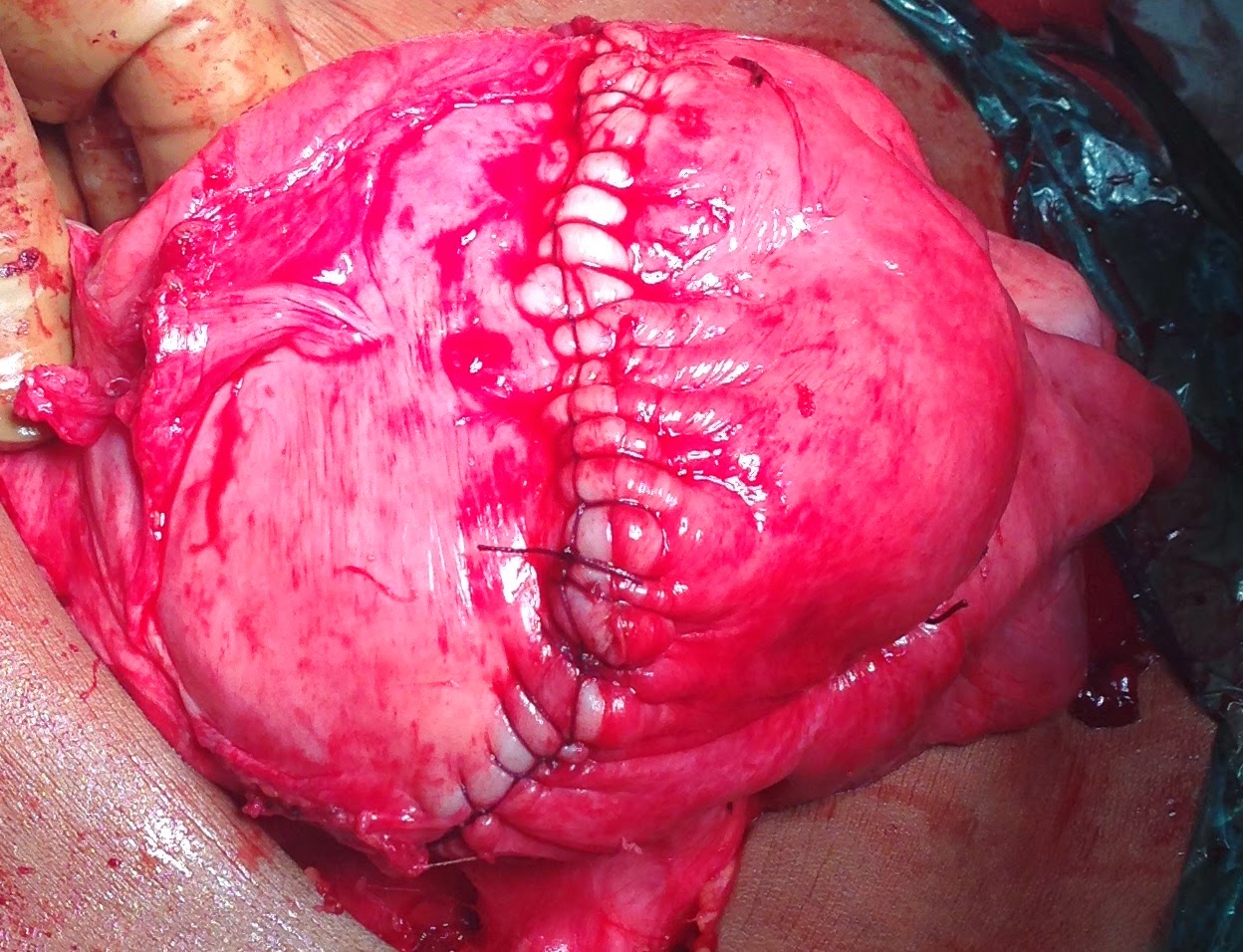 Postoperative period was uneventful; ultrasound examination on post-operative day 6 showed catheter in place, with a small collection lateral to cervix. Patient was discharged on day 10 with catheter in situ which was removed easily on day 21. Repeat USG showed resolving collection with reanastomosed uterus. Patient resumed normal menses 6 weeks after the procedure, without menorrhagia or dysmenorrhoea. Histopathology revealed degenerated myoma. Patient is on oral contraceptive pills and regular follow-up. 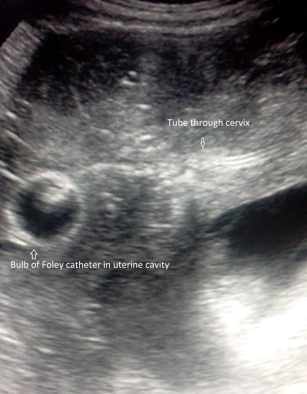 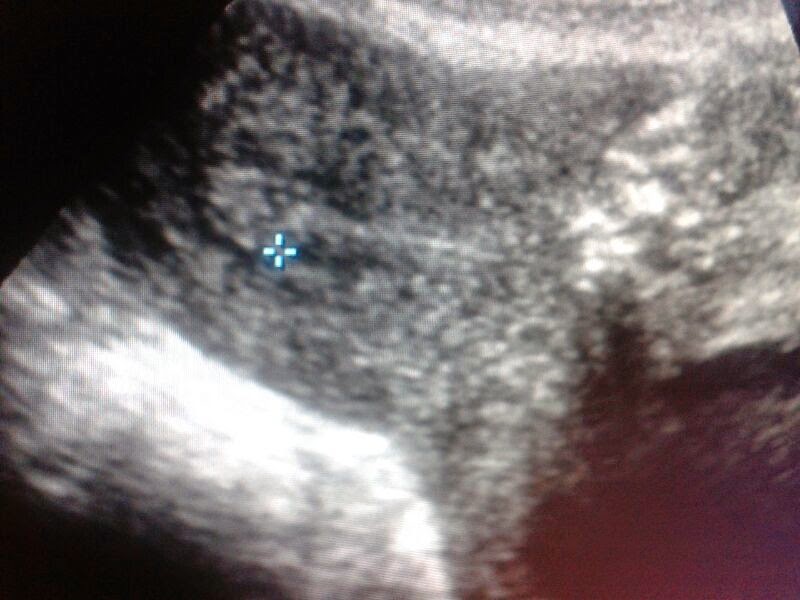 Myomectomy for fertility preservation can be challenging in cases of giant and cervical fibroids.  Preoperatively, GnRH analogues may reduce both the size and vascularity, and thus pre and intraoperative blood loss. [2] UAE reduces blood loss as well of need of surgery in fibroids, however data related to future fertility is unclear. [3]
Very few cases have been reported for giant cervical fibroid. Hysterectomy is usually resorted to and reconstruction of cervix and uterus is a rarity. [4, 5, 6] Surgical reanastomosis requires thorough knowledge of anatomy and is technically challenging. The technique used by us has not been described earlier. Integrity of utero-cervical anastomosis was confirmed with restoration of patient’s menstrual function; however her future reproductive function is still uncertain.