Uterine fibroids are the commonest pelvic tumors over the age of 30 years, as more women are delaying childbearing until their late thirties which is the time for the greatest risk of myoma growth. A 7 × 6 cm submucosal fibroid was incidentally found during caesarean section after the delivery of the baby, on the inner aspect of the lower uterine segment at the incision site. In view of difficulty in suturing of the uterine incision, myomectomy was performed.

Uterine leiomyoma are the commonest type of benign tumor of female reproductive tract during the reproductive age group with an incidence ranging from 5.4 to 7.7%.[1,2]. This is associated with increased amount of circulating estrogen.[2] The incidence of uterine myoma during pregnancy has been reported to be2%.[3]  The blood loss during caesarean myomectomy is usually severe as the size and blood supply to the myoma are increased during pregnancy. Traditionally obstetricians avoided myomectomy during cesarean section due to severe hemorrhage often necessitating hysterectomy and also it lead to increase in postoperative morbidity. In most cases it is wise to defer myomectomy until the uterus has completely involuted, preferably for 6 months. Uterine involution causes ischemia and vascular remodeling within the myometrium which cause shrinkage in the size of uterine myoma. A few previous reports have recently suggested that cesarean myomectomy is a safe surgical procedure, provided   it is performed in carefully selected patients and also improves subsequent pregnancy outcomes.

A 35 years old women, second gravida with previous lower segment caesarean section was admitted at 39 weeks 2 days of gestation in view of false labor.  Her vital parameters were stable and systemic examination revealed no abnormality. On abdominal examination uterus was full term with fetus in oblique lie with head in left iliac fossa, with minimal uterine activity and fetal heart sounds were 140 beats per minute and were regular. On vaginal examination cervix was closed, uneffaced and posterior. After two days patient went into spontaneous labor and hence decision for emergency lower segment caesarean section was taken in view of previous caesarean section with fetus in oblique lie. Baby was delivered by vertex presentation and there was no difficulty in extraction. A submucosal fibroid of size 7×6 cm was incidentally noted on the inner aspect of the lower uterine segment at the incision site, more towards the right uterine angle. In view of difficulty in approximation of upper and lower uterine segment, decision for myomectomy was taken. A plane was created between the myometrium and myoma, and it was enucleated with electrocautery in order to reduce the bleeding. Multiple hemostatic sutures were taken in the myoma bed with polyglactin910 no.1 and hemostasis achieved. This was followed by closure of the uterine incision. After the delivery of the baby, oxytocin infusion was started and was continued for 12 hours. Broad spectrum antibiotics and analgesics were given in the postoperative period. There was no significant difference observed in the intraoperative hemorrhage and postoperative pain and hospital stay in this patient and other post cesarean section patients. 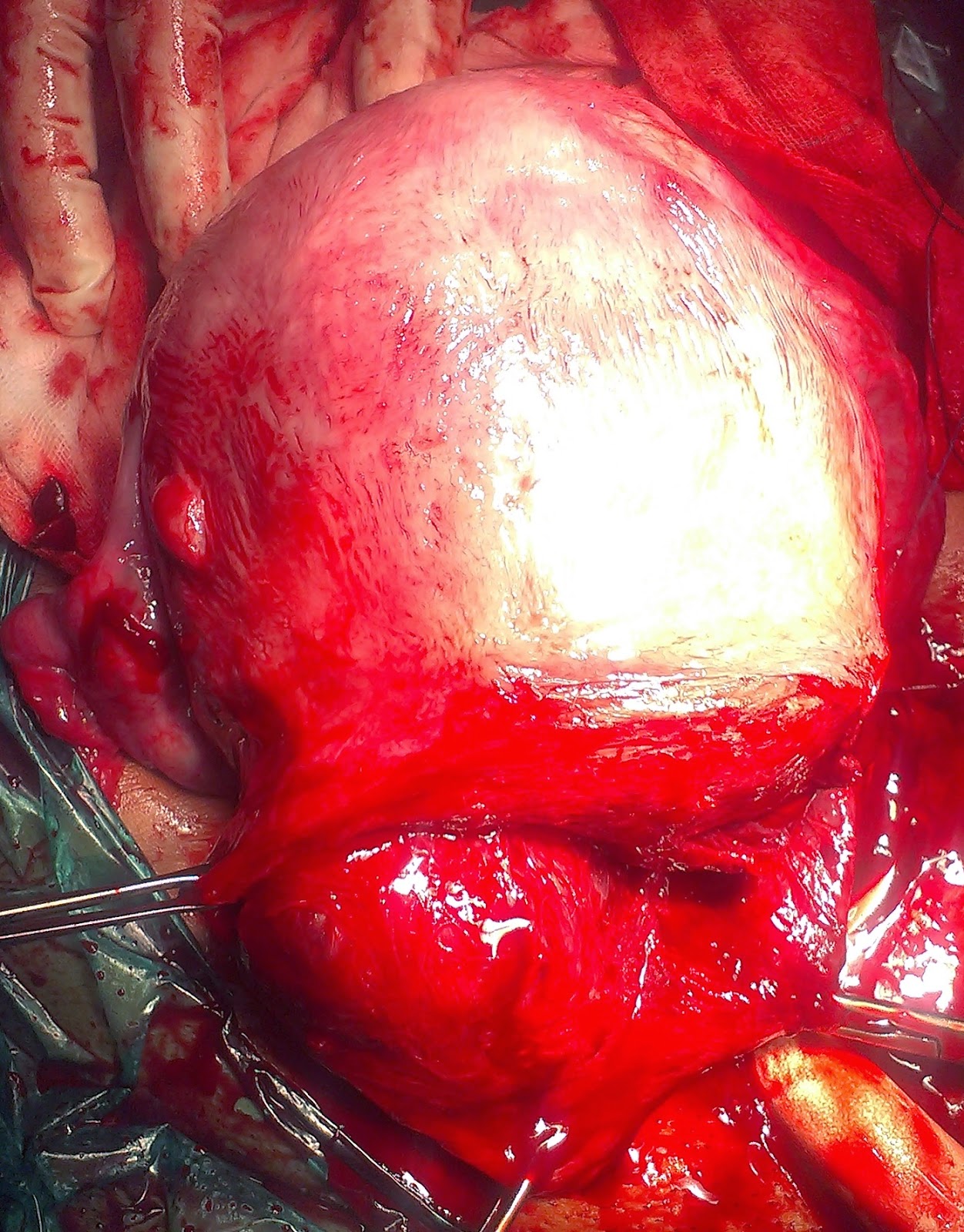 Figure 50.1. Intraoperative finding showing 7×6 cm submucosal myoma situated at the inner aspect of the lower uterine segment at the incision site near the left angle. 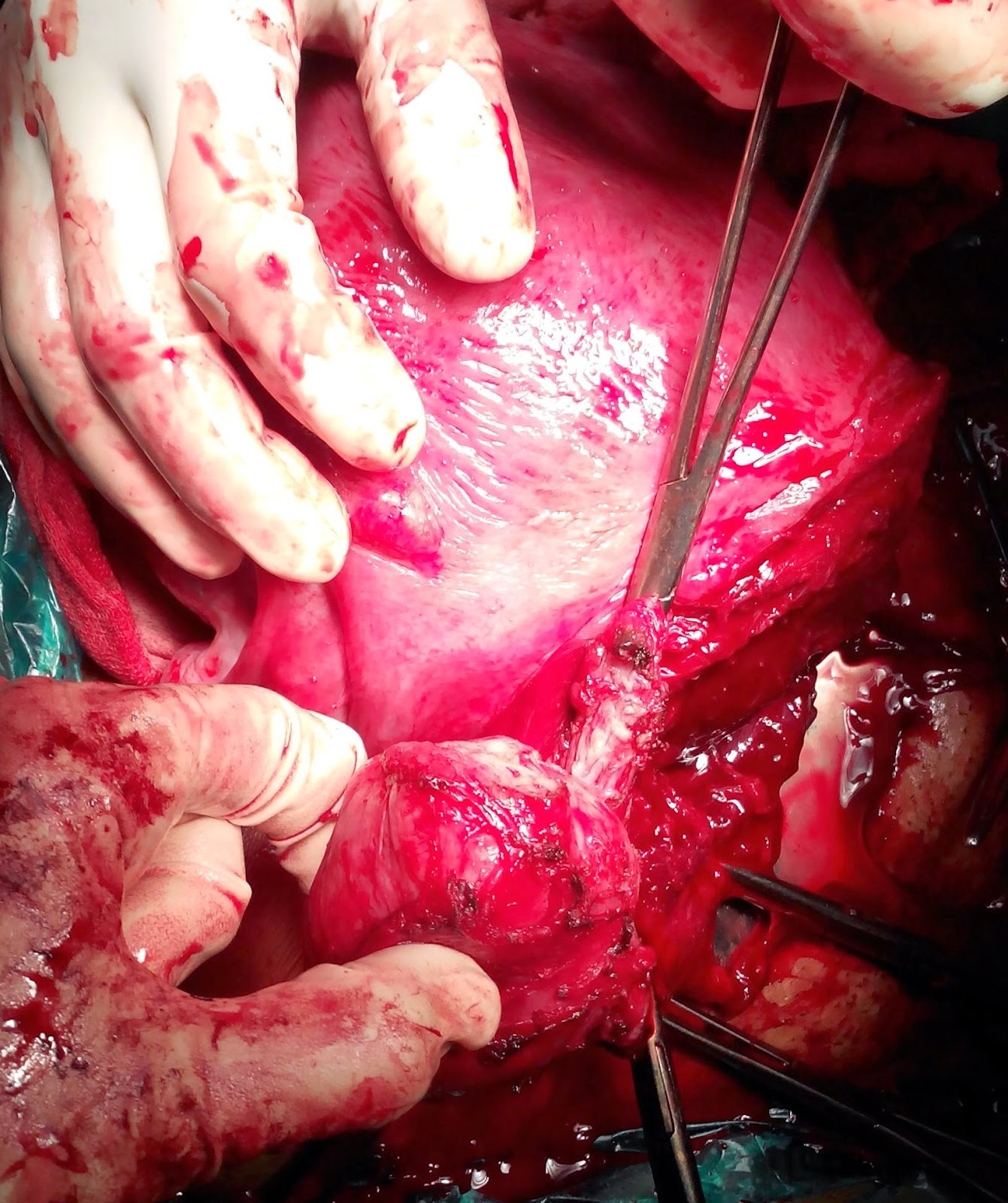 Figure 50.2. Myoma enucleated with electrocautery by creating a plane between myoma and the uterine myometrium. 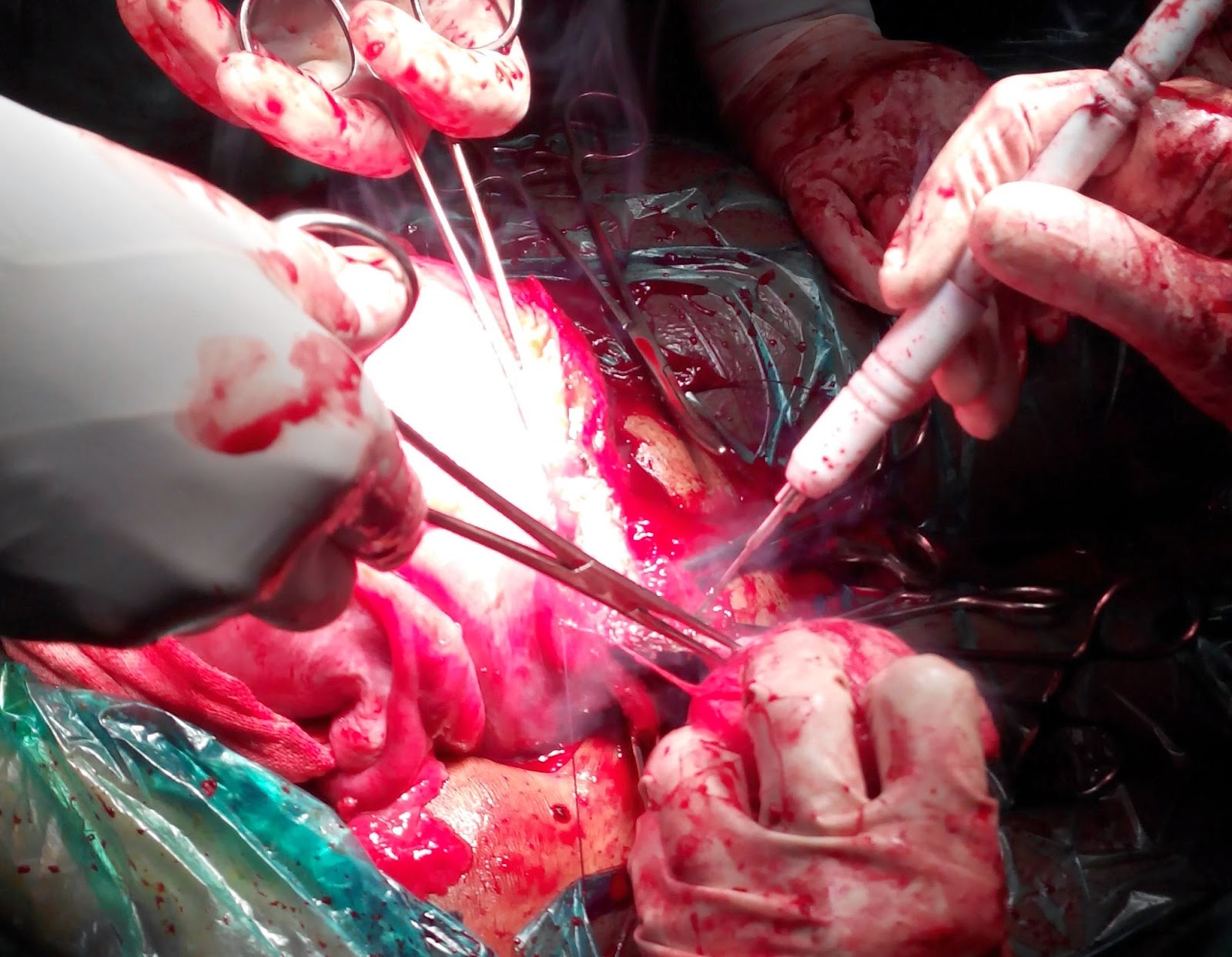 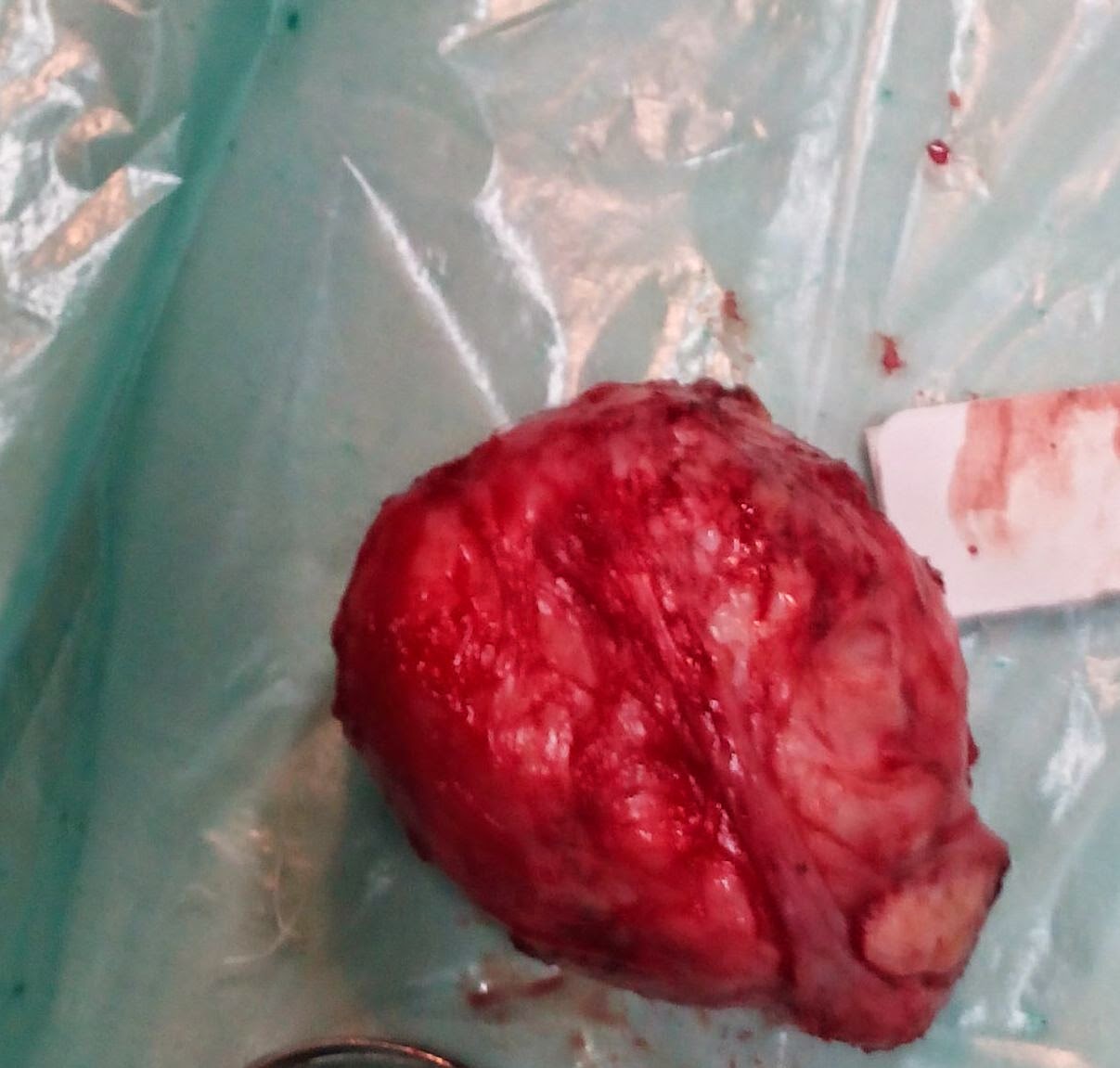 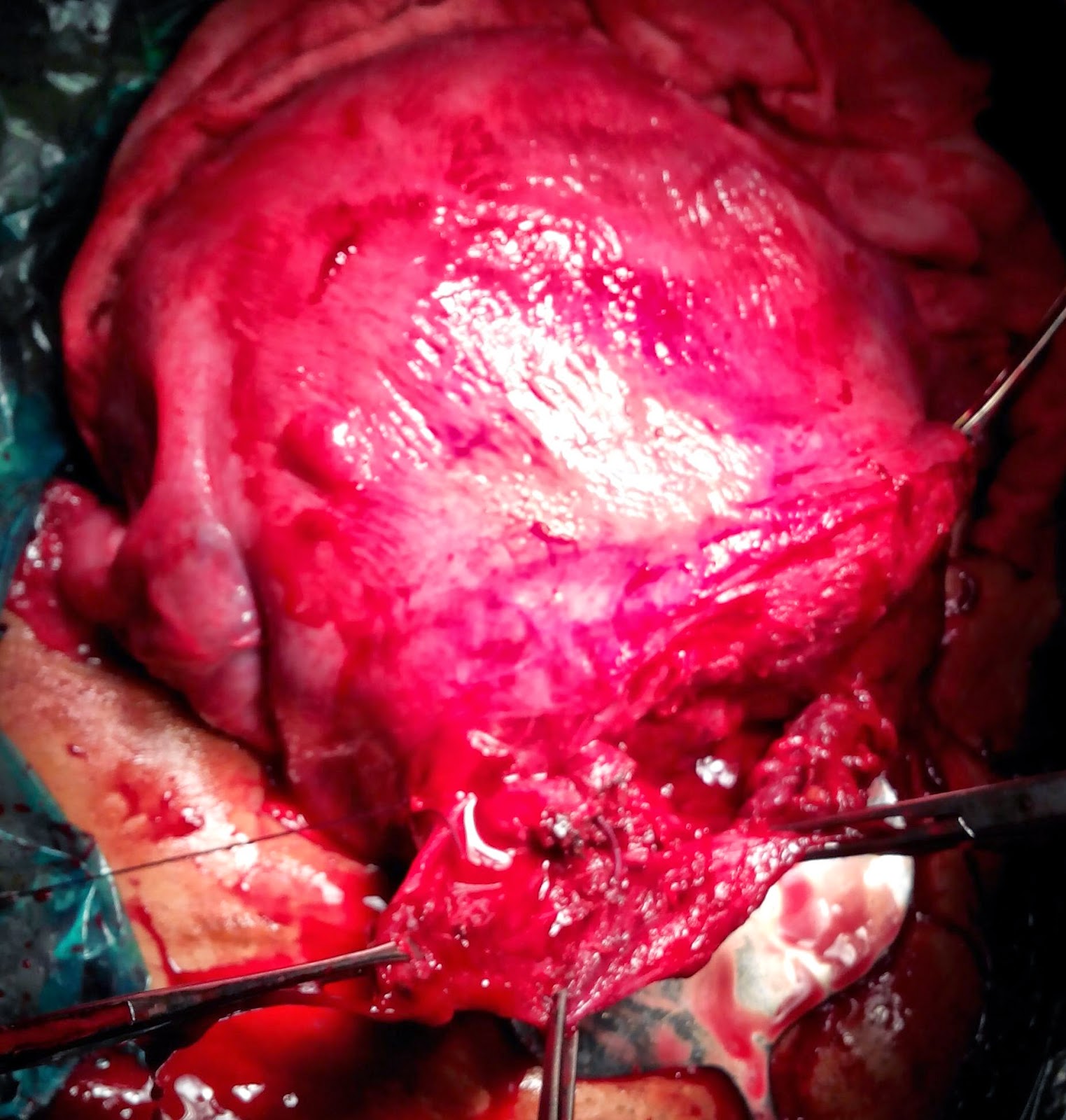 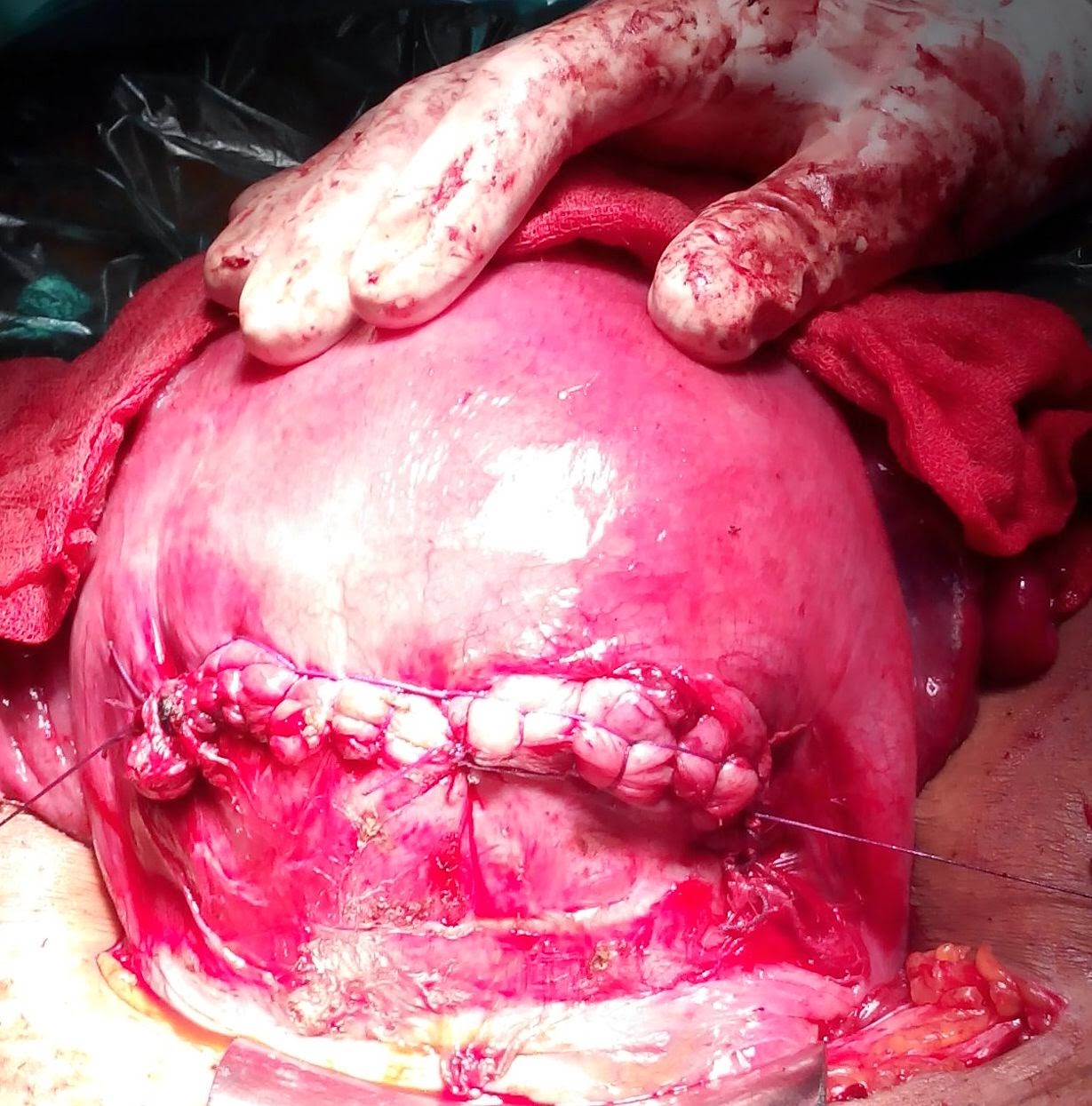 Myomectomy is rarely performed during an ongoing pregnancy because of the risk of uncontrolled hemorrhage which may require hysterectomy. Although the majority of pregnant women with fibroids are usually asymptomatic, and most affected pregnancies will be uneventful, serious complications can occur during pregnancy leading to poor outcomes.  Complications are reported in only 10% of the pregnant women.[4] Pregnancy with coexisting fibroids is associated with  increased incidence of first trimester abortions, pressure symptoms, pain due to red or carneous degeneration , torsion of a pedunculated fibroid, malpresentations, dysfunctional labor, preterm labor, preterm rupture of membranes, placental abruption, obstructed labor from a cervical or lower segment fibroid ,retained placenta, subinvolution of the uterus and postpartum hemorrhage.[5] Less common complications like urinary retention in the first trimester, fetal limb anomalies and head deformities due to compression , hypercalcemia, uterine inversion and acute renal failure have also been reported in the literature.[5] The gold standard for initial management has traditionally been conservative treatment for pain symptoms. The treatment options during pregnancy depends on multiple factors like size of the myoma, location and position of the tumor relative to the lower uterine segment, proximity to vessels, severity of symptoms and patients desire for nonconservative treatment. Myomas near the fundus and ostia of the tubes should be avoided to prevent adhesions and future fertility problems.
Myomectomy during caesarean section cannot be avoided during varied presentation of the myoma such as  severe abdominal pain due to torsion of pedunculated subserous myomas, red degeneration not responding to medical treatment, unusual intraoperative appearance of the tumor and pedunculated uterine fibroids due to increase risk of torsion in future. Other indications are patients in whom fibroids are obstructing the lower uterine segment causing difficulty in baby delivery and with uterine incision closure as was seen in our case.[6,7] The various techniques described to reduce bleeding during caesarean myomectomy includes tourniquet application through avascular area of broad ligament to compress both uterine arteries, bilateral uterine artery ligation, pericervical tourniquet application,  electrocautery and oxytocin infusion after the delivery of the baby.[8]
Myomectomy done in properly selected patients, during caesarean deliveries, prevents the added morbidity of a separate procedure either laparotomy or laparoscopy for removal of fibroids in future, adhesion formation, justifies the cost effectiveness and also prevents complications related to anesthesia.
In conclusion, we do not always recommend myomectomy during cesarean section, but may be performed in unavoidable conditions like in our present case. With proper patient selection, adequate experience, and effective haemostatic measures, the procedure does not appear as hazardous as was initially thought.