A case of  a huge serous cystadenoma incidentally detected during pregnancy followed by a full term normal vaginal delivery and undergoing torsion 7 weeks  after parturition is presented. Exploratory laparotomy revealed hemorrhagic necrosis due to torsion of the huge serous right ovarian cyst.

Adnexal masses occur in 1 out of 200 pregnancies.  Commonest benign adnexal mass is a cystic teratoma followed by a cystadenoma.[1] Serous cystadenomas can grow enormously and fill the entire abdominal cavity as seen in the present case.  Torsion and rupture of the cyst are the common and dreaded complications. Torsion usually occurs either in the late first trimester or second trimester of pregnancy or in puerperium as the ovarian tumor becomes an abdominal organ and has space to freely move and tip over.  Rupture of the cyst can be spontaneous or following increased intracystic pressure due to torsion. Here we present a case of a huge serous cystadenoma incidentally detected during pregnancy followed by a full term normal vaginal delivery and undergoing torsion 7 weeks  after parturition.

A 24 year old married woman who had delivered 50 days ago, presented with complaints of abdominal distension, severe stabbing pain in right iliac fossa for 4 hours radiating to back and accompanied with one episode of vomiting. Ultrasonography (USG) done in her 6th month of pregnancy had diagnosed a large benign cystic lesion of the right ovary. The cyst had gradually increased in size but was asymptomatic and the patient had an uncomplicated  normal delivery in a private hospital. From delivery to presentation in the casualty patient experienced several episodes of mild to moderate dull aching pain in the lower abdomen. On presentation, general condition was fair. The patient’s temperature was normal, pulse was regular, 90 beats per minute, blood pressure was 110/70 mm of Hg, and there was no pallor, icterus or edema. Systemic examination was normal. On abdominal examination a 34 weeks’ size, cystic, tender, mobile mass arising from pelvis was felt. There was no guarding or rigidity. On bimanual pelvic examination the lower end of the cyst could not be felt, the uterus was anteverted and normal sized, right fornix was tender and left fornix was clear but non tender An USG was done. It showed a pelvic anechoic mass extending towards the upper abdomen of size 20.5 x 16.4 x 14.8 cm with internal echoes, debris and septations in the right adnexa arising from the right ovary and extending up to the right hypochondrium; most likely a right ovarian mucinous cystadenoma. The left ovary and uterus were normal. Doppler study revealed a right ovarian cyst with peripheral compressed follicles with twisting of the vascular pedicle and presence of Whirlpool sign. A computerized tomography (CT) confirmed the diagnosis, but did not reveal any evidence of torsion. Reports of tumor marker tests were CEA: 1.38 ng/ml, CA 125: 33.2 U/ml and CA 19: 5.78 mcg/ml. All were within normal range. Torsion of the ovarian mass or hemorrhage in the ovarian mass was provisionally diagnosed. Her hemoglobin was 11.7 gm%, white blood cell count was 14,300/mm3, blood urea nitrogen, serum creatinine and serum electrolytes were normal. An exploratory laparotomy was done under general anesthesia. Abdomen was opened through an infraumblical incision. No ascites was seen. Peritoneal fluid saline washings were sent for cytology. A large dark, cyanosed, blackish brown, hemorrhagic ovarian cyst was seen filling the entire peritoneal cavity. Incision was extended cephalad to deliver the cyst. A 23 x 20 x 20 cm cyst with smooth surface arising from the right ovary and having two and half circle clockwise torsion of pedicle was noted as seen in Figure 1. The pedicle was untwisted but the color did not improve. A right salpingo-oophorectomy was done. The uterus, left ovary and fallopian tube were normal. Liver, spleen and bowels were normal. The cyst weighed 3.75 kg. On cut section, the cyst did not show any solid component or papillary excrescences. It was bilocular with septations and thick congested walls. Several rubbery blood clots blackish in color were seen. Approximately 400 ml of brownish black fluid was drained from the cyst. The patient had an uneventful postoperative recovery and was discharged on 5th day. Peritoneal fluid cytology was negative for malignant cells.  Histopathology reported a bilocular cyst with brown gelatinous material, thick congested smooth walls with flattened to cuboidal epithelium resting on fibro-collagenous stroma with areas of recent and old hemorrhages. The final diagnosis was  serous cystadenoma with hemorrhagic necrosis due to torsion. 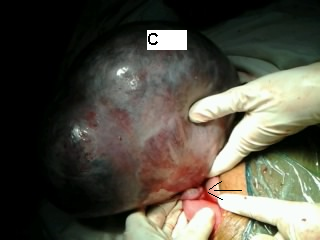 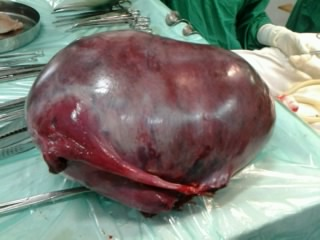 Ovarian torsion is twisting of ovary alone or more often along with its salpinx.  This twisting initially decreases its venous drainage. This results in increased pressure which on exceeding the arterial pressure will cause necrosis and infarction of the ovary by interrupting the arterial flow.[2]
Asymmetrical enlargement of the ovary occurs due to the cyst resulting in a weight imbalance causing the ovary to topple over. This twists its pedicle along the long axis of its salpinx.[2] Ovarian cysts with sizes ranging from 6 to 8 cm have the highest chances of undergoing torsion. However, in our patient a tumor with a diameter of 20 cm rotated on its axis. Such large tumors have space in the abdominal cavity during puerperium due to the lax abdominal wall. Our patient had all the typical presentation of an ovarian torsion. She had sudden onset of severe, sharp stabbing, and unilateral lower abdominal pain worsening intermittently over many hours. She had no nausea and vomiting that occurs in 70% of such patients. She had history of repeated episodes of abdominal pain that can be attributed to partial spontaneously resolving torsion. Temperature elevation is seen as the ovary becomes necrotic.[3] Color Doppler USG is the investigation of choice to evaluate  adnexal torsion. The  physiologic and morphologic changes that result due to impaired blood flow in a  twisted ovary are seen on Doppler.[4,5]  Normal Doppler findings do not exclude an adnexal torsion.  CT and magnetic resonance imaging are additional diagnostic techniques when USG findings are non diagnostic. Torsion of an ovarian cyst is a surgical emergency warranting an operative laparoscopy or laparotomy. Laparoscopic gynecologic surgery is safe in first trimester of pregnancy.[6] Laparoscopy  has also been used for removal of very large serous cystadenomas in advanced pregnancy[7]. Our patient should have undergone an exploratory laparotomy in the second trimester of pregnancy when the cyst was diagnosed or immediately after delivery in the puerperal period. The delay resulted in growth of the cyst, torsion, ischemic infarction and loss of an endocrine organ  in a young woman in the early 3rd decade of her life. This line of management is well documented in literature.[8]

With increasing use of USG,  ovarian cysts with pregnancy are easily detected. All ovarian cysts during pregnancy should be followed by USG.  If cysts fail to regress or they grow, surgical intervention is required. This can certainly prevent complications like torsion after delivery when its incidence is high due to involution of the uterus. Moreover presentation of ovarian torsion can be misleading. Even investigations like color Doppler and CT scan have diagnostic fallacies. High vigilance, early detection and prompt action can avoid tragic consequences.