A successful outcome of pregnancy with accessory spleen torsion at 14 weeks of gestation that required an exploratory laparotomy in the antenatal period is being presented. Pregnancy was carried till 37 weeks of gestation and an elective LSCS was done as the patient had undergone previous two LSCS.

Accessory spleen is a rare cause of acute abdomen. Accessory spleen was found in 10-15% of autopsy series accidentally.[1] Most of the accessory spleen are asymptomatic, and become problematic only if they get infected, undergo torsion, or necrosis. Most of them present in children. No records were found indicating their presentation and diagnosis in pregnancy on a pubmed, medline and google search. Accessory splenic torsion that occurred at 14 weeks of gestation was treated by exploratory laparotomy and excision of the gangrenous spleen. The pregnancy was continued till term successfully.

A 26-year-old G3P2L2, patient with previous two LSCS was posted for elective LSCS and tubectomy at 37 weeks of gestation. Patient delivered a male baby of 2.688 kg, appropriate for gestational age with Apgar score of 9/10.

The patient presented to the emergency room at 14 weeks of gestation with the complaints of acute onset pain in abdomen with pain originating in the left lumbar region and radiating to the back. The pain episode was preceded by one episode of vomiting. The patient had come with an ultrasonography scan (USG) from a private practitioner, suggestive of left psoas abscess. On examination, general and systemic examination was within normal limits. On abdominal examination, uterus of 16 weeks size was palpable; tenderness in left iliac fossa with minimal guarding was elicited. There was no rigidity. Ill-defined fullness was present in the left iliac fossa. On speculum examination, creamy, purulent, non-foul smelling, profuse discharge was seen. Cervix was high up. No fistulous tract or opening was seen in any of the fornices. Sterile swabs were collected and sent for smear and culture. On bimanual pelvic examination, uterus was soft, about 14 weeks in size, deviated to right, os was closed, but cervix was short. No cervical motion tenderness could be elicited. No mass/ cyst was felt in the left fornix. Vagina was not warm. On rectal examination, no mass or collection was felt. Patient underwent a repeat USG scan that was suggestive of a hemorrhagic left ovarian cyst of 9.6 x 6.8 cm, without any vascularity. Due to discrepancy of clinical examination and imaging studies, a magnetic resonance imaging (MRI) for the mass was done. The MRI report was suggestive of a well-defined homogeneous, intraperitoneal mass of size 9.3 x 5.6 x 6.1 cm in the left lumbar region, which was isointense with the spleen. The lesion had a pedicle arising from its lateral aspect just beneath the parietal wall. The pedicle showed fat stranding, up to the splenic vein. Vascular pedicle appeared twisted. MRA (Magnetic Resonance Arteriogram) and MRV (Magnetic Resonance Venogram) revealed no flow in the pedicle, which was suggestive of accessory splenic torsion. Smear did not grow any AFB, bacteria or candida. The patient underwent exploratory laparotomy under general anesthesia. The anesthetist took adequate care regarding adequate oxygenation and vigilant intraoperative monitoring was done. Intra-operatively findings showed an accessory spleen in the left lumbar region with flimsy adhesions to the small bowel loops and the omentum. There was torsion of its pedicle, whose blood supply originated from the splenic artery. There was another native spleen, normal in position and blood supply. Remaining abdominal and pelvic structures were normal. Uterus and adnexae were not handled during the surgery. Patient had an uneventful post-operative stay in the hospital and was discharged on day 5 of the surgery. 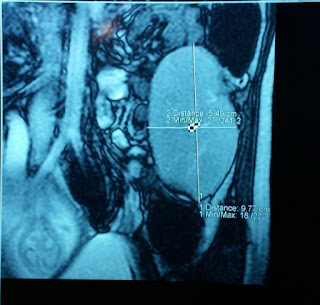 Figure 1. MRI showing the torsion of the accessory spleen 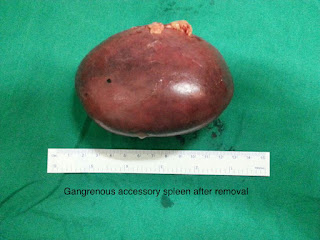 Patient had a regular ANC follow up and care. Progesterone support was given in the form of weekly intramuscular injection of 500 mg of Hydroxyprogesterone, till 37 weeks of gestation. The patient had threatened preterm labor at 33 and 35 weeks of gestation, and she was admitted. Injection Dexamethasone 6mg 12 hourly for 4 doses were given during the first episode. Tocolysis was given with oral Nifedipine 20 mg followed by Nifedipine sustained release 10 mg 12 hourly for 7 days. Urine routine microscopy was within normal limits, urine culture report showed no growth, high cervical swab showed no growth. Patient was conservatively managed and then discharged after 48 hours of observation both the times. Patient underwent an elective LSCS with tubal ligation for previous two LSCS, at 37 completed weeks of gestation. Antibiotics were administered perioperatively as per hospital infection policy. During the LSCS, the scar of the previous LSCS was thinned out, no evidence of dehiscence or rupture was seen. The uterus was a bicornuate uterus. Bilateral adnexa were normal. Bilateral kidneys were palpated. They were normal. The upper abdomen was normal. LSCS surgery was uneventful, and patient tolerated the procedure and anesthesia well. Post-operative stay in the hospital was uneventful. Patient was discharged on Day 5 of surgery. Delayed suture removal was done on day 14. Suture line was healthy. 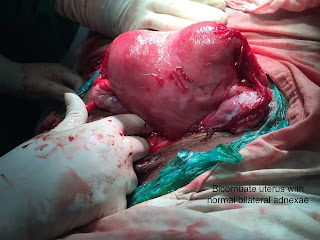 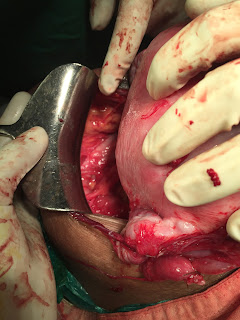 The most common symptom of torsion of accessory spleen is presentation with acute abdomen, severe abdominal pain originating in the left lumbar region, radiating to the back. The cause of the pain is the necrosis of the splenic tissue. The patient had come with an outside ultrasonography suggestive of left psoas abscess with acute abdomen. A repeat ultrasound was done, which was suggestive of left ovarian cyst, without any vascular supply. Due to unsatisfactory report of ultrasound examination and discrepancy in clinical examination and ultrasound findings, an MRI was done which was suggestive of a 9.3 x 5.6 x 6.1 cm sized accessory spleen with torsion. The patient had undergone an exploratory laparotomy and the devitalized splenic tissue was resected. Preoperative diagnosis of splenic torsion is usually missed and this is detected intraoperatively.[4, 5] However in our patient due to good clinical acumen the ultrasonic diagnosis of psoas abscess and ovarian cyst were disregarded due to mismatch with the abdominal and bimanual pelvic examination and a MRI was obtained which clinched the diagnosis. We feel clinical correlation is essential in such cases and appropriate imaging modalities can reach the final diagnosis preoperatively. Either way in pregnancy the enlarging gravid uterus changes the intra peritoneal dynamics and detection of benign pelvic masses in pregnancy and an acute or sub acute abdomen is always a challenge.

The gold standard for the diagnosis of accessory spleen is MRI. It is better at diagnosing the site of origin, clinical position of accessory splenic tissue, and diagnosing signs of inflammation. CT scan can also be done but it is not advisable in pregnancy. Angiography and nuclear Technetium scans are useful in diagnosing accessory splenic torsion but are useless when there is complete occlusion of arterial supply due to torsion.[4] Angiography is not advised during pregnancy because of fetal irradiation, while Technetium 99m scans can be done when the whole fetal exposure of 0.5 rad is not exceeded.[7]

Exploratory laparotomy or laparoscopy is safe in pregnancy in all trimesters though there is a slight increased risk of preterm labor.[9,10] Patients undergoing exploratory laparotomy for surgical management of acute abdomen was studied in a study conducted by Unal et al. [11] Patients tolerated the procedure well. Our patient probably had threatened labor due to the bicornuate uterus rather than due to the emergency laparotomy that was performed at the start of the 2nd trimester. Prompt diagnosis and management of acute abdomen is the corner stone for optimum maternal and fetal outcome as was seen in our case.

We thank Dr. Gwalani and his team. Department of Surgery, Seth GS Medical College and KEM Hospital for performing the operation.