Retained products of conception (RPOC) can trouble patients for many weeks and months. A 29 year old female married since 2 years with history of medical termination of pregnancy (MTP) with medical method 4 months ago presented with complaints of bleeding per vaginum on and off not relieved with oral medications. She had undergone dilatation and curettage for the same symptoms 3 months ago and the histopathology at that time showed proliferative endometrium. Her symptoms persisted, serum β hCG was 135 mIU/ml and Doppler showed signs of invasive mole. Successful operative hysteroscopy was performed and adhesiolysis of right half of uterine cavity with retrieval of retained products was done and a normal uterine cavity was achieved.

Fetal tissue remaining in the uterus after normal delivery, preterm delivery, spontaneous or induced termination is referred as retained products of conception (RPOC). Following medical method of abortion, the incidence of RPOC is higher. Initially, these products may infect the endometrium causing endometritis and later if untreated, may progress to myometrium and parametrium leading to peritonitis, as a result causing bacteremia and sepsis. Various treatment options include antibiotics and methotrexate, and surgical options like dilatation and curettage (D&C), hysteroscopy and even hysterectomy.[1]

A 29 year old patient married for 2 years, with history of medical MTP came to our OPD with complaints of on and off bleeding per vaginum. She gave a history of consumption of MTP pills 4 months ago followed by the same symptoms of bleeding per vaginum for which she underwent D&C 3 months after  the  MTP. Her β hCG was 118 mIU/ ml prior to the D&C. Histopathology report showed proliferative endometrium. However, following the D&C her symptoms persisted hence she presented to us. An ultrasound with Doppler was done which reported a large heterogenous lesion, on the right side, encroaching the endometrial canal on the right lateral aspect. On Doppler flows there was significantly increased vascularity seen within the lesion, with a high velocity and low resistance type of special pattern (trophoblastic pattern of flow), which could represent an invasive mole. Her β hCG titres were marginally raised to 135 mIU/ ml. 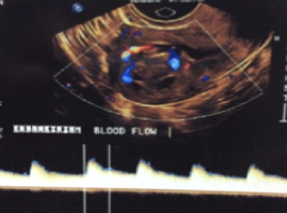 Decision to perform operative hysteroscopy with biopsy was taken with provision for laparoscopy if needed. On hysteroscopy, the entire right side of uterine cavity was obliterated with adhesions; only small left half was visible. 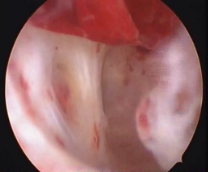 Figure 2. Right half of uterine cavity completely obliterated on hysteroscopy.

Removal of adhesions was done with hysteroscopic scissors and behind these adhesions, a large mass of RPOC was visible. Adhesiolysis was completed and the retained products were removed with cold resectoscope loop and hysteroscopic graspers. 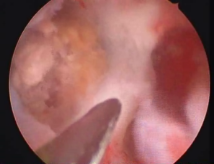 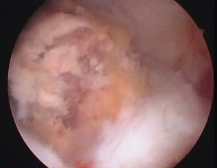 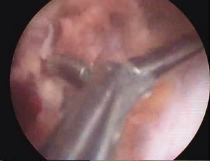 Following the adhesiolysis and removal of products, a normal uterine cavity was achieved. Histopathology report confirmed retained products of conception. Patient is now on follow up and has regular cycles post- procedure. 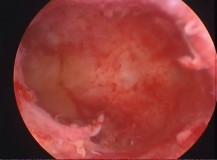 Invasive mole also called chorioadenoma destruens is a hydatiform mole, which invades the myometrium. It can progress to choriocarcinoma but may regress spontaneously. There may be penetration into the entire myometrium and it may involve the serosa, parametrium or vaginal vault. They are locally invasive but metastasis is not common. If the serosa is involved it may cause intraperitoneal hemorrhage.[2] Usually RPOC presents with abnormal uterine bleeding, pelvic pain, occasional pyrexia; on examination tenderness in the fornices may be felt. In this case since there was a complete adhesion in the middle of the uterine cavity secondary to sepsis caused by retained products, it mimicked an invasive mole on USG. Other symptoms such as bleeding per vaginum on and off also favoured invasive mole as there had been a previous D&C with histopathology showing proliferative endometrium. This was probably from the other half of the uterine cavity as D&C is a blind procedure and the right half of the cavity was obliterated due to adhesions and the retained products were trapped behind these adhesions. Many recent studies have evaluated the incidence of intrauterine adhesions following RPOC and have shown the superiority of hysteroscopic resection over traditional D&C. Gilman et al documented that intrauterine adhesions were seen in 6.3% of 144 women who had RPOC; risk factors are larger uterus, multiple pregnancy and mechanical evacuation.[3] Ben -Ami compared reproductive outcomes in 177 women with RPOC who underwent D&C or hysteroscopy, and found that hysteroscopic removal of RPOC was associated with a shorter conception time and lower rate of infertility as compared to D&C.[4] In a systematic review of long term complications and reproductive outcomes with RPOC, Hooker et al observed that while reproductive outcomes were similar to D&C, there were fewer incomplete evacuations and intrauterine adhesions with hysteroscopic resection. They concluded that more trials are required.[5]

Hysteroscopy is an easy and safe method for treating retained products of conception. It is a cost effective day care procedure. Risk with simple dilatation and curettage is avoided which is a blind procedure. Risk of adhesion, bleeding and fear of incomplete removal is avoided.  Hysteroscopy plays a vital role in diagnosis next to 3D USG, having the added advantage of  performing a therapeutic procedure for retained products. Minimal damage to endometrium with entire tissue retrieval under vision offers patients the best and economical care with minimal intervention.