We report a case of 46 XY pure gonadal dysgenesis with complete female phenotype. who presented to us with complaint of primary amenorrhea with absence of secondary sexual characters.

Swyer syndrome is a disorder of sexual development (DSD) caused by 46,XY complete gonadal dysgenesis. Swyer first reported two cases of this syndrome in 1955.[1] It is a rare disorder seen in 1 in 80000 births.[2] It is the result of mutations of the SRY gene or microdeletion in the SRY gene.  Due to defect in gene,  the indifferent gonads fail to differentiate into testis in an XY (genetically male) fetus. Absence of testes results in non production of testosterone  and antimüllerian hormone (AMH). Without testosterone the Wolffian ducts fail to develop and internal male organs are not formed and external genitalia do not virilize, resulting in development of normal female genitalia. Without AMH, the Müllerian ducts develop into normal internal female organs (uterus, fallopian tubes, cervix and upper third of the vagina). The streak gonads are at risk of developing  gonadoblastoma or dysgerminoma.[3,4] We present a case of Swyer syndrome.

A 22 year old female presented in the outpatient clinic with a complaint of primary amenorrhea and absence of development of breasts. She had not consulted earlier due to family history of late onset of menses. She was the tallest person in the family. Her siblings were normal. On examination, her breast development was Tanner stage 1, axillary and pubic hair was in Tanner stage 2-3. her height was 174 cm, arm span was 185 cm, lower segment was 98 cm, upper to lower segment ratio was 0.77, transeverse diameter of chest was 35 cm and internipple distance was 25 cm.  Her father's height was 172 cm and mother's height was 150 cm.  Abdominal examination was normal, external genitaila were as in a normal female. Vaginal opening was seen. Laboratory investigations showed FSH 77.76 mIU/ml, LH 30.64 mIU/ml, thyroid function tests, serum prolactin serum testesterone, and basal cortisol levels normal. Her karyotype was 46XY, Ultrasonography of pelvis showed a small sized uterus and streak gonads.

Vaginoscopy was done. It showed adequate length of vagina and a small cervix at top of the vagina. Laparoscopy showed rudimentary uterus and fallopian tubes, and bilateral streak gonads in the position of the ovaries. Bilateral gonadectomy was done by operative laparoscopy. Histopathology report showed mesonephric duct remnants and residual ovarian stroma. She was advised hormone replacement therapy. 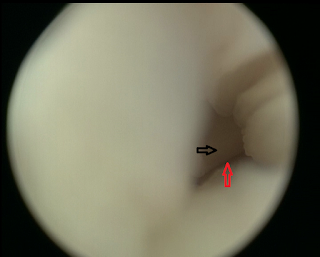 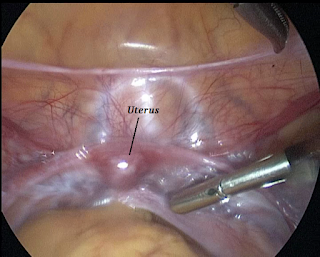 Figure 2. Uterus (arrow). Fallopian tubes are seen on two sides of the uterus. 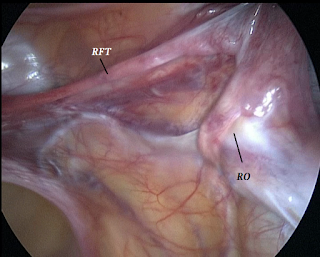 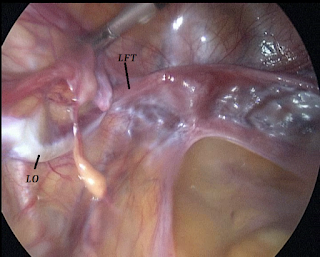 Various causative genes responsible for development of 46,XY DSD gonadal dysgenesisare ARX, ATRX, CBX2,  DHH,  DMRT1,  GATA4,  MAMLD1, MAP3K1, NR0B1, NR5A1, SOX9, SRY, WNT4, WT1 and WWOX.[5] This DSD may be a part of a genetic syndrome like campomelic dysplasia, Denys–Drash   syndrome and   Frasier   syndrome.[6] About 25% cases have associated anomalies of heart or central nervous system.[7]
The patient is a phenotypic female at birth and presents with delayed puberty and primary amenorrhea. The stature is tall. Breast development is delayed, but axillary and pubic hair is developed. Since less than 5% cases have a sibling with that condition, early suspicion and karyotyping is not possible. So the diagnosis may be delayed. Serum FSH level is high and karyotype is 46XY. Pelvic imaging shows streak gonads and normal or underdeveloped uterus and fallopian tubes. An early diagnosis is essential because the risk of gonadal neoplasia is increased,  early sex hormone administration has to be given for inducing and maintaining female pubertal development, and for achieving adequate bone mass. Gonadoblasomas can develop in one or both of the dysplastic gonads.[2,8,9] Though they are benign, they can lead to development of germ cell malignancy like dysgerminoma, endodermal sinus tumor, embryonal  carcinoma and teratoma. Hence when the diagnosis is made, bilateral gonadectomy should be done at the earliest, instead of performing a biopsy first. Then cyclical  estrogen  and progestin replacement therapy should be given up to the age of 50 years. Counseling need to be done to explain that menstruation and normal reproduction will not be possible, but sexual function will be possible. A pregnancy may be possible with ovum donation if the uterus is well developed.[10-13] If the vagina is not of adequate depth, a vaginoplasty will be required.