The last decade has seen the rise in rates of cesarean sections and subsequently the rise in rates of abdominal wall hernia.[1,2]  Repeated surgery also causes weakness of the abdominal wall due to destruction of nerves, muscles and more importantly the rectus sheath. Solution to this is primarily surgical.[3-5] However frequently these women do not visit a surgeon till the time of the next pregnancy where they are scheduled for a repeat cesarean section as in our case. At this point in time a surgeon may or may not be available. Conventional open repair often produces an undesirable scar. Laparoscopic repair requires multiple incisions beyond the umbilicus, specialized equipments, and expensive tissue separating mesh. Correcting the defect at the time of cesarean section avoids need for repeat surgery. The authors write this article with the aim of educating the readers with technique and methods of treating laxity of the abdominal wall at the time of cesarean section.

A 32 year old woman with two living children in her third pregnancy had a satisfactory course during her antenatal checkups. Her first pregnancy resulted in a cesarean section for transverse lie. Apart from this her past history was not significant. Per abdominal examination showed a term pregnancy with a vertical infraumbilical incision. Laxity of the anterior abdominal wall was demonstrable as well as eversion of the umbilicus. She was admitted at 38 completed weeks of gestation for an elective cesarean section with tubal ligation. Written inform consent was taken and patient shifted to the operation theater. After spinal anesthesia the surgical field was disinfected. Vertical skin incision was taken, the incision extended to the limit of the scar of previous pregnancy. Cesarean section was completed and hemostasis achieved. The surgeons decided to tackle the rectus sheath laxity from within. With two Allis' forceps both ends of the rectus sheath were held and rectus sheath was separated from the muscle and subcutaneous tissue. The sheath was then cut and the cut edges sutured over each other in a double breasted manner with monofilament nylon 1-0 continuous interlocking suture material. This was then reinforced with a layer of polyglactin No. 1 continuous interlocking suture. The skin was closed with monofilament nylon 2-0 interrupted suture. At suture removal, two weeks from date of surgery, the she is doing well and the umbilicus is inverted. 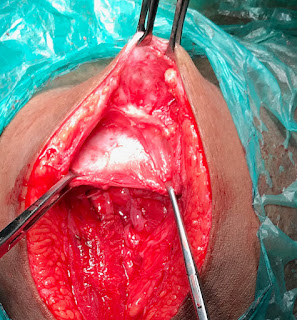 Figure 1. Rectus sheath is exposed after completion of the cesarean section and held with two Allis' clamps. 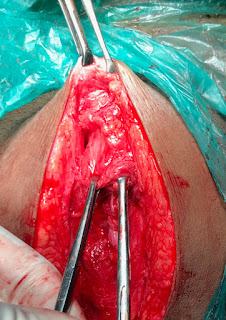 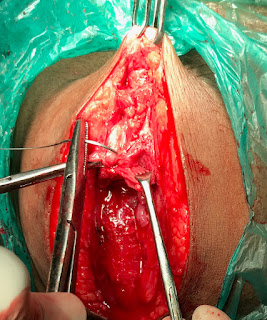 Figure 3. Double breasting of the rectus sheath is done with monofilament nylon 1-0 suture material in a continuous interlocking manner. 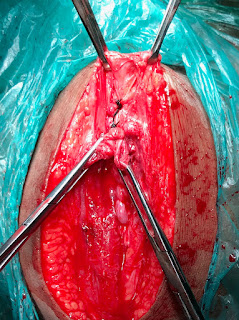 Figure 4. Suturing is complete and continued to the entire length of the rectus sheath.

A popular method of treating anterior laxity of the abdominal is by use of a mesh.[6] The mesh can be placed by flipping the anterior abdominal wall over itself with the help of Allis' forceps. The rectus sheath is dissected with the help of either blunt or sharp section and cut longitudinally. The two ends of cut ends of rectus sheath are then approximated with monofilament nylon 1-0 suture. Critical to the approximation is double breasting or overlapping the two leaves of rectus sheath. This tightens the anterior abdominal wall and prevents gaping or giving way of the rectus sheath.
Timing is also of importance. Frequently the surgical correction of the abdominal wall is dissuaded till after the cesarean section. This is not necessary. Correcting the defect at the same time of cesarean section is convenient for both the surgeon and the patient. In our case the skin incision was not extended above the umbilicus and the surgery completed directed from within the peritoneum outwards to the skin.
Laparoscopic repair has today become a popular option for hernia repair. Davis et al compared the laparoscopic and open route. Laparoscopic ventral hernia repair yielded lower rates in terms of postoperative superficial surgical site infections as compared to repair by open surgery.[7] Kitamura et al studied the use of tacks in laparoscopic umbilical hernia repair and found that there are no differences in postoperative complication rates in suture versus tack mesh fixation in laparoscopic umbilical hernia repair.[8] With the advent of natural orifice surgery (NOTES), ventral hernia repair can also be done via the transvaginal route.[9] This however, still remains an uncommon approach for most surgeons in developing countries who primarily rely on a mini laparotomy incision with use of either suturing or a mesh.[10]