Uterine defects at the scar site are commonly seen after uterine surgeries such as hysterotomies and cesarean deliveries. The authors report a case of a uterine fundal wall defect noticed during a cesarean delivery in a patient with prior history of uterine curettage. Vigorous curettage of the uterine cavity can result in removal of myometrium and a uterine wall defect as was seen in our case. Subsequently this can lead to an outpouching or diverticulum.

Uterine defects at the incision site are commonly seen after uterine surgeries such as hysterotomy and cesarean delivery.[1] Such defects include a niche, isthmocele and in some cases an out-pouching or a diverticulum.[2] Defects in the uterine wall in the fundus of the uterus in the absence of a history of uterine surgery are not documented. The authors report a case of a uterine fundal wall defect noticed during a cesarean delivery.

A 29 year old woman with two prior spontaneous abortions came to our department at full term. Both spontaneous abortions occurred in the first trimester and were managed with curettage. She was diagnosed with gestational diabetes mellitus at 35 weeks of gestation and started on oral metformin with dietary changes. A year ago, in 2017, she was investigated for her prior obstetric history and was found to be positive for antinuclear antibodies (1:160 titres). Additionally, in the same year, she was diagnosed with thyroiditis and hyperthyroidism and treated with methimazole and propylthiouracil. Her present confinement was spontaneous and at term an obstetric examination revealed a breech presentation. Ultrasonographic examination showed anterior placentation and a full term fetus. She underwent an elective lower segment cesarean delivery for breech presentation. A male fetus weighing 3.5 kg was delivered followed by the placenta.

After the delivery of the placenta, the surgeons noticed a 2x3 cm protrusion on the anterior surface of the uterus in the region of the uterine body, approximately 4 cm from the fundus of the uterus. This protrusion was away from the uterine incision and was increasing in size as uterus contracted. Palpation from within the uterine cavity revealed the absence of about 3x4 cm area of myometrium at this site. The out-pouching or diverticulum was covered only by a flimsy layer of serosa of the uterus (figure 1). The defect was opened, uterine myometrium approximated and sutured with vicryl 1 interlocking sutures. This was undertaken in order to prevent subsequent rupture of the uterus. She tolerated the procedure well. She was advised an elective cesarean delivery at the next confinement and is doing well on follow up visits. 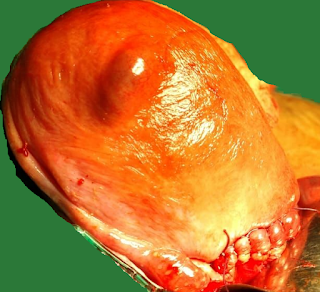 Cesarean scar defects have been reported. These defects are caused after previous uterine surgery like hysterotomy and cesarean delivery.[1-3] A niche is a minor defect at the scar site which does not require active intervention. In some cases there may be out-pouching of the endometrium and uterine wall at the scar site leading to a uterine diverticulum. Repair of a diverticulum should be undertaken in the presence of symptoms which include intermenstrual tarry bleeding and pelvic pain.[4,5]
Reports of uterine wall defects at a site distant from the scar site and after curettage are infrequent. It is known that perforation of uterus during curettage can lead to uterine rupture in subsequent pregnancies. Vigorous curettage of the uterine cavity can result in removal of myometrium causing a defect in the uterine wall as was seen in our case. As a result this can lead to an out-pouching or diverticulum. A possible mechanism for the development of a diverticulum is increased intrauterine pressure on the weakened uterine wall. Diagnosis of the defect includes imaging with transvaginal USG, hysterosalpingography and MRI. Definitive diagnosis is made on endoscopy and laparotomy. The presence of a diverticulum at surgery warrants repair if the defect is expansive as a result of increased intrauterine pressure. A repair is done in order to avoid rupture of the uterus in the future. The patient with a repaired uterine wall defect should undergo an elective cesarean delivery in subsequent pregnancies.