Umbilical cord contains two arteries and one vein. Either or both of these type of vessels can develop thrombi. There are a number of causes for umbilical vascular thrombosis, and the fetal outcome can be poor in a number of cases. A case of silent development of multiple thrombi in fetal umbilical vein without any cause and with normal fetal outcome is presented.

Thrombosis of the umbilical vein is a rare condition that may cause a high fetal mortality and serious fetal morbidity. There are a number of maternal and fetal causes for umbilical arterior and/or venous thrombosis. Presence of any of the maternal conditions should alert one to look for such thrombosis. Presence of fetal complications should also alert one in a similar manner. A case of thrombosis of the umbilical vein without any cause and with a good fetal outcome is presented.

A 25 year old primigravida was registered with us for antenatal care. She had a normal cpurse of pregnancy. She did not have any illness. She took her iron, calcium and folic acid medication and tetanus immunization as per prescription. Her hemogram, plasma sugar levels, liver, renal and thyroid function tests showed normal results. Her serological tests for syphilis, HIV, hepatitis B and hepatitis C were negative. First trimester obstetric ultrasonography (USG) and an anomaly scan at 18 weeks showed normal results and no abnormalities. Subsequent USG scans showed normal fetal growth. She underwent an elective cesarean section for inlet pelvic contraction, and delivered a female child weighing 3.05 kg. The newborn had Apgar score of 9/10 at 1 min and 5 minutes after birth. The umbilical cord showed multiple small thrombi. The baby did not show any abnormality. 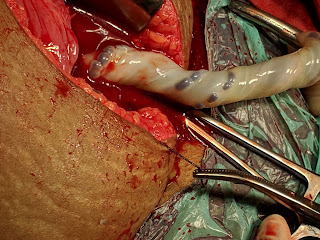 Complete occlusion of the umbilical vessels can cause fetal death.[6,7,9.] Less than complete occlusion can cause fetal growth restriction.[1] Migration of smaller thrombi in the fetal circulation can cause renal  or cerebral infarcts, and amputation of the digits.[3,6] Hyrtl’s anastomosis is anastomosis between two umbilical arteries. It is found in 90% placentas normally. It protects from development of placental hypoxia and infarction in cases of umbilical arterial thrombosis.[6,8] Such anastomosis was seen in the case presented.

The outcome was good in the case presented because there were small scattered umbilical venous thrombi without complete occlucion of the vein. The importance of detecting such thrombi in the absence of any fetal effect is to make the obstetrician and neonatologist alert to the possibility of presence of the predisposing conditions, so that appropriate investigations can be done and conditions not detected so far can be diagnosed early and then treated appropriately. Neonatal clinical evaluation investigations did not reveal any neonatal morbid conditions and predisposing factors in the case presented.