Gupta P*, Parulekar SV**
(* Second Year Resident, ** Professor and Head of Department
Department of Obstetrics and Gynaecology, Seth G.S. Medical College and K.E.M Hospital, Mumbai, India.)
Abstract
A free-floating intraperitoneal mass is extremely rare, almost always discovered incidentally.
We present an anusual case of such a mass found incidentally during vaginal hysterectomy and vaginal wall prolapse repair. Pathological examination of the mass showed it to be a serous cystadenofibroma with autolytic changes. The origin of the mass was most probably one of the ovaries.
Introduction
Free-floating intraperitoneal masses are extremely rare. These abnormalities can be of unknown origin or can arise from various organs, most common being ovary due to autoamputation  following torsion or an appendix following infarction, an organised fat necrosis or an intra abdominal tumor. These are almost always found incidentally during surgery like an  exploration for an acute abdomen or abdominal distension or while investigating an unrelated disease. Ours is a case of a free-floating intraperitoneal mass discovered incidentally during vaginal hysterectomy of a 40 years old perimeopausal woman with uterine leiomyoma and vaginal wall prolapse. Both the ovaries were found to be normal. Pathological examination of the mass showed it to be a serous cystadenofibroma with autolytic changes. This is the first case of a free-floating intraperitoneal ovarian cyst in presence of normal ovaries.
Case report
A 40 years perimenopausal woman presented with complaints of menorrhagia and something coming out vaginally for four months. There was no history  of any episode of an acute pain in the abdomen. Her past medical and surgical history was not contributory. Her general condition was fair. General and systemic examination revealed no abnormality. Gynecological examination showed a uterus of 6 weeks’ size, moderate cystocele and moderate rectocele. Her hemogram and biochemical tests were normal. Abdominopelvic ultrasonography revealed a leiomyoma measuring 2 cm in diameter in the anterior wall of the uterus. There was no mass or free fluid. A vaginal hysterectomy with anterior colporrhaphy and posterior colpoperineorrhaphy was done under spinal anesthesia. After clamping, cutting and ligating the uterine vessels, a mass was noticed posterior and superior to the uterine fundus. After clamping, cutting and ligating the cornual structures on both the sides and removal of the uterus, the mass was found to be free-floating in the peritoneal cavity. It was removed easily. It was 8.0×4.5×5.0 cm in size, soft, and cystic (figure 1). Both the ovaries were found to be normal and in their normal positions. The patient made an uneventful recovery. Pathological examination showed a cystic mass with 20 ml of pultaceous material in it, suggestive of autolytic changes. Multiple nodulopapillary exascences were identified . Morphologically it resembled of  serous cystadenofibroma. Histopathological examination was uninformative due to autolytic changes in the mass. 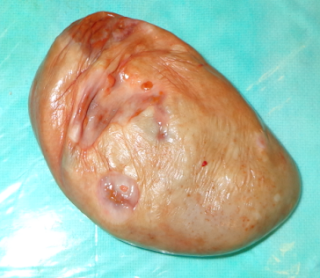 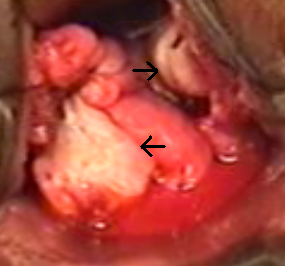 Figure 2. View of pelvic cavity after vaginal hysterectomy. Both the ovaries (arrows) are normal and seen in normal positions.
Discussion
Free floating intraperitoneal masses are exceedingly rare masses. Such a mass may be the result of an auto amputation of an ovary (normal or with a cyst or tumor) following its torsion,[1,2] a mass from the appendix separated after auto amputation, infarcted appendices epiploicae, a hydatid cyst,[3] a mass from the rectum,[4] or organised fat necrosis or hematoma.[5] Such patients would have a history of an acute abdomen in the past, which resolved with conservative treatment. Most of these masses are detected incidentally at the time of an abdominal operation for some other indication. The concerned organ like ovary or appendix is absent in such cases. The case presented was unusual in that the structure of the mass was that of an ovarian serous cystadenofibroma, but both the ovaries were normal. Probably it was a tumor which had developed at a pole of ovary, the part between the tumor and the rest of the ovary being constricted due to past ovulations and scarring. This must have been the site of torsion of the mass, which caused necrosis of the connection and the separation of the mass. The rest of the ovary remained behind and survived. Another possibility is that it arose from ectopic ovarian tissue of embryological origin, a supernumerary ovary.[6,7] It is not possible to determine which of the two was the source of the mass. Irrespective of the source, all loose free-floating masses in the peritoneal cavity should be removed, as they can get infected.
References
1.      Currarino G, Rutledge JC. Ovarian torsion and amputation resulting in partially calcified, pedunculated cystic mass. Pediatric Radiology. 1989;19(6-7):395–399.