An Unusual Case of Endometrial Polyp

A 57 year old woman, married for 27 years, para 2 abortion 1, menopausal for 14 years, presented with a complaint of post-menopausal vaginal spotting. She had had 2 such episodes in the preceding 2 months. She had undergone colpohysteroscopy with dilatation & curettage in just prior to menopausal 2 years ago, for abnormal uterine bleeding. Pelvic ultrasonography (USG) done prior to the procedure had shown hypertrophied endometrium. Histopathology report though, was not available. On per speculum examination; she had a 2x1x.3cm irregular polyp protruding from external os. Polypectomy with fractional curettage was done. A 6×2×1 cm polyp was removed. The polyp had a 1 mm diameter pedicle. Histopathology report showed a benign polyp with endocervical dysplasia.

An endometrial polyps is a localized overgrowth of endometrial tissue. It may be pedunculated or sessile, single or multiple. Pedunculated polyps are more common than sessile ones.[1] Endometrium grows in response to circulating estrogen, and localized growth results in formation of polyps. Formation of new polyps should be unusual after menopause, because estrogen production by the ovaries is low or absent. Similarly old polyps should not grow after menopause. Uterine contractions may cause elongation of the pedicle of a polyp, trying to extrude it from the uterine cavity. If the pedicle finally necroses, the polyp may be expelled spontaneously. We present a case in which a polyp grew after menopause and one which had a pedicle measuring 1 mm in diameter, attaching it to the endometrial surface.

A 57 year old woman, married for 27 years, para 2 abortion 1, presented with a complaint of post-menopausal vaginal spotting. She had 2 such episodes. She had been menopausal for 14 years. She had had 2 such episodes in the preceding 2 months, for which she had not taken any treatment. She had undergone colpohysteroscopy with dilatation & curettage in just prior to menopausal 2 years ago, for abnormal uterine bleeding. Pelvic ultrasonography (USG) done prior to the procedure had shown hypertrophied endometrium. Histopathology report was not available, though the patient stated that there had been no cancer. On per speculum examination; she had a 2x1x0.3cm irregular, soft polyp protruding from external os which did not bleed on touch. It was free from cervix all around. Polypectomy with fractional curettage was done, keeping in mind her post-menopausal status. The polyp was held with sponge holding forceps and it came off very easily on mild traction. It was soft, flat, and easured 6x2x0.3 cm (figure 1). It was attached to the endometrial surface with a pedicle 1 mm in diameter. The patient made an uneventful post-operative recovery. Histopathology report showed a benign polyp. Endometrium could not be commented upon. 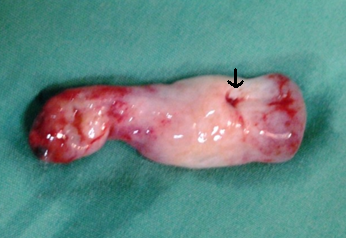 Figure 1- Gross appearance of the polyp. Arrow indicated the broken pedicle, 1 cm from the upper end.

An endometrial polyp ranges in size from a few millimeters to many centimeters. Its prevalence rate ranges from 10% to 40% in women with abnormal uterine bleeding.[2] Polyps may be found in up to 12% of asymptomatic women in routine examinations.[3] Malignancy is found in endometrial in 0.8% to 8% cases.[4] Lee et al reported in a metaanalysis the prevalence rate of premalignancy and malignancy in endometrial polyps of 3.57%.[5] Larger polyps are associated with a higher risk of malignancy.[6] Owing to low rates of malignancy, there is trend towards not removing such polyps if asymptomatic. However all polyps must be removed if symptomatic, or if a malignancy is considered likely. Polyps associated with endometrial hyperplasia should also be removed. Polyps which are recurrent, or which appear or grow after menopause should also be removed. In the case presented, the polyp possibly appeared and grew after menopause. The endometrium lining the uterine cavity did not show hyperplasia or malignancy, suggesting that the polyp possibly had existed at the time of the first curettage, and had been missed. Another unusual thing about the polyp was the size and location of its pedicle. It measured just 1 mm in diameter, and was attached to the polyp 1 cm from its upper end. It was very fragile and possibly would have broken by itself some time. Whether the postmenopausal uterus would have been able to expel it was doubtful. But would have necrosed after breaking of its pedicle, got infected, and would have necessitated its removal eventually.