Conjoined twins are identical twins whose bodies are joined in utero.[1]  It’s a rare phenomenon with an incidence of 1 in 50,000-100,000 births. The incidence is somewhat higher incidence in Africa and Southwest Asia.[2] The overall survival rate for conjoined twins is approximately 25%[3] and the condition is more frequent among females,[2] with a ratio of 3:1. It is rare to see a conjoined twin reaching up to term. The present case merits attention because it is an unusual case of a patient who presented with an undiagnosed conjoined twin reaching full term and subsequently delivered vaginally. 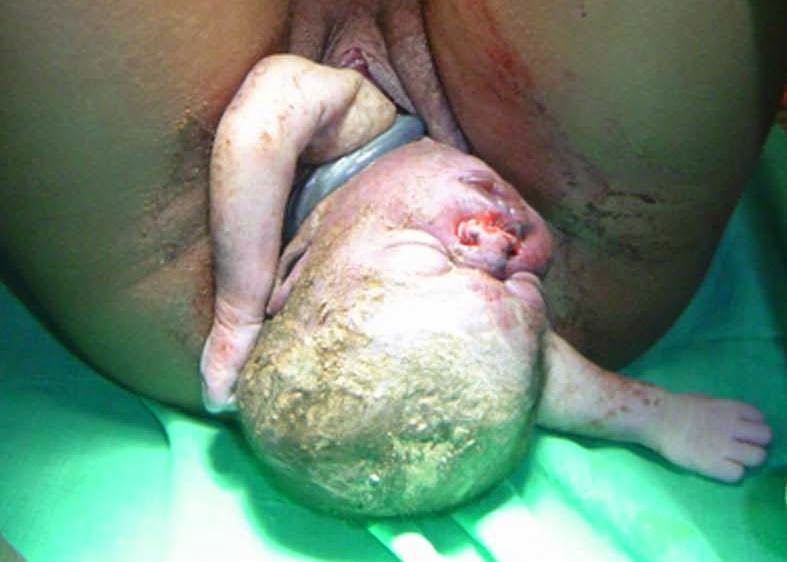 Figure 1. One twin has delivered up to the thorax. 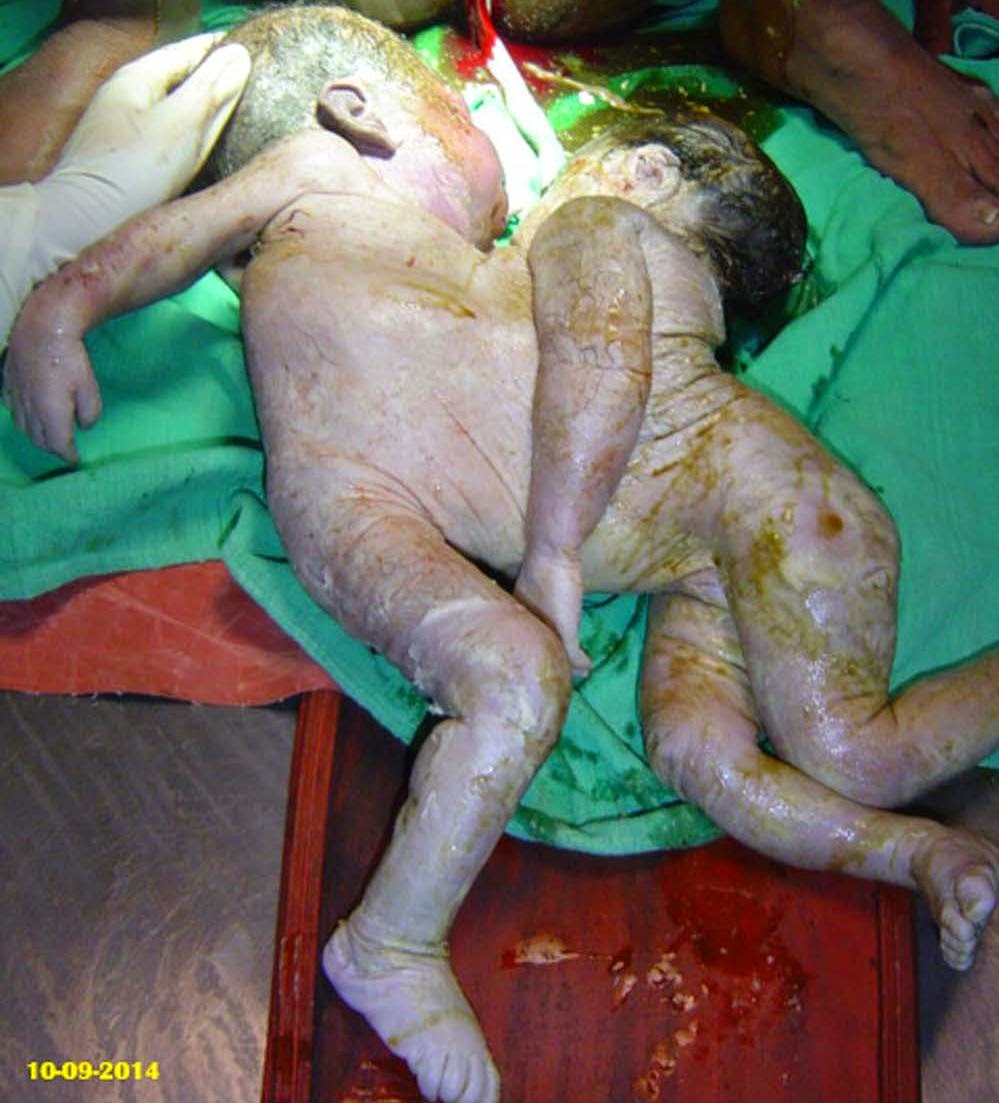 
A 28 years old gravida four and para three presented with amenorrhea of 9 months and labor pains since 6 hours. A traditional birth attendant (TBA), called dai in the vernacular in India, had tried to deliver the baby at home, but in spite of applying traction, had only succeeded in delivering the head and the patient was referred to our hospital for management. On presentation at our hospital, the baby’s head and both arms were found to have delivered (figure 1).
The patient’s vital parameters were normal but she was exhausted. Her per abdomen examination showed that her uterus was term sized with full bladder reaching up to umbilicus and absent fetal heart sounds suggesting fetal death. After catheterization and emptying the bladder, local examination revealed that the baby’s head was cyanosed and both arms were delivered and the umbilical cord without pulsation was entangled in right shoulder (figure 1). After lifting the head another fetal arm was seen. A vaginal examination was performed which showed the presence of a second conjoined fetus in the uterus. With all preparation for surgery, a gentle traction was given to the delivered fetal head with the hope to deliver the dead twins vaginally. The patient delivered the trunk and the limbs of the first twin, followed by the head, trunk and limbs of the second twin in that order. The twins were female. Figure 2 shows the still born female conjoined thoraco-omphalopagus twins weighing 5.2 kilograms with single placenta soon after normal vaginal delivery and catheterized patient with the umbilical cord still within the uterus in the background.


Thoraco-omphalopagus twins develop from a single ovum, when the embryo divides more than 13 days after fertilization, when the division is incomplete. The placenta tends to be monoamniotic monochorionic type.[6,7] Various types of conjoined twins are as shown in the following table, of which only 60% are born alive.[8,9]

Attention should be focused on training TBA to recognize complicated pregnancy and to make them understand when to refer such cases to medical centers instead of attempting home delivery. Antenatal visits ensure that complications of pregnancy are picked up easily and rare events like conjoined twins can be easily diagnosed on fetal ultrasonography. It should be suspected whenever there is a diagnosis of monochorionic monoamniotic twin, fetal bodies never seen separately on regular USG, presence of  multiple vessels in umbilical cords and detection of other anomalies.[10] Conjoint twin can be ruled out once distinct placenta or no intervening membranes are seen. Two dimensional ultrasound with color Doppler has emerged as an important prenatal diagnostic tool for diagnosis of conjoined twin at 11 to 14 weeks.[11,12]


The delivery of conjoined twins is the next important decision to make. Vaginal delivery is virtually impossible in conjoined twins as obstruction is inevitable, unless the fetuses are macerated or when labor occurs prematurely.[6,7] If the fetuses are viable, they require delivery by cesarean section and when they are not viable they still require cesarean delivery because of the dystocia presented, unless they are very small and then vaginal delivery may succeed.[5] The present case stands out because the patient was an unbooked case that presented as an emergency due to obstructed labor. There was no time to perform any tests like radiography or ultrasonography. The diagnosis of conjoined twins was made in the course of managing the emergency and large conjoined twins weighing 5.2 kilograms were delivered vaginally which is a rare event and which proved to be quite fortuitous in this case.

Conjoined twins are an uncommon phenomenon and their vaginal birth is a rare event. Antenatal visit and proper care would ascertain that unexpected encounters like the one cited in this report are avoided.