Endometrium can develop a number of chronic granulomatous as well as nongranulomatous inflammatory lesions. We present a case of an endometrial microscopic foreign body of plant origin. This is the first case of its type in the world literature.

Introduction
The endometrium can be affected by a number of inflammatory agents, infectious as well as noninfectious. Infections include tuberculosis, atypical  mycobacterial infection, actinomycosis, endemic mycosis, and parasitic infestation. Noninfectious  conditions  include foreign  body  reaction, sarcoidosis, lymphoma and other neoplastic conditions, Crohn  disease, and operative trauma. We present a case of an endometrial foreign body reaction that was focal and microscopic, the foreign body being of plant origin. This is the first case of a microscopic foreign body in the endometrium with chronic inflammation in the world literature.

A 54 year old woman presented with a second degree uterine prolapse, moderate cystocele and moderate rectocele. She had been married for 30 years. She had a normal delivery 27 years ago and a medical termination of pregnancy at 2 months of amenorrhea by medical method 25 years ago. Check curettage had not been done at that time. She had undergone laparoscopic sterilization 17 years ago and an appendectomy 8 years ago. She developed pulmonary tuberculosis 6-7 years ago, and had received full treatment for it. She was found to be cured after that treatment. She was menopausal for 3-4 years. There was no history of use of any herbal preparations vaginally at any time in her life. A vaginal hysterectomy with vaginal prolapse repair using site specific method was done. She made an uneventful recovery. She was all right at follow up after 15 days, 1 month and 2 years.
Gross examination of the specimen showed that the uterus measured 7x0.8x1 cm. The cervix was keratinized. On cutting the uterus open, the endometrium was 0.2 cm thick, the myometrium was 0.6 cm thick. The endometrium and myometrium were grossly normal. Microscopic examination showed a small foreign body of plant origin in the endometirum of the corpus. It was composed of cells with thick, rigid cell walls arranged end to end. A brownish pigment was also seen in the cells. These features were typical of plant origin cells. Animal cells have thin cell membranes. The foreign body was surrounded by dense fibrinous material and neutrophils. Indentation of the surface was seen by the foreign body. The endometrium showed atrophic features. The myometrium showed calcification of the wall of small arterioles. The cervix showed features of chronic cervicitis with prominent keratinization of the squamous epithelium and squamous metaplasia of the endocervical glands. 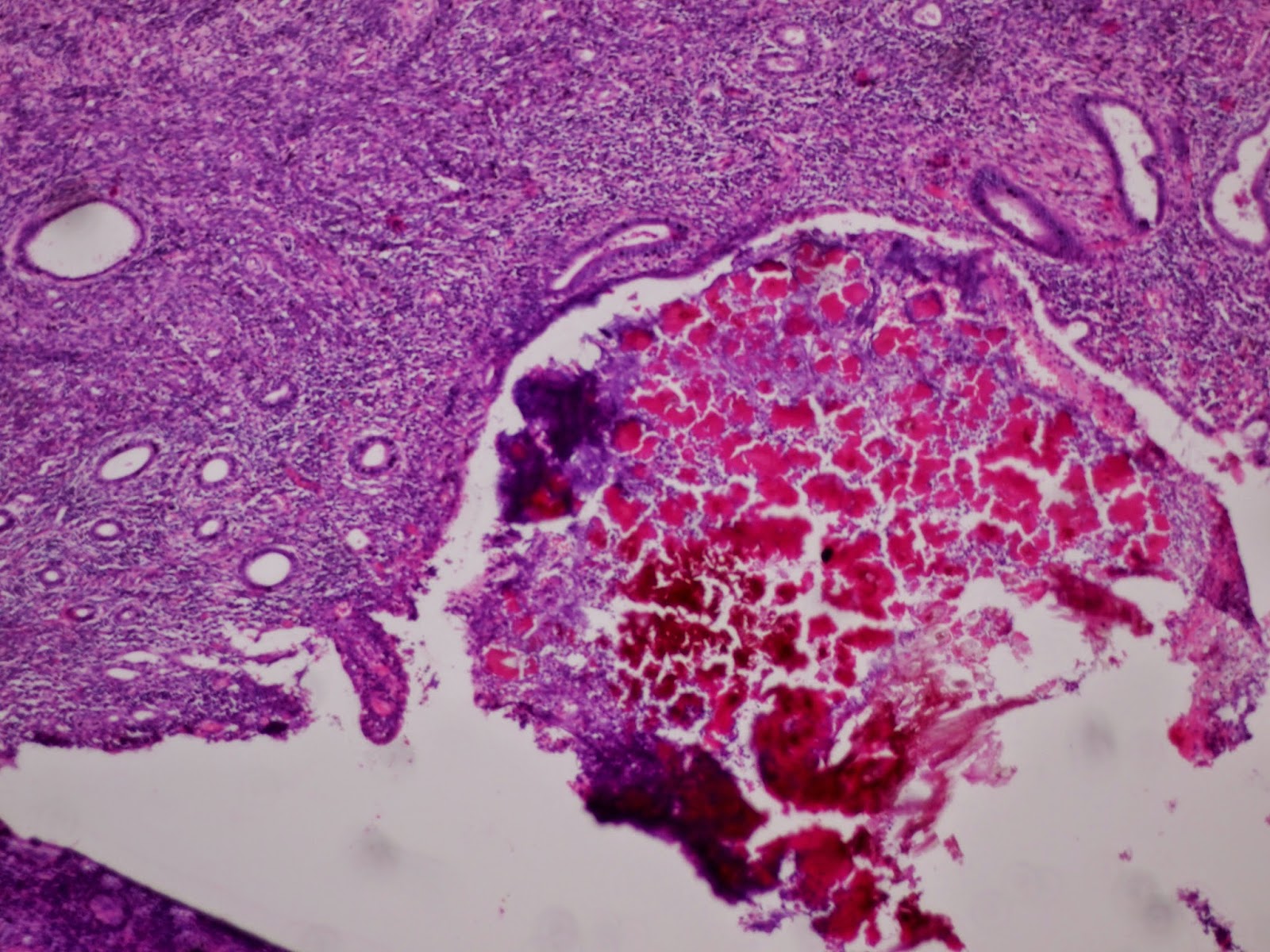 Figure 1. Microphotograph showing foreign body with an intense reaction around it and indentation of the endometrial surface. Atrophic endometrial glands are seen. (H&E x100) 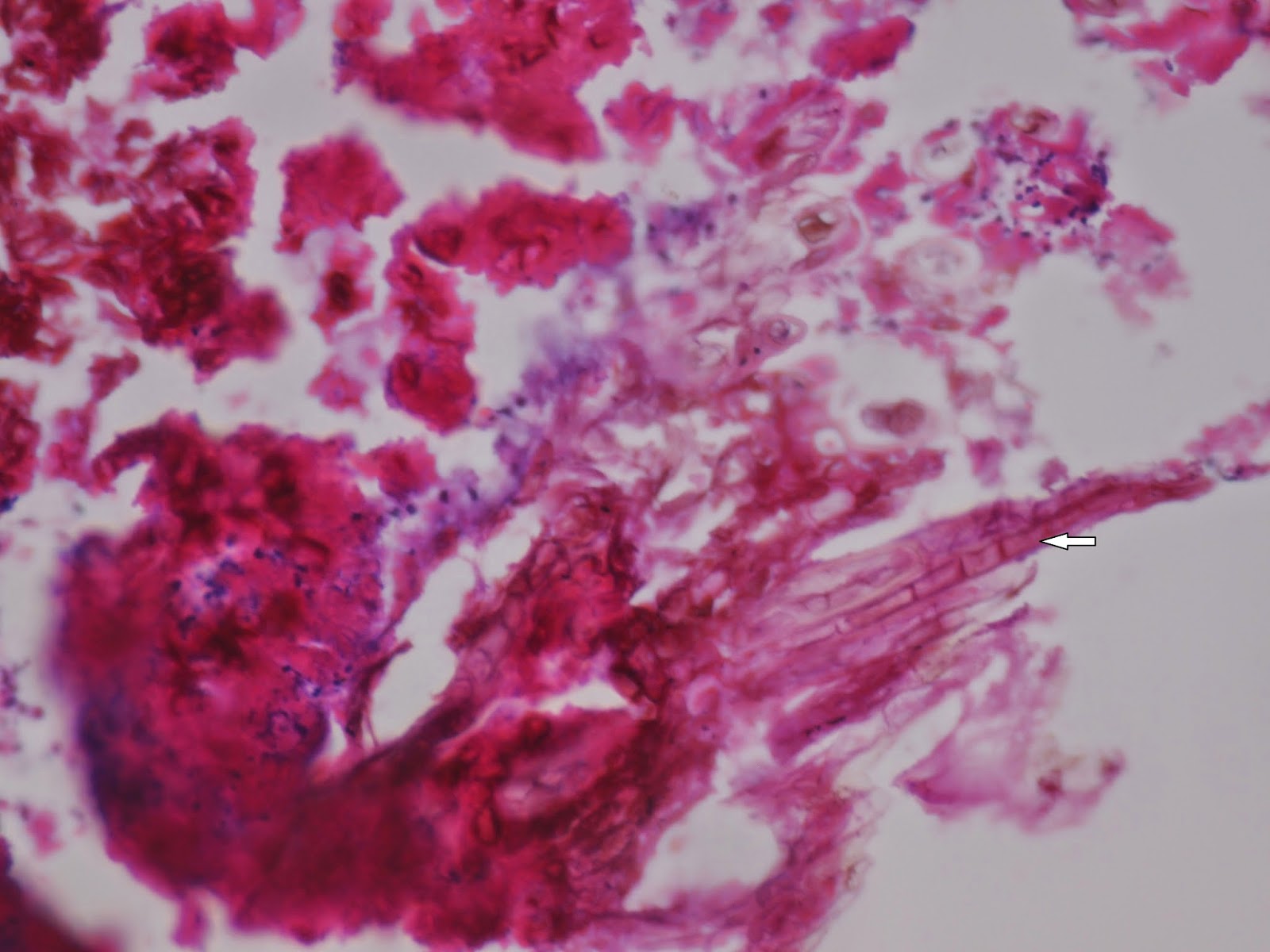 Figure 2. Microphotograph of a higher magnification showing the foreign body composed of plant origin cells with thick cell walls. Fibrinous material and neutrophils are seen around it. (H&E x 400) 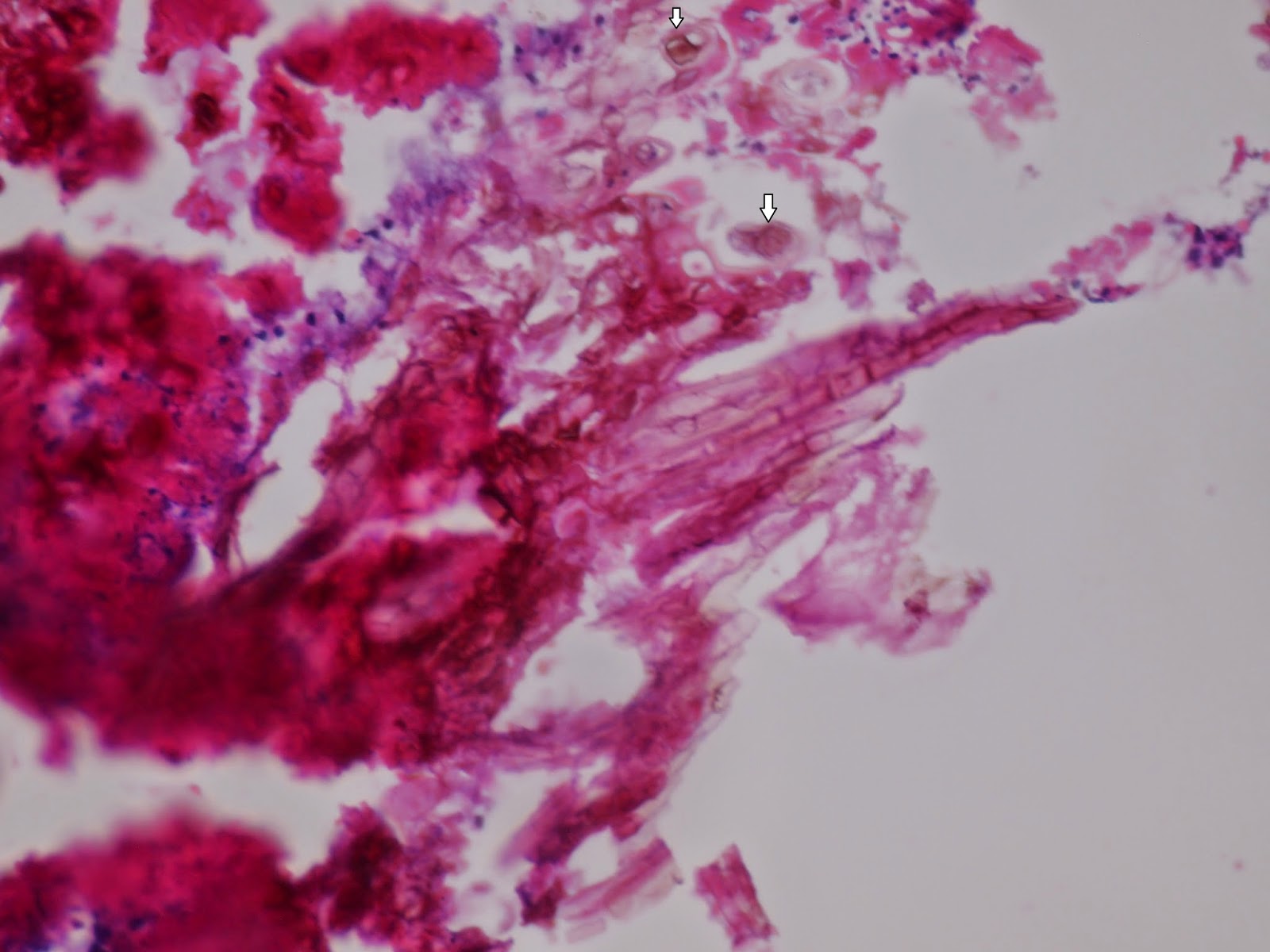 Figure 3. Some of the plant origin cells are cut in transverse section and show brownish pigment. (H&E x 400) 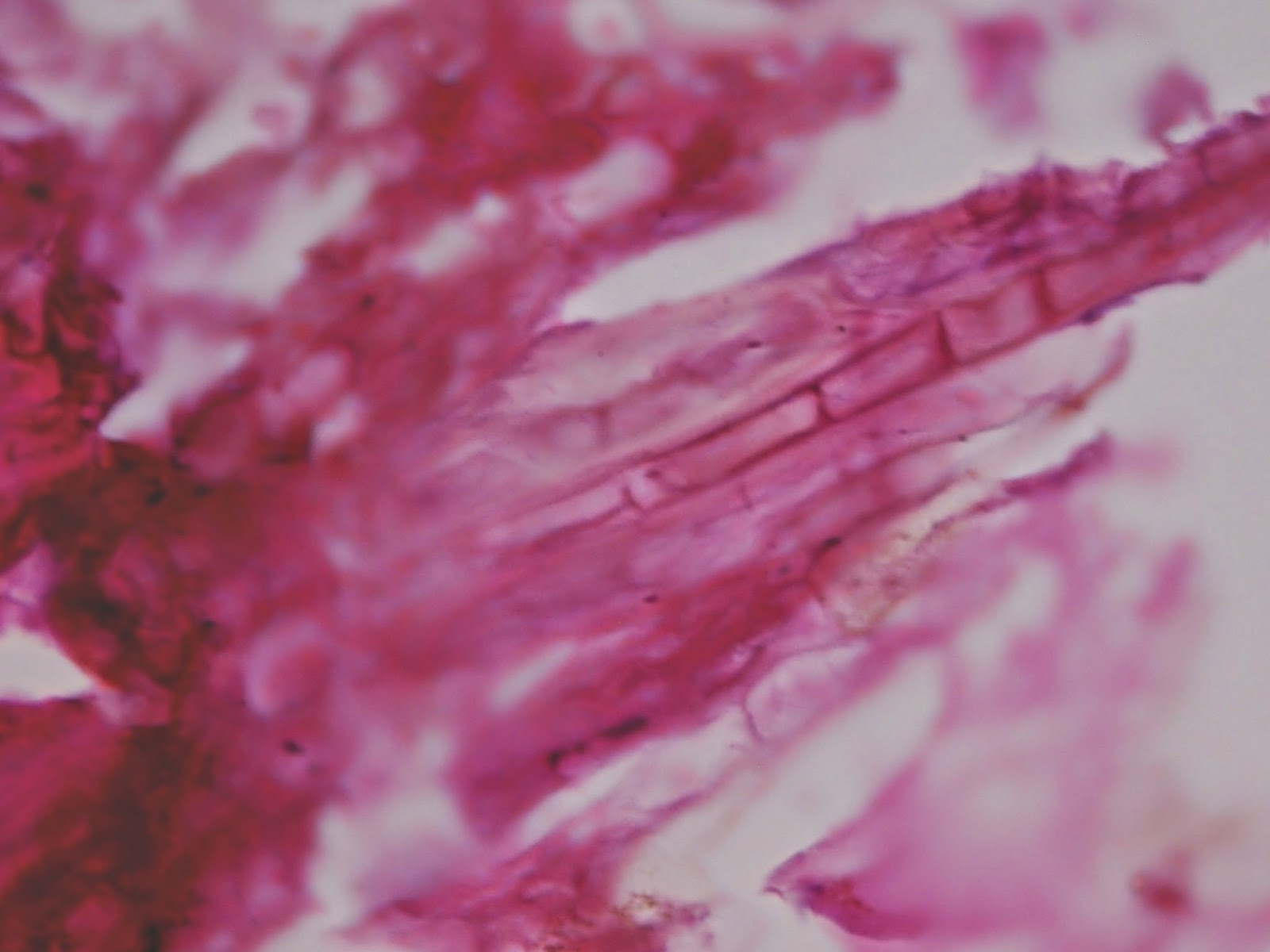 Insertion of foreign bodies into the vagina is much more common than into the uterine cavity, because the patient or someone else can do it easily. Insertion of foreign bodies into the uterine cavity is much more difficult. It requires some training, and is usually done as a part of therapy by the doctor or for achieving criminal abortion by quacks. Microscopic foreign particles may enter the uterine cavity along the cervical mucus, aided by the ciliary action of the endocervical cells. It occurs in case of sperm and has been shown to occur experimentally too.[1,2] Since this patient gave no history of insertion of any foreign body into the genital tract, either by self or by a doctor or a quack for any reason, the microscopic foreign body of plant origin in her endometrium cannot be explained easily.
Twigs of certain plants have been inserted into the uterine cavity to achieve illegal (criminal) abortions.[2,3,4,5] It is possible that a portion of the foreign body remains in the uterine cavity and elicits chronic inflammatory response. This patient refused having undergone any such procedure. It is possible that she had it done and was denying it out of fear of disclosure.
Aegle marmelos (Bilva, wood apple tree) is a plant with medicinal value in Ayurveda. Its fruit extracts have been used by Ayurvedic physicians for its astringent action in the management of chronic diarrhea and dysentery, hemorrhoids, and possibly genital prolapse. It is used orally for control of gastrointestinal symptoms and vaginally (pichu) for local symptoms.[6] It is possible that this patient tried the vaginal administration of this preparation for her genital prolapse and hid the fact when it failed to cure her and she presented to us for management. The particles in the pichu might have ascended to reach the endometrium and caused chronic inflammation.
Another possibility is that the patient sat on the ground without undergarments, and the prolapsed cervix picked up plant debris from the ground. Microscopic particles of the same may have traveled up the uterus passively and set up a chronic inflammatory reaction. Foreign bodies like foreign material from glove talc or suture may cause foreign body reaction in the endometrium in women who have undergone surgery in that area.  Use of surgical diathermy can also elicit such reaction in the endometrium.[7] This patient did not have any uterine surgery in the past.
The lesion found in the endometrium of this patient was a chronic inflammatory reaction to a foreign body of plant origin, distinct from all granulomas, as can be found with tuberculosis, schistosomiasis, Enterobius vermicularis infestation, coccidiomycosis, cytomegalovirus, sarcoidosis, granulomatous vasculitis, radiation, and ceroid granulomas.[9,10,11,12,13,14]

Microscopic chronic endometrial focal inflammation can be because of a number of conditions. It needs to be differentiated from granulomatous lesions which have a much worse prognosis. A foreign body of plant origin may enter the genital tract due to self insertion, criminal abortion with an abortion stick, or possibly to uterine prolapse.