A suture granuloma is a small mass of clustered immune cells that may develop around the site of a surgical procedure. It is a rare complication of surgery as some types of sutures appear to promote granuloma formation more than the others. Especially in a case of previous surgery, even small masses must be evaluated with care to differentiate between benign and malignant growths. Here we report a case of a suture site granuloma on the neo cervix post Fothergill’s surgery for utero-vaginal descent.

One of the essential steps of a methodical surgery is proper wound closure which includes proper approximation of the tissues and the suture material that is being used. Each suture material has their own merits and demerits but a known complication of non absorbable suture material is formation of a suture granuloma.

A 75 year old, nulligravida, widow and post- menopausal, 2 months after a Fothergill’s repair for III° uterovaginal descent and  squamous metaplasia with chronic cervicitis, a controlled hypertensive presented in the Gynecology OPD with intermittent, purulent, reddish vaginal discharge. She despite being 75 year old underwent a Fothergill’s repair for a III° uterovaginal descent instead of a vaginal hysterectomy with site specific repair as it was not possible to open her posterior cul de sac peritoneum due to dense adhesions caused by a previous prolapse surgery. Details of her previous surgery that she underwent about 30 years ago were not available. In her preoperative assessment fixity and scarring in the posterior fornix was noted. Her cervical length was 8 cm. Prior to the surgery she had been explained about the possibility of failure to complete the proposed hysterectomy procedure and with such an eventuality a conservative Fothergill’s surgery would be performed. The Fothergill’s stitch was taken with a non aborbable linen suture. After the surgery the patient complained of intermittent, purulent, reddish vaginal discharge. Initially patient was evaluated and treated with povidone iodine vaginal pessary but was not relieved. Patient gave no history of pain in abdomen, fever or any bowel or bladder complaints. Patient was not sexually active. On speculum examination a fleshy mass arising from the neocervix suggestive of granulation tissue was seen. Linen sutures were seen and the mass was bleeding on touch. There was no foul smelling discharge. Linen sutures and granulation tissue were removed and base of the granulation tissue was cauterized with monopolar cautery. Her histopathology report showed predominantly proliferating blood vessels with plump endothelial cells, mixed inflammatory cells consisting of lymphocytes, plasma cells, macrophages and neutrophilic abscesses. The report was consistent with granulation tissue. There was no evidence of atypical cells or malignancy. Patient followed up with complete relief of symptoms after a fortnight. 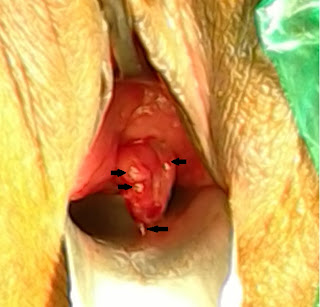 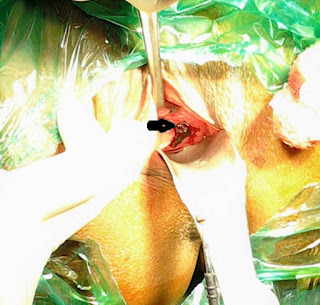 Figure 2: Cauterised Base of the Granuloma (Black arrow). 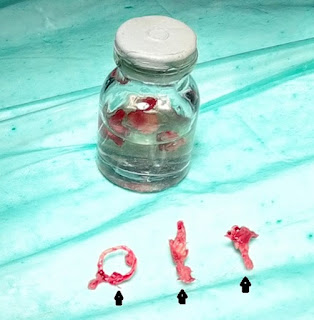 The physiology of wound healing has traditionally been segmented into 3 phases: inflammation (onset of injury to 4-6 days), proliferation (4-14 days) and remodeling (1 week-1 year).[1] The presence of foreign bodies (suture material) in wounds induces excess inflammatory tissue and interferes with the proliferative phase of wound healing and ultimately leads to excessive scar tissue formation. The degree of tissue reaction in turn depends largely on the chemical nature of physical characteristics of the suture material. [1] To some degree all the sutures will induce a foreign body reaction. In our case linen a non absorbable suture material made of long staple flax fibers and that remains encapsulated in body tissues and elicits moderate tissue reaction was used.[2] Linen here was used for fixation of the uterosacral ligaments to the anterior part of the cervix to function as the Fothergill’s stitch. Suture granuloma or ‘spitting suture’ may present after 1-4 months at sites where sutures are left in place for more than 10 days. Soon after surgery as early as the 10th post operative day the granuloma mass may show a protruding suture material.[3] Post operatively suture granulomas have been reported in head and neck surgery[4], abdominal wall[5], lungs[6], ovaries[7], inguinal areas[8] and post-vaginal hysterectomy in vagina[9]. Suture granulomas also are notorious in mimicking cancers by showing false positive FDG-PET(fluoro deoxyglucose positron emission tomography) results.[10]
For the prevention of suture granulomas:
The essence of proper treatment of suture granulomas is correct diagnosis. The treatment options range from only observation, simple excision of the tissue and the suture with a No.10 scalpel blade, electrocauterisation or application of hot compress 3-4 times a day for skin granulomas where the sutures will ultimately be expelled and heal without incident.[3]

Regardless of the cause, suture granulomas are a nuisance for the surgeon and the patient but fortunately being a benign condition have good results on timely diagnosis and proper treatment.