Torsion Of The Normal Adnexa

Mehta N*, Gupta AS**, Thakur H***, Samant PY****
(*First Year Resident Doctor, ** Professor, *** Assistant Professor, **** Associate Professor, Department of Obstetrics and Gynecology, Seth GS Medical College & KEM Hospital, Mumbai, India.)
Abstract
Adnexal torsion is an uncommon event in adolescents. There may also be isolated torsion of either ovary or fallopian tube. Owing to limitations in diagnostic and imaging modalities to make an accurate diagnosis in these cases, they are often misdiagnosed, or diagnosed only on exploratory laparotomy. We report a case of right adnexal torsion in a 17 year old girl.
Introduction
Adnexal torsion is a rare gynaecological emergency in adolescents. It could also be isolated fallopian tube or ovarian torsion. Ovarian torsion is generally associated with ovarian masses, most commonly mature cystic teratoma[1]. Isolated torsion of the fallopian tube is a rare finding, often misdiagnosed. It occurs without ipsilateral ovarian involvement in conditions such as pregnancy, hydrosalpinx, ovarian or paraovarian cysts and other adnexal alterations, or even with an otherwise normal fallopian tube. Adnexal torsion should be considered in the differential diagnosis of patients with acute abdomen. Sudden onset with sharp, colicky pelvic pain, associated with nausea, vomiting, bladder or bowel symptoms is the usual presentation. We present a rare case in which the patient presented with symptoms of acute abdomen. The ultrasonography report was suggestive of ovarian torsion, but on exploratory laparotomy a cystic lesion of the fallopian tube, with torsion was found.
Case Report
A 17 year old unmarried girl presented with acute pain in the right side of lower abdomen since 3 hours accompanied by 4 episodes of vomiting. She was not sexually active. On examination her general condition was fair, pulse was 96 beats per minute and blood pressure was normal. On abdominal examination a tender ill-defined mass of about 3- 4 cm diameter was felt in the right iliac fossa. Bimanual vaginal or rectal examination was not done due to patient’s discomfort. All routine blood investigations were within normal limits. Abdominal ultrasonography was suggestive of torsion of right ovarian cyst with mild ascites. The patient underwent emergency exploratory laparotomy. Intraoperatively, right sided gangrenous hydrosalpinx of size 8×10 cm was noticed. Right ovary was enlarged, and congested, with some whitish area of viable ovarian tissue seen at the base of the ovary. 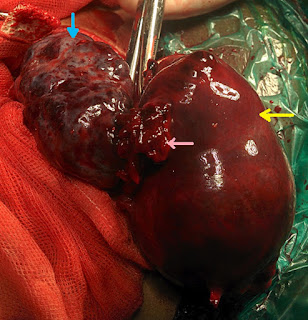 Figure 1. Large gangrenous hydrosalpinx (yellow arrow) and viable (white areas) ovary (blue arrow) and fimbria (pink arrow).
There were three turns on the utero-ovarian ligament, which were untwisted. The congested, gangrenous hydrosalpinx was excised and sent for histopathology. There was no evidence of tuberculosis. The ovary had tears due to the congestion. The ovarian tissue edges were actively bleeding indicating its viability. The tears were sutured with horizontal mattress sutures, the capsule was sutured with a continuous suture of polypropylene No. 2-0. The uterus and left sided adnexa were normal. Postoperative recovery was normal. Histopathology report of the fallopian tube specimen showed distension of the fallopian tube with blood, venous congestion of the tubal walls, hemorrhagic necrosis. Focally tubal lining epithelium was appreciated surrounded by dense hemorrhage.
Discussion
Adnexal torsion is a gynecological emergency. It occurs most commonly in women of reproductive age group, but may also be seen in premenarchal girls or postmenopausal women.[1] Torsion of the fallopian tube is a rare entity, occurring in 1 in 1.5 million women.[2] Torsion of the adnexa is reportedly more common on the right side (3:2), possibly due to either the sigmoid colon on the left that limits movement or hyper-mobility of the cecum on the right that is more permissive to movement.[1] Hydrosalpinx is one of the predisposing factors of adnexal torsion. However, because the incidence of hydrosalpinx in adolescent girls is low, it may cause diagnostic dilemma. It is rarely diagnosed preoperatively due to its rarity, lack of definitive diagnostic signs and similarity to other cases of acute abdomen.[3] Para ovarian or para tubal cysts and borderline para tubal cysts may also present similarly clinically, hence must be considered in the differential diagnosis. Borderline para tubal cysts are defined as epithelial proliferation without stromal invasion. These are rare tumors, which have only been found in literature.[4] Also, on ultrasonography, a hydrosalpinx is difficult to diagnose and it may be confused with simple ovarian cysts, Para ovarian cysts and peritoneal inclusion cysts.[4] A delay in management can lead to catastrophic complications. Complications of adnexal torsion include hemorrhagic shock and anemia, adnexal necrosis leading to infection and leucocytosis, peritonitis.[1][5] Early surgical intervention helps in salvaging the adnexa and preventing further complications.[1]
Our patient was a 17 year old who presented with acute right sided lower abdominal pain and tenderness. Her ultrasonography report was suggestive of ovarian torsion, but on exploratory laparotomy torsion of the fallopian tube with hydrosalpinx was found. The gangrenous fallopian tube was removed. Ovarian reconstruction was done, as the ovary was still viable. The patient had not been sexually active and did not have pelvic infection. Hence there was no reason for development of a hydrosalpinx. Pathological examination showed that there was distension of the tube with blood, and the walls of the tube were congested. So it was a venous infarct due to torsion cutting off the venous flow, while maintaining arterial flow, until the torsion progressed so much that even the arterial blood flow was cut off. We postulate that the normal adnexa underwent torsion and the hydrosalpinx was secondary to the venous infarct and not the primary cause of the torsion.
Conclusion
Adnexal torsion, though rare, should be considered as a differential diagnosis in female patients presenting with acute abdomen. Since imaging modalities are not very accurate in diagnosis, early laparotomy or laparoscopy can not only help preserve the fallopian tube, but it can also prevent unnecessary oophorectomy and preserve reproductive function.
References
Citation