Adult granulosa cell tumors (AGCTs) accountfor 95% of all granular cell tumors and 1 - 2% of all ovarian tumors.[1] Prognosis mainly depends on the stage of the tumor and its mitotic index. These tumors have a propensity to recur many years after the initial diagnosis. We present a case of a 26 year old nulligravida havinga large adnexal mass with hemorrhage within for which she underwentan emergency exploratory laparotomy with right salpingo-oophorectomywhich on histopathology was diagnosed to be an AGCT of the right ovary.

Granulosa cell tumors (GCTs) of the ovaries originate from sex cord stromal cells. Based on histological appearances they are further classified as adult cell granulosa cell tumor and juvenile granulosa cell tumors (JGCTs). AGCT is the more common variety and seen in women in the reproductive age group or postmenopausal period. They have a peak incidence at 50 - 55 years of age and are more common in postmenopausal women than premenopausal. AGCT is primarily treated surgically while radiotherapy and chemotherapy are mainly used for recurrent tumors. GCTs are usually diagnosed at an early stage and have a favorable prognosis.

A 26 years old woman, married since 4 years, known case of primary infertility was referred to our institutionwith possible ongoing hemorrhage within an ovarian tumor, with a sudden fall in hemoglobin from 8g% to 6 g%, for emergency exploratory laparotomy. At the time of admission, she was pale but her vital parameters were normal. On per abdominal examination, there was a 32 weeks size mass arising from the pelvis with a firm to cystic consistency and generalized tendernessall over the abdomen. On per vaginal examination, the cervix was high up, pushed anteriorly and the uterus could not be felt separately from the mass. The mass occupied both the lateral and posterior fornices. On per rectal examination, the rectal mucosa was free from the mass. The rest of the systemic examination was unremarkable.
The patient complained of a lump in abdomen, first noticed two months ago, which was gradually increasing in size and initially painless. USG done two months ago was suggestive of a 15 x 6cm enlarged ovary with multiple enlarged follicles, the largest measuring 7cm and appearing to be a complex cyst, with suspicion of ovarian hyper stimulation syndrome in view of history of ovulation induction for one cycle by clomiphene citrate two months prior to the onset of symptoms. She also had a history of irregular menses since attaining menarche, menstruating every 1.5 to 2 months for which she intermittently took oral contraceptive pills. She was admitted at the referring hospital for evaluation in view of the above report. Her serum levels of CA-125, alpha-fetoprotein and carcinoembryonic antigen were normal. As her vital parameters were stable and a repeat USG after one week showed no change in the size of the ovarian mass, she was discharged, asked to undergo a CT scan and follow up for an elective surgical resection of the mass. CT scan of the abdomen and pelvis done a month later was suggestive of a large right ovarian mass measuring 19.8 x 16.6 x 8.5cm with a possibility of ovarian torsion and less likelihood of ovarian hyperstimulation syndrome. There was a mild left pleural effusion and minimal free fluid in the abdomen and pelvis. However, she did not have any fresh complaints and hence did not follow up at the hospital.A month later,she was re-admitted at the referring hospital with complaints of increasing size of the mass, persistent pain in abdomen and fever. In view of a sudden fall in the hemoglobin from 8g%, as on admission, to 6g% overnight and an increase in the height of the mass per abdominally, hemorrhage within the tumor was suspected and she was referred to our institution for emergency exploratory laparotomy. On admission at our institution, USG pelvis with Doppler studiesshowed a 27x18x14cm multicystic, midline ovarian mass likely to be a hemorrhagic cyst with no evidence of torsion. CT scan of the abdomen and pelvis was suggestive of a 25x20x11cm solid-cystic lesion with enhancing septae and hemorrhagic areas within.
After transfusing two units of packed red cells pre-operatively and intra-operatively, an emergency exploratory laparotomy was undertaken under general with epidural anesthesia through a midline vertical incision which had to be extended from the xiphisternum up to the symphysis pubis in view of the large size of the mass. Intra-operatively, a large cyst of 24x21x10cm with the right fallopian tube stretched over itwas seen extending into the epigastrium while the left fallopian tube, left ovary and the uterus were normal. No evident metastatic deposits or lymphadenopathy were seen. A right salpingo-oophorectomy was done and the specimen along with a peritoneal fluid sample was sent for histopathological and cytological examination respectively. Grossly, the capsule of the mass looked intact. On cut section, the cyst was biloculated, containing hemorrhagic fluid and gelatinous areas within with solid areas present focally. On microscopy, the tumor cells were round to oval and focal spindle shaped cells having vesicular nuclei with undulating margins and nuclear grooves were seen. Call Exner bodies were noted. Areas of hemorrhage and necrosis were present. Capsule was intact. The peritoneal fluid did not contain any malignant cells. Thus, a diagnosis of adult granulosa cell tumor with stage I was made. She was referred to a specialized cancer institute for further management where the diagnosis of adult granulosa cell tumor of the ovary was confirmed on histopathology. She was advised to avoid conception for one year and to follow up regularly at the institute. 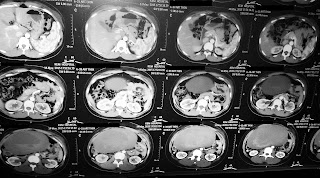 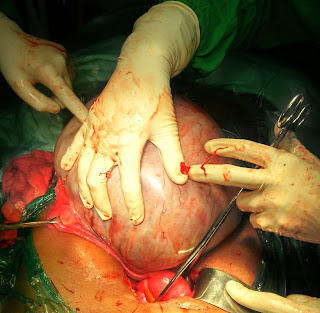 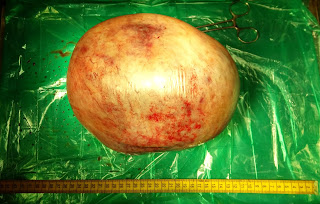 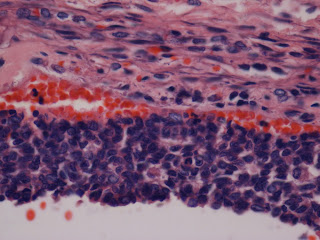 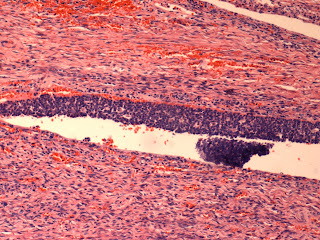 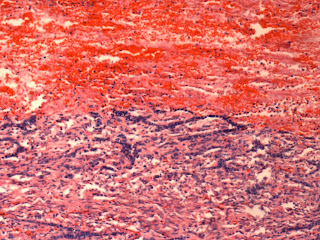 
Granulosa cell tumors are sex-cord stromal tumors of the ovary with malignant potential that can occur in women of all age groups. The juvenile granulosa cell tumors are usually seen in pre-pubertal girls while adult granulosa cell tumors are more commonly found in postmenopausal women than those in the reproductive age group. These patients may present with abdominal mass, abdominal distension or menstrual irregularities. As GCTs are often hormone producing, they may present with manifestations of hyper-estrogenemia such as precocious puberty in pre-pubertal girls and abnormal uterine bleeding or postmenopausal bleeding in older women. There may be a concomitant endometrial pathology like endometrial hyperplasia in 25 -50% or endometrial adenocarcinoma in up to 5-10% of the patients.[2] AGCTs may also be virilizing presenting with hirsutism, clitoromegaly, amenorrhea and deepening of voice. On examination, a pelvic mass is almost always present. On imaging they appear as round to ovoid masses that are multicystic, occasionally with solid components or less often as unilocular simple or complex cysts or even homogenous solid masses. Tumor markers such as serum inhibin levels and serum antimullerian hormone (AMH) levels are being studied and used for diagnosis and follow up of patients.[3,4]
Prognosis largely depends on the surgical stage of the tumor, mitotic index and nuclear atypia. Due to its relatively early manifestation, 80-90% are diagnosed at stage I and hence have a better prognosis than most other ovarian tumors.[5] Primary treatment modality for GCTs is surgical and choice of the surgery is determined by the age of the patient and need for fertility preservation. For patients in the pre-pubertal and reproductive age group with stage I disease, a unilateral salpingo-oophorectomy is preferred, as in our case. In cases of a higher stage of disease and post-menopausal women, a total abdominal hysterectomy with bilateral salpingo-oophorectomy is undertaken.
These tumors have a tendency to recur many years after the primary diagnosis, thus regular follow-up with physical examination and tumor markers like inhibin, AMH and estradiol is essential.
In conclusion, adult granulosa cell tumors have a better prognosis than most other ovarian malignancies, stage of disease being the most important prognostic factor. Surgical clearance of the tumor is the main-stay of treatment. Emphasis must be laid on the need for long term follow-up in view of recurrences that occur several years after the initial disease.