An Unusual Case of Vomiting in Pregnancy and Fetal Loss

Intestinal malrotation is a congenital condition that rarely may present in adults with intestinal obstruction. We report here a case of pregnant lady with 3 previous abortions in 2nd trimester who presented with symptoms of small bowel obstruction. Imaging by MRI enterography revealed that the duodenojejunal (DJ) junction was on the right of midline, jejunal loops on right side and cecum in midline. Superior mesenteric vein (SMV) was to the left of Superior mesenteric artery (SMA) suggestive of nonrotation of midgut. Corrective surgery was done (Ladd procedure) uneventfully after an MTP. Patient had a subsequent successful pregnancy.

30-year-old lady, 4th time pregnant with 3 previous abortions presented to us in the 5th month of gestation with large quantity bilious vomiting since 1 month. She also had 2 kg weight loss during present pregnancy. She was treated with ondansetron, doxylamine, metoclopramide and domperidone without any relief. She had similar complaints in all her previous pregnancies and each time had abortion during 2nd or 3rd trimester. The weight lost during each pregnancy was regained after abortion. She was dehydrated and hypotensive this time on admission. On Investigations, there was iron deficiency anemia, raised blood urea and nitrogen. Her serum amylase, lipase, liver function tests, fundoscopy, βhCG, TSH, prothrombin and autoimmune workup were normal. Ultrasound of abdomen showed dilated duodenum and stomach with excessive peristalsis of bowel loops in right iliac fossa. Endoscopy showed dilated stomach and duodenum till D3.
MRI enterography was done to evaluate the bowel and it showed that the duodenojejunal (DJ) junction was on the right of midline, jejunal loops on right side and cecum in midline (Figure 1). Superior mesenteric vein (SMV) was to the left of Superior mesenteric artery (SMA) suggestive of nonrotation of midgut (Figure 2). Incidentally seen was intraventricular with intraparenchymal hemorrhage in the fetus (Figure 3).
Medical Termination of Pregnancy (MTP) was done in view of major fetal abnormalities. Post MTP symptoms improved within a day. Corrective surgery was done (Ladd procedure) uneventfully (Figure 4). A year later the patient conceived, remained asymptomatic throughout pregnancy and successfully delivered a baby. 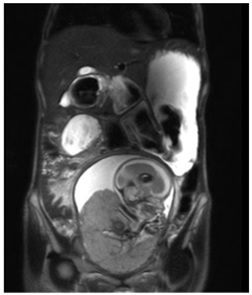 Figure 1. MR enterography showing DJ junction on right of midline and jejunal loops on right side of abdominal cavity. 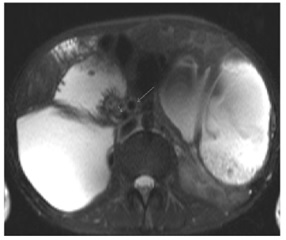 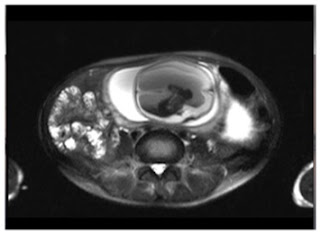 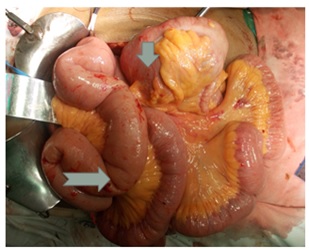 Figure 4. Surgery showed cecum (small arrow) in the midline and jejunal loops (long arrow) on the right side of abdominal cavity.

Intestinal rotation and positioning occur in the fetus during early gestation. By the fifth week, the intestine is outside the abdomen and completes a full 2700 rotation with return into the abdominal cavity by the end of the first trimester. If any step of this process gets arrested, then it results in intestinal anomalies which can result in marked morbidity and mortality.[8]
Most patients are symptomatic early in life, and rarely present later in life.[9] Vomiting is a common presenting complaint, but chronic or intermittent abdominal pain, malabsorption, diarrhea, food intolerance, common bile duct obstruction or chylous ascites may also occur.[10]
Like in our patient, symptoms from malrotation may occur during pregnancy due to enlarging uterus pushing the non-fixed, mobile portions of the bowel into the upper abdomen.[ 8 ] The symptoms are likely to be more frequent and severe in the last trimester of pregnancy.[11] In a study of volvulus occurring during pregnancy, two patients presented during the first trimester, nine during the second trimester, and 25 in the third trimester, including eight at term; while five women presented postpartum.[12]
The diagnosis of malrotation often is not considered in the pregnant patient as symptoms are often nonspecific and abdominal findings may be difficult to interpret because of the size of the gravid uterus. In addition, intestinal obstruction is infrequent during pregnancy, occurring in one of 30,000-60,000 deliveries and is usually due to adhesions rather than malrotation . Avoidance of radiology studies during pregnancy may also contribute to delayed diagnosis.
Ultrasound or magnetic resonance imaging like in our patient may be useful during pregnancy in demonstrating abnormal positioning of the mesenteric vessels suggesting midgut malrotation, or fluid-filled, dilated duodenum and should be considered in presence of unexplained GI symptoms. Treatment of this abnormality is surgical – Ladd procedure, which involves division of Ladd's bands followed by widening of the small intestinal mesentery, performing an appendectomy and correct placement of the cecum and colon and should be recommended even in patients who are asymptomatic and in whom the malrotation is serendipitously discovered.[8]
Pregnancy can induce volvulus/obstruction in an asymptomatic patient with intestinal malrotation. Intestinal malrotation may by itself lead to recurrent pregnancy losses since our patient conceived successfully post-surgery.
In our patient intestinal malrotation was the cause of recurrent vomiting and pregnancy loss during previous pregnancies and correction of which lead to an uneventful pregnancy and successful delivery.

This case emphasizes the need to search for intestinal malrotation in patients with unexplained vomiting during pregnancy.