A girl can present with primary amenorrhea, which may be due to cryptomenorrhea due to an obstruction of the genital outflow tract. In presence of normal genital tract, there can be a number of causes. We present a case in which there was cervical and vaginal aplasia combined with an end organ (endometrial) defect. This is the first case of this type in the world literature.

Primary amenorrhea can be due to a number of causes. Cryptomenorrhea could be a cause of a primary absence of menstruation associated with an outflow tract obstruction of the genital tract. In presence of normal anatomy of the genital tract, primary amenorrhea can occur due to genital tuberculosis. We present a case in which there was aplasia of the vagina and the cervix, normal uterine corpus, normal appearance endometrial shadow on ultrasonography (USG) and no cryptomenorrhea. Possible etiology of the condition is discussed.

An 18 year old unmarried woman presented with primary amenorrhea. She had a history of cyclical lower abdominal pain for 3 to 4 years. It was experienced every month, lasting for 2 to 3 days every time. There was no history of any bleeding per vaginum or leucorrhea. There were no bladder or bowel complaints. The breast development had occurred at the age of 13 years, and axillary and pubic hair development had occurred at the age of 12 years. There was no history suggestive of any medical disorder including tuberculosis, or any endocrine disorder. Her mother had menarche at the age of 12 years. Her vital parameters were normal and general and systemic examination revealed no abnormality. Breasts development of Tanner's stage 5. There was no galactorrhea. Axillary and pubic hair development was stage 5. Thyroid was normal. There was no hirsutism. There was no abnormality on abdominal examination. Local examination showed an absence of vagina. There was a shallow dimple at the position of the expected vaginal opening. External genitals were normal. Rectal examination showed a normal sized uterus. There was no pelvic tenderness or mass. Abdominopelvic ultrasonography showed uterus measuring 6x3.9x2.8 cm, central endometrial echo measuring 8.1 mm, 2x1.7 cm sized cyst in the right ovary, 2.3x1.9 cm cyst in the left ovary, normal kidneys, and no fluid in the pelvis or uterine cavity. There was no vagina. Her hemogram, thyroid, liver and renal function tests, serum prolactin level,and chest radiograph were normal. 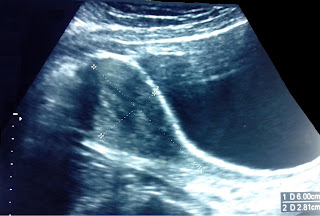 Figure 1. USG of the pelvis showing normal uterus with endometrial echo, and absence of cervix and vagina.

A laparoscopy was performed under general anesthesia. The uterus was of normal size and shape. The fallopian tubes and ovaries were normal. Uterine ligaments were normal. Cervix was not seen producing an elevation on the anterior wall of the pouch of , between the uterosacral ligaments. Mild inflammatory fibrosis and a thin band of adhesion was seen around the left ovary. No endometriosis was seen anywhere. Bowel, bladder, omentum and liver were normal. There was no evidence of tuberculosis. The patient made an uneventful recovery. TB Gold test was performed on her postoperatively. Its result was negative. The woman was counseled and offered vaginoplasty and creation of an opening in the lower end of the uterus into the neovagina. She opted to undergo that when she planned to get married.

In a woman with an outflow tract obstruction in the form of imperforate hymen, vaginal agenesis or atresia, cervical atresia or agenesis, the patient suffers from cryptomenorrhea.[1,2] The menstrual blood collects behind the site of the obstruction and distends the genital tract, producing hematocolpos (if the obstruction is in the vagina or at the introitus),  hematocervix (if the obstruction is below the level of the internal os), and hematometra. Usually the patient presents early, with cyclical lower abdominal pain, and often retention of urine due to elevation of the bladder neck and elongation of the urethra. The endometrium is functional, and recovery is complete when the obstruction is relieved surgically. There can be residual complication in the form of pelvic endometriosis. Primary amenorrhea can be a presenting feature of genital tuberculosis, though secondary amenorrhea is far more common.[3,4,5] The amenorrhea is due to an end organ failure, the endometrium being destroyed by tuberculous inflammation and often being replaced by fibrous tissue.[6]

In the case presented, the woman had cervical and vaginal agenesis, while the uterine corpus was normally developed and had normal endometrial shadow on ultrasonography. Thus she should have been menstruating and had cryptomenorrhea. But there was no fluid in the uterine cavity. This would be possible only if there was end organ defect in the form of endometrial destruction due to tuberculosis. If she had contacted the disease in early childhood, then the genital infection could have manifested before menarche, and then she would have primary amenorrhea, but no cryptomenorrhea. But all investigations failed to reveal the presence of tuberculosis. It is possible that she still had tuberculosis in the endometrium, which could not be sampled for histopathological examination and TB-PCR test. The other possibility was Leon Israel syndrome. It is a rare disorder, with only seven cases in the world literature. The condition is characterized by normal uterus, normal ovulation, primary amenorrhea, and successful pregnancies without any treatment. The defect is believed to be an absence of a proteolytic enzyme in the endometrium, which prevents the normal breakdown of the endometrium at the time of the menstruation, which gets resorbed and then grows again in the next cycle.[7,8] Owing to rarity of the condition, the patient presented is more likely to have genital tuberculosis rather than Leon Israel syndrome. The chronic inflammatory lesions on the left side adnexa would support the diagnosis. The final diagnosis may be possible when the woman plans to get married and undergoes a vaginoplasty, with creation of an opening in the lower end of the uterus communicating with the neovagina. The endometrium can be curetted at that time and studied histologically as well as by TB-PCR test.