Intraperitoneal calcification is an uncommon condition. It may be due to any one of a large number of conditions. All of these conditions are important. Unless a correct diagnosis is made in time and treatment is given, there can be serious consequences for the patient. A case of abdominal tuberculosis with an unusual presentation is presented.

Extensive intraperitoneal calcification is the result of chronic irritation of peritoneum, as seen with tuberculosis,[1,2,3] chronic peritoneal dialysis,[4,5,6] rupture of an ovarian benign cystic teratoma,[7,8] hyperparathyroidism,[9] use of iodinated contrast material,[10] primary peritoneal serous psammocarcinoma,[11] and metastases to peritoneum from ovarian serous cystadenocarcinoma.[12] Some of these patients have symptoms and signs of the disease causing the calcification, while the others are asymptomatic. Such calcifications are rarely benign. Extensive evaluation may be required before a diagnosis can be made. A case of tuberculosis causing extensive peritoneal calcification is presented.

A 25 year old woman presented with primary infertility. She had been diagnosed to have had a silent rupture of an ovarian benign cystic teratoma causing extensive intraperitoneal calcification on hysterosalpingography by another doctor (figure 1). 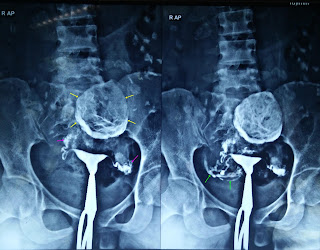 Figure 1. Hysterosalpingogram showing extensive intraperitoneal calcification. A large calcific shadow is seen above the uterus, on the left side of the midline (yellow arrows). The uterus is of normal size and shape. Both the fallopian tubes are blocked in the ampullary portions (pink arrows). There is venous intravasation of the dye (green arrows).

She had been married for four years and had not used any contraception at any time. Her menstrual cycles were regular, every 28 days, mildly painful, and with a moderate flow. There was no history of tuberculosis or contact with tuberculosis. There was no history of an acute abdomen in the past, which would have been expected in case of a rupture of an ovarian benign cystic teratoma. There were no bowel and bladder complaints. There was no history of chronic renal disease or peritoneal dialysis. There was no history suggestive of hyperparathyroidism. She had not undergone any operative procedure.. Her general and systemic examination revealed no abnormality. The breasts were normal. Abdominal examination revealed a firm, nontender mass measuring 3-4 cm in diameter, below and to the left of the umbilicus. The uterus was of normal size and mobile on bimanual pelvic examination. There was no adnexal mass. Speculum examination of the vagina revealed no abnormality. Her hemogram, urinalysis, fasting and postprandial blood sugar levels, liver and renal function tests including electrolyte levels showed no abnormality. Chest radiograph was normal. A contrast enhanced computerized tomography (CECT) was performed on her. It showed a calcific mass measuring 4 cm in diameter below the anterior abdominal wall below the level of the umbilicus, and scattered calcific lesions within the peritoneal cavity. The liver, spleen and gastrointestinal tract were normal. The left kidney was normal while the right kidney was absent. A sliding test was done, which showed no adhesions of bowel or omentum to the anterior abdominal wall.[13] 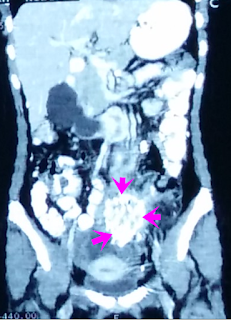 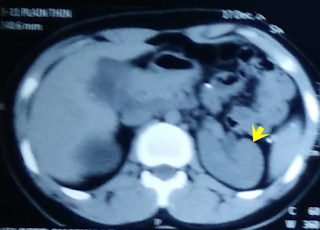 Figure 3. CECT of abdomen and pelvis, transverse view. Left kidney (arrow) is seen, while the right kidney is absent.

A provisional diagnosis of abdominal tuberculosis was made, with a differential diagnosis of silent rupture of a benign cystic teratoma of an ovary. An open laparoscopy with Hassan’s technique was performed. It showed pelvic and intraperitoneal adhesions and scattered calcific nodules measuring 4 to 6 mm in diameter. A minilaparotomy was performed. A 4-5 cm diameter irregular cheesy mass was removed from omentum. Two calcific nodules were also removed. Bilateral tuboovarian masses were detected. Chromopertubation showed intravasation of methylene blue into the myometrium and no spill through the fallopian tubes. Bowel appeared normal. The abdomen was closed. The patient made an uneventful recovery. Histopathological examination of the cheesy mass confirmed the diagnosis of tuberculosis. The patient was put on antituberculous therapy and counseled to undergo in vitro fertilization and embryo transfer after completion of the antituberculous therapy, or adopt a child. 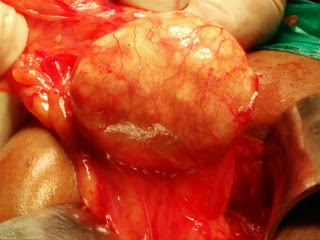 When a patient has a disease that can cause extensive intraperitoneal adhesions, finding the same comes as no surprise and it usually does not alter the course of the treatment. Chronic peritoneal dialysis is an example of such a situation. But when it is accidentally discovered when the patient is being investigated for some other reason, it needs to be evaluated critically. Such a patient can suffering from a serious disorder like tuberculosis, rupture of an ovarian benign cystic teratoma, hyperparathyroidism, psammocarcinoma, carcinomatosis, and metastases to peritoneum from ovarian serous cystadenocarcinoma. Ultrasonography, CECT and magnetic resonance imaging can help differentiate the conditions to a large extent. Hyperparathyroidism requires assay of serum calcium and parathormone for diagnosis. The final diagnosis may require histopathological examination of the lesion, the tissue being obtained by laparoscopy or laparotomy. A viscera sliding test is recommended to diagnose adhesions of bowel and/or omentum to the anterior abdominal wall.[13] An open laparoscopy is recommended to avoid injury bowel and/or omentum to the anterior abdominal wall prior to a laparoscopy or laparotomy.[14]

In the case presented, a negative history ruled out chronic renal disease treated with peritoneal dialyses and radiographic study with iodinated contrast material. It made the diagnosis of a silent rupture of a benign cystic teratoma of an ovary unlikely. An absence of any abdominal abnormality made primary peritoneal malignancy unlikely. Absence of an ovarian tumor on ultrasonography and CECT made metastases from an ovarian papillary serous cystadenocarcinoma unlikely. This tuberculosis was the most likely diagnosis. It was confirmed by histopathological examination of a lesion in the omentum. What made the case unusual was that there was no involvement of the bowel with peritoneal tuberculosis, no significant intraperitoneal adhesions, and presence of only scattered calcific lesions which did not affect the function of the abdominal organs in any adverse way. Her infertility was the result of genital tuberculosis. It is possible that she has a tuberculous pyosalpinx, which leaked into the peritoneal cavity and produced scattered lesions all over the peritoneal cavity.

I thank Dr Neha Agrawal for taking pictures of the imaging films and intraoperative findings.