Good exposure and better surgical detail are possible by laparoscopy, also, minimal blood loss and excessive abdominal packing and bowel manipulation are not required thus making it an excellent method for pelvic floor surgery. Laparoscopic repair of vaginal prolapse may be difficult, as extensive dissection and suturing skills are needed. However laparoscopy shows similar results to an open abdominal sacrocolpopexy, such as less recurrence rates and also less dyspareunia as compared to sacrospinous fixation, as well as the benefit of reduced morbidity with a laparoscopic approach.

Laparoscopy produces better vision, exposure and surgical detail, decreased blood loss and also the need for excessive abdominal packing and bowel handling is reduced, which all lead to lesser morbidity. Surgical repair of level I or apical vaginal prolapse can be performed either vaginally or via abdominal route.[1] Randomized controlled trials however, have shown that an abdominal open sacrocolpopexy has lower recurrence rates and less incidence of dyspareunia than that of a vaginally approached sacrospinous fixation, although at the expense of a longer recovery time.[2] Thus, a laparoscopic approach of sacrocolpopexy reduces the morbidity compared with an open procedure. However, the laparoscopic approach involves extensive dissection and needs advanced suturing skills, limiting this as a procedure beyond the reach of the average gynecologist.

A 52 yr old female patient came to our OPD with the chief complaints of discomfort in the perineum due to something coming out of the vagina. She had undergone a total abdominal hysterectomy 10 years ago. On examination, a vault prolapse was confirmed. A laparoscopic approach was planned. Meticulous laparoscopic dissection of bladder and rectum was done off the vaginal vault. A Y shaped mesh was placed over the vault. Anterior leaf of the mesh was placed over anterior vaginal wall, posterior leaf was placed on posterior vaginal wall. 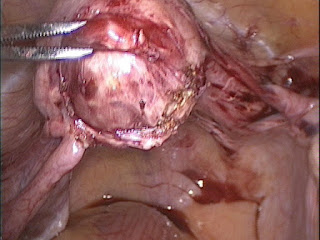 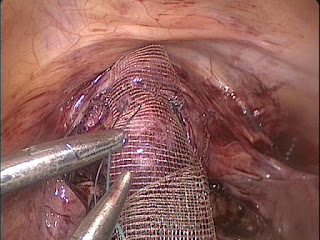 Figure 2. Suturing the mesh to the anterior vaginal surface

After carefully identifying L5- S1, the common iliac veins and ureters, the dissection of the promontory was started. Initially the pre-vertebral parietal peritoneum was incised vertically. After incising, the retroperitoneal fat was dissected to allow exposure of the anterior longitudinal ligament. An area was dissected on the promontory from the midline, large enough for fixing the mesh. Problems in this area include oozing from the median sacral vessels; hence bipolar forceps was used for hemostasis. The peritoneal incision at the promontory was then extended over the rectosigmoid to continue over the deep part of the cul-de-sac, opening the rectovaginal and vesicovaginal spaces. The long arm of Y of the mesh was anchored to the sacral promontory with 2-0 synthetic non-absorbable multifilament suture. Following this, complete extra-peritonization of the mesh was done. 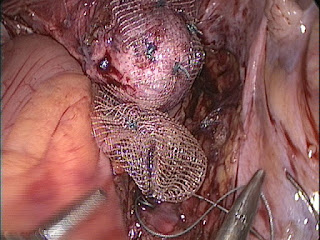 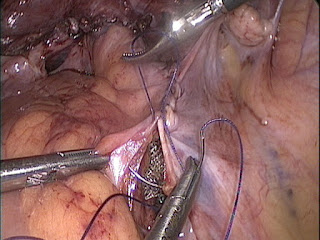 According to a recent Cochrane meta-analysis [3], abdominal sacrocolpopexy is associated with a lower rate of a recurrent vault prolapse and also associated with decreased dyspareunia as compared to vaginal sacrospinous colpopexy. The longer recovery of the abdominal approach, compared to the vaginal surgery could be counterbalanced using laparoscopic approach.[4]
In the absence of controlled randomized studies comparing open and laparoscopic sacrocolpopexy, some retrospective studies have found that the two procedures have comparable clinical outcomes. After comparison, though the surgical time is longer in the laparoscopic group, less hospital stay, postoperative pain and blood loss are in favor of laparoscopy.[4, 5] Strong laparoscopic suturing and knot tying skills are necessary in performing this procedure. It is classified as “slightly difficult” procedure (the degree of difficulty being 3/5). [6]
In conclusion, this technique requires good knowledge of anatomical landmarks and laparoscopic dissection along with laparoscopic suturing; these are skills that surgeons who practice laparoscopy already have and which can be easily acquired and learned by others.