Primary leiomyosarcoma of the broad ligament is an extremely rare tumor with very few cases reported in literature. We herein report a case of postmenopausal lady, diagnosed pre-operatively on ultrasound and CT as a degenerated fibroid/ ovarian tumor. Post operatively histopathological diagnosis proved to be a leiomyosarcoma.

Leiomyosarcoma constitute approximately 5-10 % of all soft tissues sarcomas. By definition true broad ligament leiomyosarcomas occur on or in the broad ligament but are completely separated from and in no way connected with either the uterus or the ovary.[1]

A 60 year old post menopausal woman presented will dull aching pain and swelling of lower abdomen since one year. On examination non tender mass 16*13 cm in the right flank region and hypogastrium was felt. It had restricted mobility. On per vaginal examination uterus was not felt separate from the mass and uterine size could not be made out. Bilateral forniceal fullness was present. Ultrasonography (USG) revealed a well encapsulated, heterogeneous, solid mass 16*13*11 cm in the right adnexa with cystic and necrotic areas within and hyper echoic areas representing hemorrhage. Internal vascularity of low impedance within the lesion was noted. (Figure 1). Uterus was normal with endometrial thickness of 3 mm. Ovaries were not visualized due to atrophy owing to postmenopausal status. CT scan of the abdomen and the pelvis showed a well defined, heterogeneous solid mass lesion arising from the  right adnexa with hyper-dense areas of hemorrhage within. On post contrast study, there was moderate heterogeneous enhancement with hypo-attenuating areas of necrosis. Uterus was displaced to the left. Fat planes were maintained between the mass, uterus and the rectum. Right ovary could not be determined separately. With these background features on ultrasound and computed tomography (CT) scan possible diagnosis of either a degenerating broad ligament fibroid or an ovarian tumor was made. The serum tumor marker levels of CA-125, β HCG, CA 19-9 and CEA were within normal limits. Total abdominal hysterectomy with bilateral sapling-oophorectomy was done. Right broad ligament fibroid 17*15*11 cm in size was removed. (Figure 2). Gross examination of the specimen of the right adnexal mass showed grey white nodular areas of hemorrhage. Microscopy showed tumor cells arranged in intersecting fascicles. Cells were spindle shaped. Mitotic figures seen were 10/10 HPF. There was presence of necrosis. Features were suggestive of leiomyosarcoma. 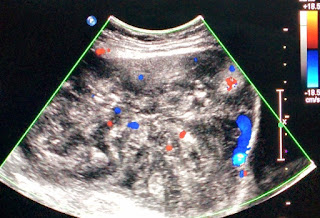 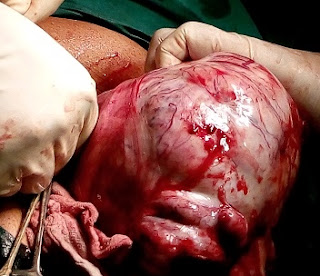 Till now only 24 cases of primary leiomyosarcoma of the broad ligament have been reported in the literature published in English.[2] It is a very rare tumour and a rapidly progressive one. It is also a highly malignant gynecological tumor.[3]  It is a malignant mesenchymal tumor of cells showing smooth muscle differentiation. Distinguishing between leiomyoma and leiomyosarcoma is difficult because of the similar presenting features since leiomyoma can undergo secondary changes which include degeneration, necrosis, hemorrhage, and rarely sarcomatous change.[4] These tumors commonly occur in postmenopausal women.[3,5] The reported cases of primary malignant tumors of the broad ligament are leiomyosarcoma, endometrial stromal sarcoma, malignant fibrous histiocytoma and carcinosarcoma.[6,7] The clinical manifestations of these cases are non specific symptoms and signs that include abdominal pain, distension, nausea, constipation, and malaise. Broad ligament fibroids are associated with pseudo Meigs’ syndrome and they can produce elevated serum marker CA-125 levels, leading to diagnostic confusion with metastatic ovarian carcinoma.[8] Pelvic imaging techniques cannot reliably differentiate between a benign leiomyoma and a sarcomatous degeneration as both can undergo central necrosis.[4] USG features of mixed echogenic parts, central necrosis, and color Doppler findings of irregular vessel distribution, low impedance to flow, can also be seen in a benign leiomyoma.[9] As in our case the USG findings mimicked fibroid with degenerative changes or an ovarian tumor. Due to the anatomical close proximity, these broad ligament fibroids may be confused with adnexal neoplasms. The differential diagnosis include masses from ovarian origin, either benign or malignant, broad ligament cyst, lymphadenopathy and tubo-ovarian masses.[5,10] CT scan does not reliably diagnose between leiomyomas and leiomyosarcomas.[11] Lee et al proposed “ovarian vascular pedicle” as a way of differentiating ovarian neoplasms from adnexal lesions by single detector helical CT scan.[12] Leiomyosarcoma and leiomyoma can be differentiated microscopically by the following criteria. Presence of 5 or more mitotic figures per 10 high power field, nuclear atypia, hyper-cellularity are required to diagnose a leiomyosarcoma.[6] The prognosis for women with uterine sarcoma primarily depends on the extent of the disease at the time of diagnosis and mitotic index.

Broad ligament leiomyosarcoma is difficult to diagnose with clinical and radiological studies, histopathology plays a prime role for making the diagnosis. Because of their rarity, they are not suitable for screening. Surgery is the treatment of choice with postoperative radio and chemotherapy in recommended cases.