Hysteroscopic myomectomy is the procedure of choice nowadays in cases of symptomatic submucous fibroids causing infertility, recurrent reproductive loss or abnormal vaginal bleeding. Hysteroscopic resection of a large submucous fibroid has remained a challenging procedure. Need of using glycine as distension medium and possible thermal damage with monopolar resectoscope are two important disadvantages. We present here our innovative technique of complete removal of submucous fibroid with the combination of bipolar saline resectoscope and 5 mm laparoscopic tenaculum. With this technique, we completely removed intramural portion of the fibroid and retrieved the separated fibroid from the uterus in a patient with primary infertility.

Uterine fibroids are the most common benign solid tumors found in the female genital tract with incidence of 20–25 % in women of reproductive age. They arise from the muscular layer of the uterus. They usually grow towards lower resistance, thus becoming subserous when they grow towards the abdominal cavity, or submucous when they grow inside uterine cavity (5– 10 % of fibroids). Submucous fibroids may present with menorrhagia, colicky dysmenorrhea (as the uterus tries to expel the fibroids), and are believed to cause reproductive failure. Furthermore, these types of fibroids can cause chronic endometritis; they may have a greater risk for malignant change. Obstetric complications may include preterm labor, abnormal presentation, postpartum hemorrhage and puerperal sepsis. Most commonly submucous fibroids are fundal, other sites being anterior, posterior or lateral uterine walls. Small fibroids may arise from the cornual regions, thus obstructing the tubal ostia. Some of them are located at the cervical canal occupying the part of vagina and presenting as fibroid polyps. Hysterectomy and excision by laparotomy were the only modalities used in the past for treatment of symptomatic submucous fibroids. Conservative surgery requires opening the uterine cavity which itself is one of the factors responsible for altering subsequent fertility. Moreover, pelvic adhesions can form hampering tubal or ovarian function. In future, this approach has obstetric repercussions in the form of need to perform cesarean section. Development of hysteroscopy has made submucous fibroids accessible and completely resectable without performing laparotomy.

A 30 year old woman, married since two and half years presented with primary infertility and irregular menses. Her menstrual cycles were irregular since 2 years, at intervals of 15 to 20 days with heavy bleeding at times. She had severe dysmenorrhea. Hormonal profile was within normal limits. Husband’s semen analysis report was normal. On examination, mild pallor was noted. Per abdomen examination revealed normal findings. On per speculum examination, external cervical os was seen as partially opened, otherwise cervix and vagina were normal. On per vaginal examination, uterine size was approximately 8 to 10 weeks and tip of finger could be inserted through the cervix. Uterus was firm, mobile and globular in shape. Her hemoglobin was 9.5 gm % and WBC count was 10,700/ cm3. Other routine biochemical and serological investigations were normal. Ultrasonography showed a well-defined hypoechoic mass within the endometrium measuring 6.7 × 5.4 × 2.3 cm having a small vascular stalk suggestive of submucous fibroid. She underwent hysteroscopic myomectomy under general anesthesia. The cervix was dilated up to No 10 Hegar, and we used bipolar saline resectoscope with normal saline as distension medium; total volume of saline used was 2 liters.. Hysteroscopic finding was that of a type 1 submucous fibroid with attachment at the anterior uterine wall. 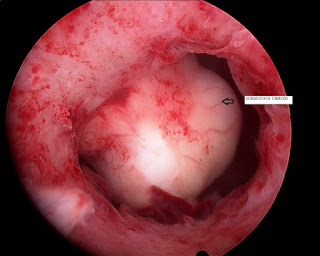 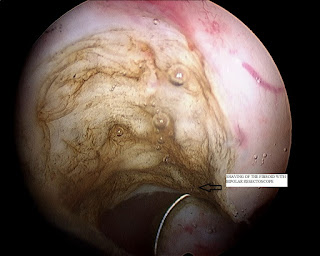 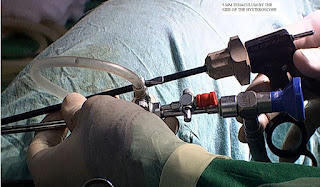 Figure 3. Five mm laparoscopic tenaculum by the side of the hysteroscope. 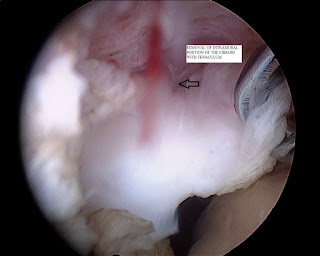 Figure 4. Intramural portion of the fibroid being removed with laparoscopic tenaculum.

Early case reports in the literature date to the mid 60’s and the treatment of submucous fibroids cases have previously been blind dilatation and attempted removal with a ring forceps or a hysterectomy.[1] Verma et al reported ultrasound-guided removal of retained IUDs, as safe and it could be performed in an office setting. [2] Yazicioglu removed the broken tip of Karman canula hysteroscopically from the subvesical space.[3] Hysteroscopic myomectomy using bipolar resectoscope uses normal saline as distension medium instead of glycine which has to be used with monopolar energy. Glycine is a hypotonic fluid which if used in excess can lead to dangerous hyponatremia. This complication can be avoided by using bipolar saline resectoscope. Numerous published reports exist about complications due to glycine extravasation with a rate between 0.1- 2.5 %. [4] This can be a serious complication, especially in older patients or those with heart or renal disease.
Hysteroscopic myomectomy using resectoscope can cause cervical trauma and also damage the underlying and surrounding endometrium. This is avoided by using the 5 mm laparoscopic tenaculum as we approach the uterine wall, avoiding thermal damage to the endometrium. The remaining part of the fibroid can be twisted and removed completely from its capsule with the use of the same tenaculum causing less bleeding. This is of utmost importance in infertile patients as endometrial injury can be caused by the resectoscope while removing the base of the fibroid causing damage to the underlying and surrounding endometrium. Thus, a possibility of Ashermann syndrome is averted. Also it significantly reduces the remote possibility of perforation of the uterine fundus with consequent omental and bowel injury. Using a 5 mm laparoscopic tenaculum by the side of the hysteroscope helps to remove the separated bits smoothly.  Minor leakage occurs alongside the hysteroscope while using tenaculum but that does not compromise the distension or the vision. We are able to grasp the pieces of resected fibroid lying in the cavity with 5 mm laparoscopic tenaculum due to which they could be removed vertically with the least diameter. 5 mm laparoscopic tenaculum is the best instrument available as it ensures firm and continuous grip over the fibroid pieces. Myoma screw cannot be used as it is difficult to maneuver inside the uterine cavity and it cannot grasp small pieces of fibroid. Similarly ovum forceps is also not very useful as retrieval is incomplete, tiresome and it is not under direct vision. Previously the same authors have used the 5 mm laparoscopic tenaculum to retrieve the broken tip of metal suction canula.[5] To conclude, while removing a fibroid hysteroscopically, considering all the advantages, we find it best that most of the fibroid (approximately 70 %) can be removed with a bipolar saline resectoscope with ease. The remaining firmly attached part of the fibroid can be removed with the use of laparoscopic 5mm tenaculum passed alongside the hysteroscope. Also it can be done faster and complete removal is possible using less fluid for distension and lesser chances of pulmonary edema.