Mullerian duct anomalies (MDA) are a group of entities that result from the dysgenesis, defective vertical or lateral fusion, or resorption failure of the Mullerian (paramesonephric) ducts, with an incidence in the general population of 0.001–10%.[1] The theory of unidirectional caudal to cephalad fusion of the Mullerian ducts cannot explain the presence of a single unified uterine fundus with partial septum, two cervices and  a partial longitudinal vaginal septum. Such an anomaly reinforces the alternative bidirectional theory.[2] Most patients with this anomaly are reported to have infertility, dysmenorrhea and recurrent pregnancy loss. Few such cases have been described in literature; however we present a rare case with this anomaly that had a successful obstetric outcome.

MDAs are a group of developmental disorders that involve the internal female reproductive tract. Fusion of Mullerian duct occurs at around 11-13 weeks’ of gestation in utero and this fusion and absorption is unidirectional from caudal to cephalad end as stated by Crosby and Hill in 1962.[3] The case described here is a Mullerian anomaly with partial septate uterus with double cervix and a partial longitudinal vaginal septum. Some cases may be asymptomatic whereas other cases in the past have presented with unilateral obstruction, pelvic mass, dysmenorrhea, infertility, poor reproductive outcome. In such anomalies, fetal survival rates ranges from 10% to 75%; premature birth rates range from 9% to 33%, and spontaneous abortion rates range from 26% to 94%.[4] Our case had a successful pregnancy outcome by cesarean section at 40 weeks of gestation with no significant intra or postpartum complications.

A 22 year old, Gravida 2 Para 1, with one living issue, was admiited at 40 +1 week of gestation in early labor. She had a previous full term cesarean section in view of meconium stained amniotic fluid but no details were available. On examination, vital parameters were stable, on abdominal examination uterus was full term, cephalic presentation with FHS 140/min and activity of 1/10/10-15; Pfannensteil scar of previous LSCS was present. On vaginal examination a longitudinal septum was present in vagina, bicollis cervix present, and the right cervix was 2.5 cm dilated, 50% effaced, vertex presentation, station -2, membranes present. The left cervix admitted tip of the finger and was poorly effaced. In view of the vaginal septum, speculum examination was done; a partial longitudinal vaginal septum was visualized. 2 cervices were seen, one on each side of the septum, fetal head was seen through the right cervix. Patient was taken for emergency LSCS in view of Mullerian anomaly with previous LSCS. Permanent sterilization by bilateral tubectomy was also done.
Intraoperative findings were suggestive of smooth uterine contour (Figure 1) with partial uterine septum arising from the fundus of the uterus not reaching the isthmus (Figure 2). Fetus was present in longitudinal lie in the left half of the uterine cavity. Two cervical openings were seen. Both the fallopian tubes and ovaries were normal. No intraoperative or postoperative complications occurred and patient and baby were discharged on day 5. 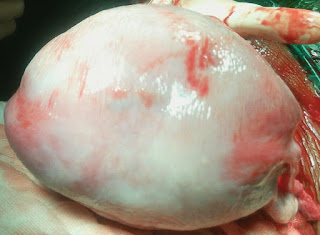 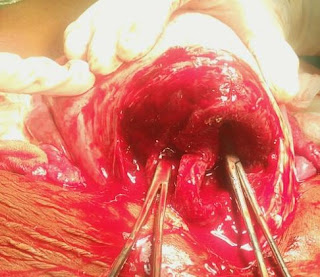 Uterine development results from the fusion of the Mullerian ducts during the 11-13th weeks of embryonic life. Septal resorption follows thereafter, starting at any point of fusion and moving in either or both directions.[3] The presence of septate uterus with double cervix and longitudinal vaginal septum challenges this theory.  The case reported by us cannot be explained by this theory, because the presence of two cervixes and vaginas is suggestive of a failure of caudad fusion while a partial septate uterus indicates normal cephalad fusion with failure of septal resorption superiorly.
Our case can be explained by an alternative embryologic mechanism hypothesis which propounds that fusion of the Mullerian ducts begins at the isthmus of the uterus and then moves both cranially and caudally, simultaneously. Midline resorption also begins at the isthmus and first moves caudally, to unify the cervix and vagina, and later cephalad to resorb the uterine septum. The dual cervix and vagina present in our case could be explained by failure of fusion of ducts in the caudal direction, beginning at the uterine isthmus. The partial septate uterus with normal fundus would result from failure of septal resorption superiorly after normal fusion.
The anomaly in our case does not fit into the Mullerian classification systems described by American fertility Society. However as per the ESHRE/ ESGE classification the anomaly can be classified as U2a – partial septate uterus, C2 – double cervix, V1 – longitudinal non-obstructing vaginal septum [5].
Patients with this type of anomaly described in literature have presented with a variety of symptoms, including severe dysparuenia, dysmenorrhea, infertility and recurrent pregnancy loss; some have been asymptomatic. Diagnosis of such anomalies is made by careful examination, followed by imaging. MRI has been the best non-invasive method for diagnosis of Mullerian anomalies. Treatment is usually planned in symptomatic patients which may include resection of the vaginal septum. Hysteroscopic resection of uterine septum with laparoscopic assistance can be performed. Some patients may however require metroplasty.[6]

As Mullerian anomaly in our patient was incidental finding and patient opted for permanent sterilization method of tubectomy no further treatment of septum resection was required. Only symptomatic patient of Mullerian anomalies should be treated.